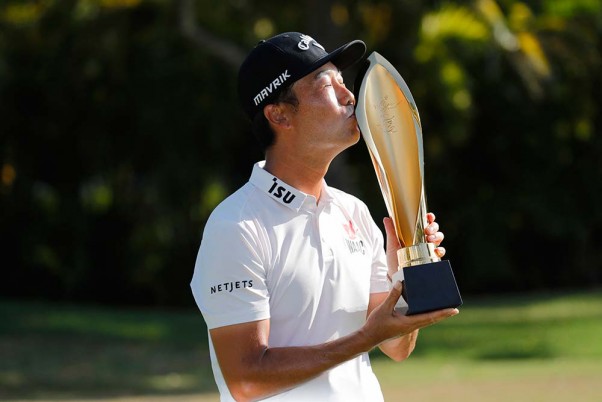 Kevin Na kisses the Sony Open trophy after winning the final round of the Sony Open golf tournament, Sunday, Jan. 17, 2021 at Waialae Country Club in Honolulu. 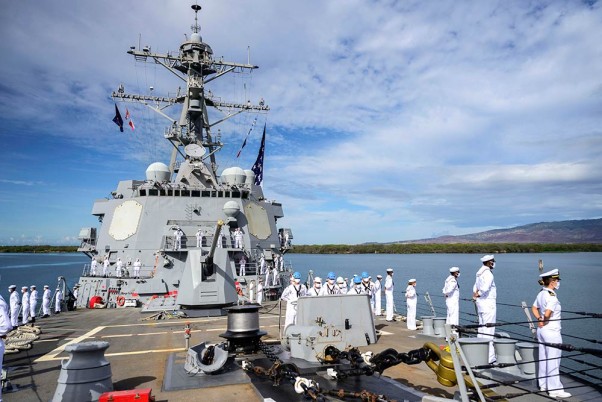 In this image provided by the U.S. Navy, sailors man the rails as the guided-missile destroyer USS Michael Murphy (DDG 112) prepares to pass the Battleship Missouri Memorial and USS Arizona Memorial during the official ceremony for the 75th anniversary of the Japanese surrender that ended World War II, in Honolulu, Hawaii. 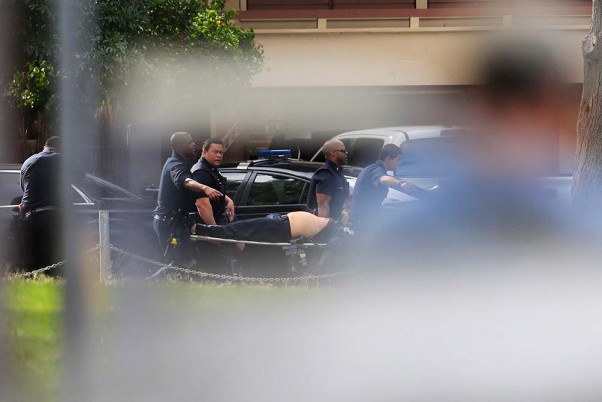 Honolulu police carry an injured officer after a shooting and domestic incident at a residence on Hibiscus Road near Diamond Head in Honolulu. Witnesses say at least two Honolulu police officers were shot and two civilians were injured. 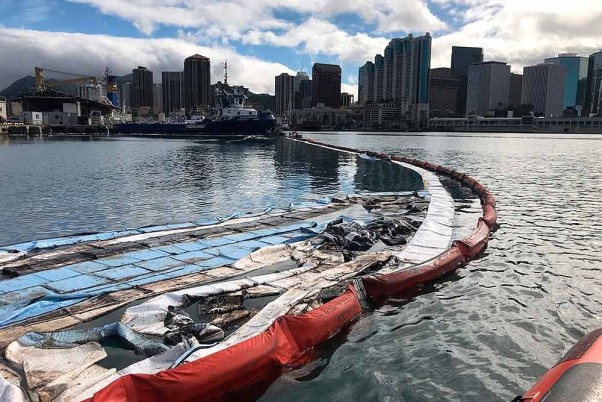 In this photo provided by the U.S. Coast Guard, their crews and other local agencies respond to an oil discharge from vessel Kamokuiki at Pier 19 in Honolulu. Two response vessels arrived on scene and deployed 1,600 feet of hard boom surrounding the 25 bales of absorbent material. 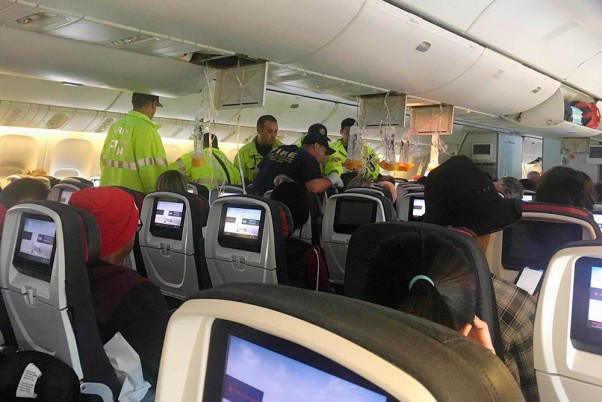 In this photo provided by Hurricane Fall, responders treat a passenger on an Air Canada flight to Australia that was diverted and landed at Daniel K. Inouye International Airport in Honolulu. The flight from Vancouver to Sydney encountered "un-forecasted and sudden turbulence," about two hours past Hawaii when the plane diverted to Honolulu, Air Canada spokeswoman Angela Mah said in a statement. 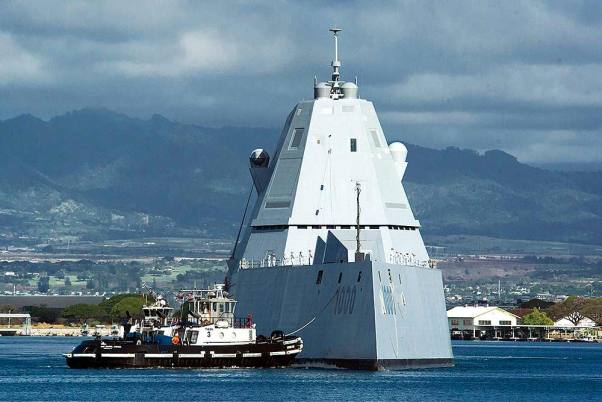 The lead ship of the U.S. Navy's newest class of guided-missile destroyers, the USS Zumwalt (DDG-1000), is assisted by a tugboat at Joint Base Pearl Harbor-Hickam in Honolulu. The ship's arrival marks the first time Zumwalt has visited Pearl Harbor. 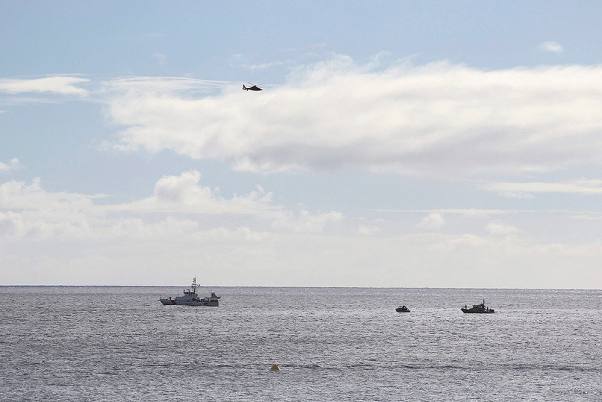 A U.S. Coast Guard helicopter flies over rescue boats at the scene of plane crash off Honolulu. Federal Aviation Administration spokesman Ian Gregor said a Hawker Hunter jet went down in the ocean around 2:25 p.m. after taking off from Honolulu's airport. U.S. Coast Guard spokeswoman Petty Officer Sara Muir said the pilot is in stable condition after being rescued about 3 miles (4.8 kilometers) south of Oahu near Honolulu's Sand Island. 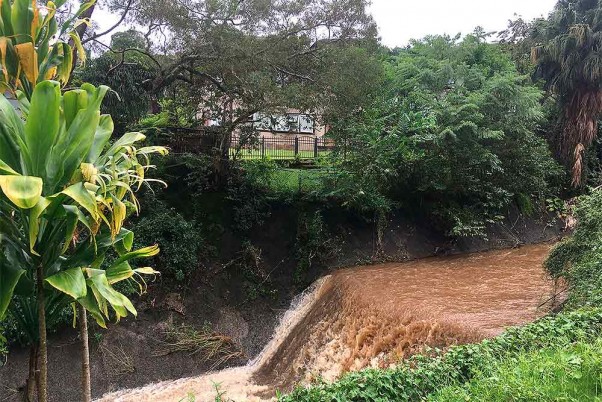 Water is seen rushing through a spillway in a neighborhood below the Nuuanu Dam in Honolulu. Honolulu officials say they may need to evacuate 10,000 people from a residential neighborhood if water in the reservoir continues to rise after heavy rains from a tropical storm. 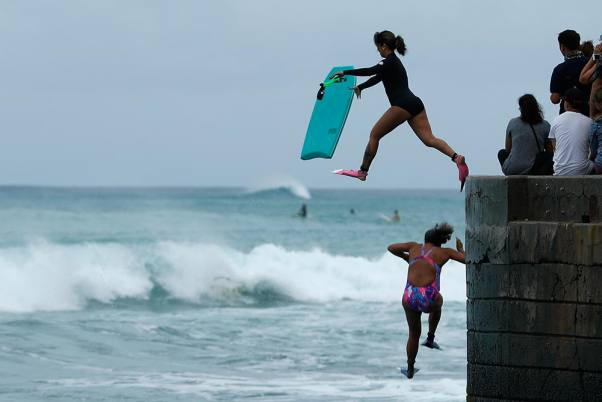 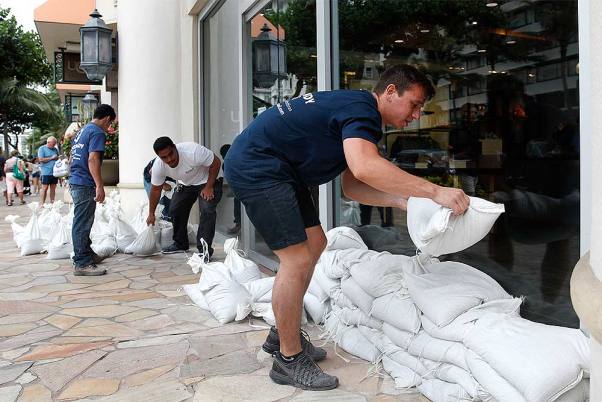 Austin Seawright, right, stacks sandbags in front of a closed store in preparation for Hurricane Lane in Honolulu. Forecasters say Hurricane Lane has shifted course and is now moving closer to Hawaii. 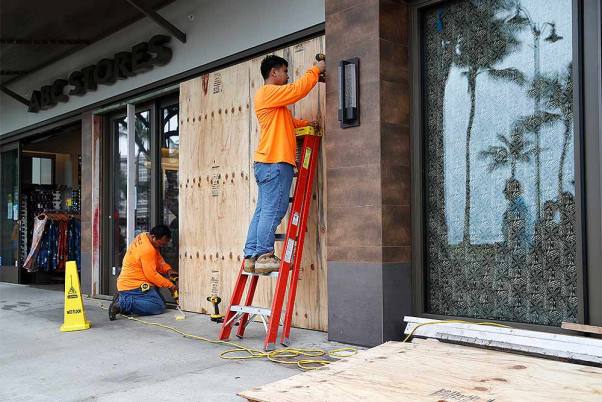 Workers board up an ABC Store near the beach in preparation for Hurricane Lane, in Honolulu, Hawaii. 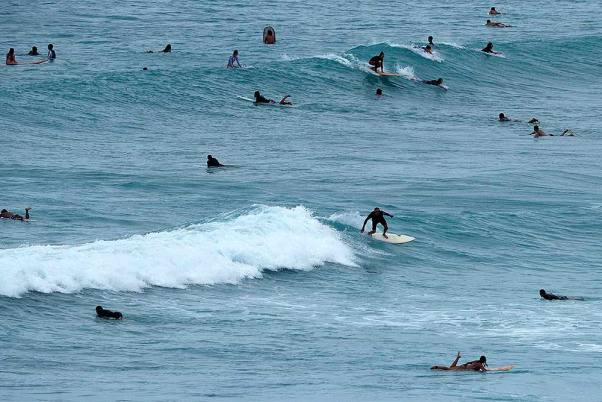 People surf off Waikiki Beach ahead of Hurricane Lane, in Honolulu. 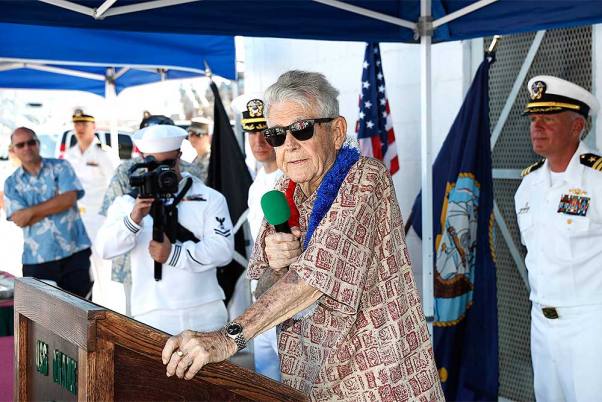 Pearl Harbor survivor Ray Emory speaks at a ceremony honoring him, in Honolulu. Emory, who served aboard the USS Honolulu during the 1941 attack, is moving back the mainland and wanted to visit the site where his former ship was moored one last time. 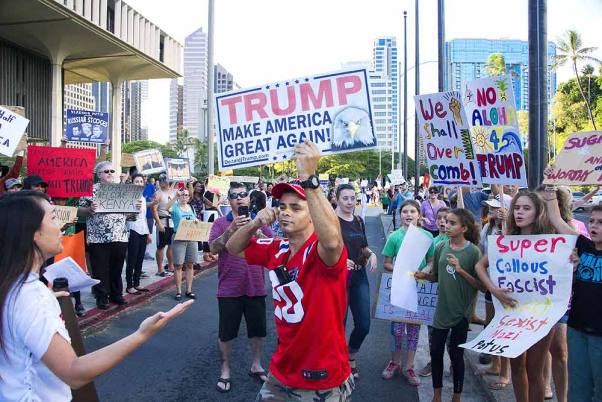 Edward Idquino, center, who holds a Trump Make America Great Again sign confronts a anti-Trump crowd protesting at the capitol in Honolulu. President Donald Trump stopped in Hawaii on the eve of his first visit to Asia. 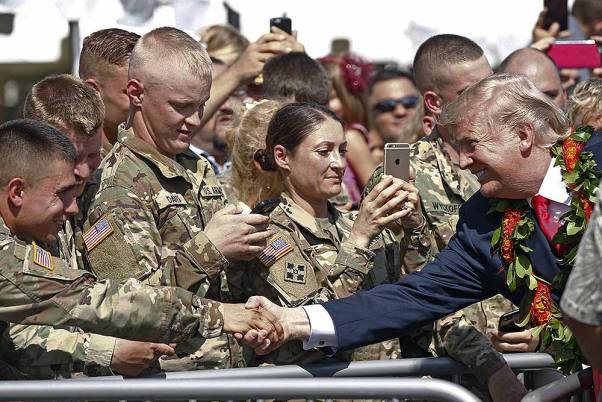 President Donald Trump greets servicemen after arriving aboard Air Force One, at Joint Base Pearl Harbor Hickam in Honolulu. 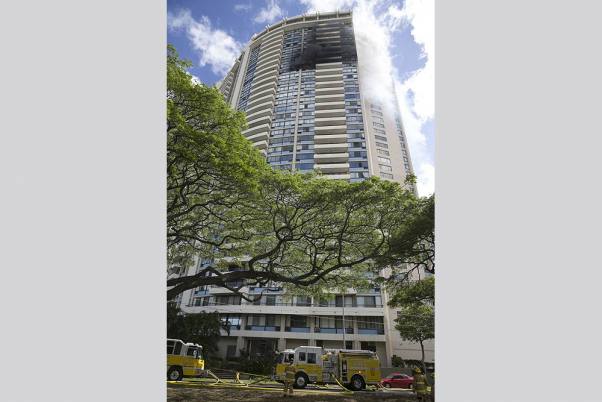 Firefighters work at the scene of a multiple-alarm fire at the Marco Polo apartment complex, in Honolulu. 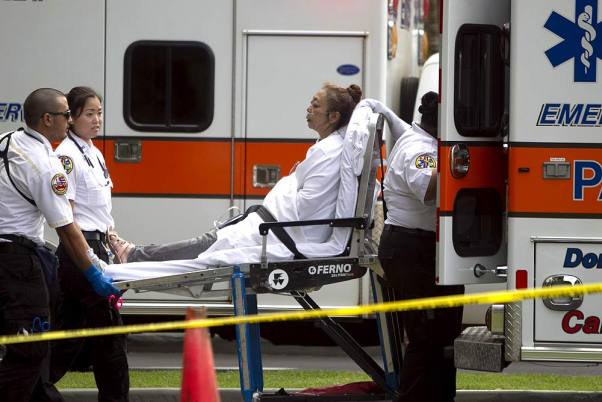 A woman, who exited the Marco Polo apartment complex, is placed in an ambulance as firefighters continue to battle the blaze at the high-rise, in Honolulu. 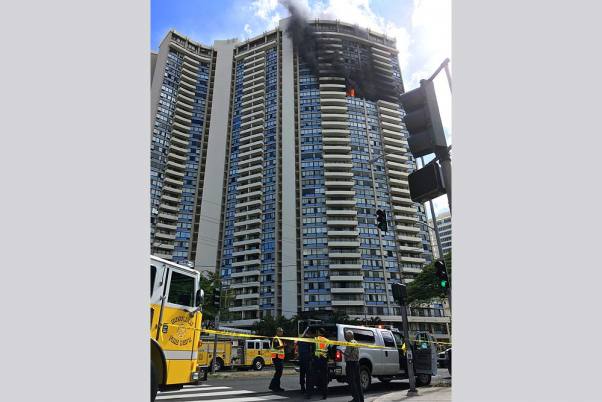 Law enforcement officers stand at the scene of a multi-alarm fire at the Marco Polo apartment complex in Honolulu. 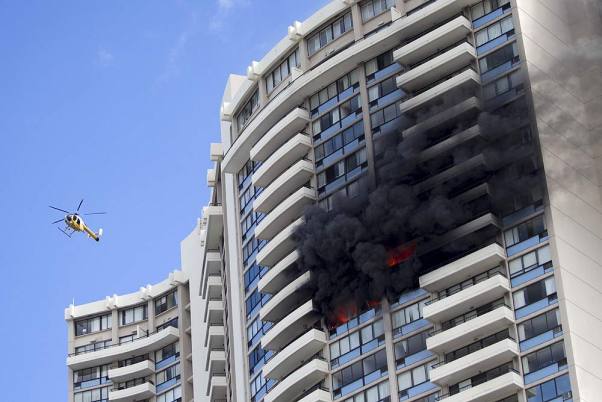 A Honolulu Fire Department helicopter flies near a fire burning on a floor at the Marco Polo apartment complex, in Honolulu. 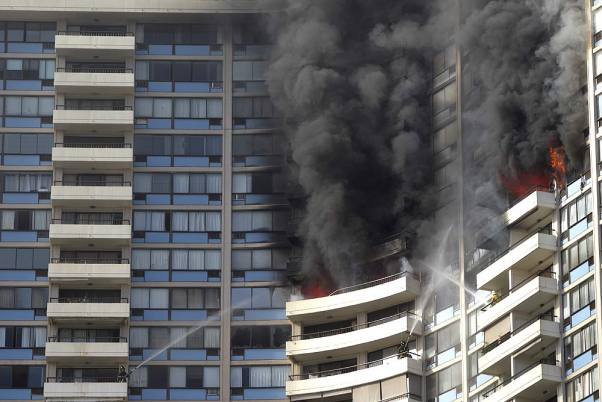 Firefighters on several balconies spray water upwards while trying to contain a fire at the Marco Polo apartment complex, in Honolulu.

Injured being treated after clashes during the...

A health worker collects a nasal sample for...