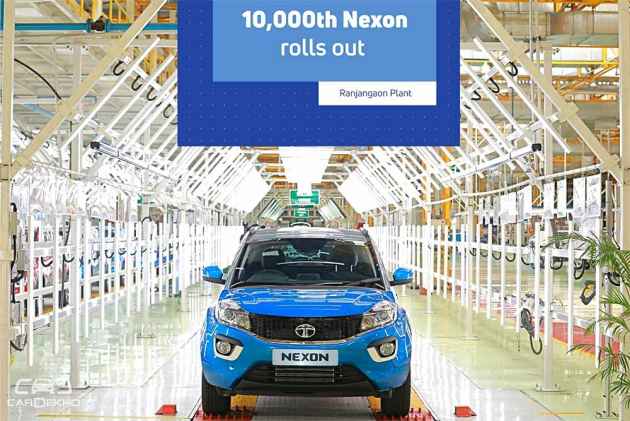 Tata is riding high with its first sub-4m SUV, the Nexon, which was launched on September 21, 2017. The company rolled out the 10,000th unit from its Ranjangaon facility near Pune that it shares with Fiat (the Jeep Compass is also manufactured here) on November 30, 2017.

Tata has achieved this milestone in just over four months since the Nexon went into production on July 20, 2017 and within three months since the car’s launch. Tata has priced it pretty competitively undercutting almost the entire segment, including its prime rivals, the Maruti Vitara Brezza and the Ford EcoSport.

Though it sits below, in terms of sales, compared to Tata’s bestselling model, the Tiago (6-8k monthly), the Nexon is doing decently for the automaker with average sales of around 3,000 units every month. However, the sub-4m crossover space’s bestseller, the Maruti Suzuki Vitara Brezza, is miles ahead compared to the Tata Nexon, with monthly sales between 11-15k units. This is despite the Brezza not offering a petrol engine, unlike the Nexon and the EcoSport. Further, the thoroughly updated Ford EcoSport has also recently entered the equation. Being the most loaded vehicle in its class, the 2018 EcoSport is expected to see a bump in sales compared to the pre-facelift model, which was already doing good (around 4k units monthly).