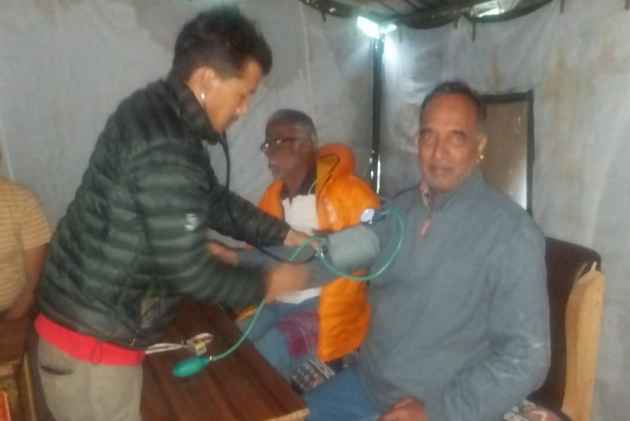 Over 100 Indian pilgrims were evacuated from Simikot in Nepal today as rescue work intensified to bring back safely more than 1,500 Indians who have been stranded in Nepal's mountainous region due to heavy rain while returning from the Kailash Mansarovar pilgrimage in Tibet.

"So far 104 pilgrims have been rescued from the site. Seven commercial flights have so far been operated for the rescue works," an Indian Embassy official told PTI.

Four embassy staff, two each in Simikot and Tibet, have been deployed with necessary facilities so that the stranded pilgrims could contact with their home in India, the official said.

Nepal: Indian Embassy in Nepal has pressed in service of a medical personnel to do check up & medical aid of 250 pilgrims stranded in Simikot. The pilgrims who were on pilgrimage to Kailash Mansarovar have been stranded in Simikot due to inclement weather condition in the area. pic.twitter.com/WYki5DZbeO

Leela died suddenly at his hotel as he returned after visiting Mansarovar, while Laxmi died in Taklakot, Deputy Superintendent of Police Rabin Shrestha was quoted as saying by the Kathmandu Post.

Earlier, the Indian Embassy here said in a statement that there are about 525 Indian pilgrims stranded in Simikot in Humla district, 550 in Hilsa others on the Tibet side.

The embassy is continuously monitoring the situation along Nepalganj-Simikot-Hilsa route of Kailash Mansarovar Yatra (through Nepal), the statement said, as the weather remains inclement.

The embassy said it has placed its representatives in Nepalganj and Simikot, who are personally in touch with every stranded pilgrim. They are ensuring that proper food and lodging facilities are available to the pilgrims.

They have been told to accord first priority to clearing up the situation in Hilsa, which is lean in infrastructure compared to other areas.

The embassy has also asked all tour operators to try and hold pilgrims back on the Tibet side as far as possible since the medical and civic facilities on Nepal side are inadequate.

In Simikot, a health check up has been carried out on all the elderly pilgrims and they are being provided required medical help.

The mission is also looking at various alternatives to evacuate the stranded people from Simikot, including through alternative routes through Simikot-Surkhet/Simikot-Jumla/Simikot-Mugu.

India has also requested the Nepal government for army helicopters to evacuate the stranded Indian nationals.

The embassy has already set up a hotline for pilgrims and their family members, which also comprises other language speaking staff for Tamil, Telugu, Kannada and Malayalam speakers.