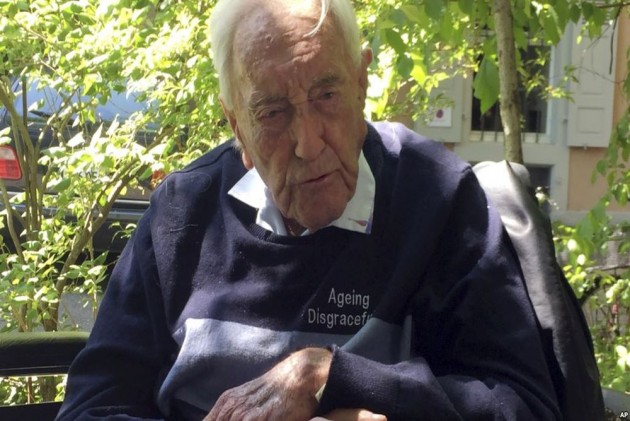 A 104-year-old Australian scientist, resentful that he was forced overseas to die, is set to address the media in Switzerland on Wednesday, a day before he is due to end his life.

David Goodall does not have a terminal illness but says his quality of life has deteriorated and that he wants to die.

He was barred from seeking help to end his life in Australia, so he was forced to travel to Switzerland.

"I don't want to go to Switzerland," Goodall told broadcaster ABC before he set off on his final voyage a week ago, adding that he had to "get the opportunity of suicide which the Australian system does not permit".

"I feel very resentful," said the honorary research associate at Perth's Edith Cowan University, who arrived in Switzerland on Monday.

He will speak to the media in the northern Swiss city of Basel later Wednesday alongside the head of Exit International, the Australian right-to-die group that helped Goodall make the trip.

"This conference will be Professor Goodall's first and last conference before his final Exit appointment" tomorrow, the organisation said in a statement.

Goodall, who according to Exit International attempted but failed to commit suicide on his own earlier this year, secured a fast-track appointment with assisted dying foundation Eternal Spirit in Basel.

Assisted suicide is illegal in most countries and was banned in Australia until the state of Victoria became the first to legalise the practice last year.

But that legislation, which takes effect in June 2019, only applies to terminally ill patients of sound mind and a life expectancy of less than six months.

According to Swiss law meanwhile, anyone who is of sound mind and who has over a period of time voiced a consistent wish to end their life can request so-called assisted voluntary death, or AVD.

Eternal Spirit, one of several foundations in Switzerland that assist people who want to end their lives, said today that Goodall had undergone two medical visits by different doctors since arriving in the city.

"Tonight the board of the foundation will study the documents and also judge the wish to die of David Goodall," Eternal Spirit head Erika Preisig said in an email.

"So his wish to die is checked by two doctors and three people of the foundation's board. If all five persons give their ok, Goodall will be able to open the infusion tomorrow."

"That all five will accept his wish to die is quite likely, as David Goodall is in a very advanced age, suffering from several degenerative illnesses and most important of all, he is of sound mind," she added.

In assisted dying, the person must be physically capable of carrying out the final deed on their own.

Since the substance is alkaline and burns a bit when swallowed, Eternal Spirit has instead opted for intravenous infusions.

A professional prepares the needle, but it is up to the patient to open the valve that allows the short-acting barbiturate to mix with a saline solution and begin flowing into their vein.

Eternal Spirit is advocating for all countries to introduce systems like the Swiss one, allowing people to choose to die "in dignity".

"I do hope the law in all countries will change, so the fights of very brave people like David Goodall... Will be successful and no-one will have to travel to Switzerland any more for a peaceful self-determined death," Preisig said.