While in most of the cases, the chargeable amount of GST has gone down to 5%, many food chains continued to charge 18% still. 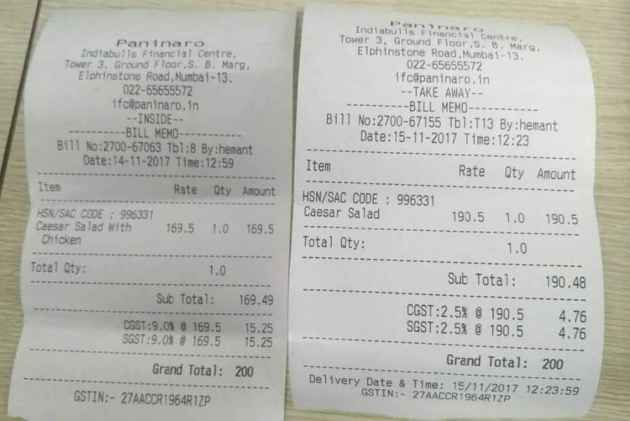 Customers, who expected to end their meals on a happy note following the big slash in the Goods and Services Tax on restaurants and food chains, came out flummoxed after noticing 'unchanged' bill amount.

Many consumers on Thursday took to the micro-blogging site Twitter to register their anguish. Their complaint-- bill total remains same even after a 13% cut in tax rates.

The government had last week announced a rate brought down the tax levied on all the restaurants to 5%. Earlier the air-conditions restaurants paid 18% GST, while non-AC restaurants 12%. the government also removed the "Input Tax Credit" system leading to confusion.

While in most of the cases, the chargeable amount of GST has gone down to 5%, many food chains continued to charge 18% still. A comparison of McDonald's bill from today and earlier this month shows a steep increase in the price of their goods.

Not only MacD.. Online chains too.. @ndtv pic.twitter.com/YZJCk1imXz

It's all over not only with @mcdonaldsindia see this. #GST pic.twitter.com/WiIjHEsLe4

Many outlets did not even implement the change. At the time of paying tax on the final product that is generally called the "output product", a registered taxpayer can deduct the tax amount that goes while purchasing the raw products that goes into the making. This tax amount is called the "input tax credit" which also applies to the service sector.

In fact this was one of the prime features of the Goods and Services Tax that was rolled out earlier this year. Just like income tax refund , the input tax credit gets automatically credited into the company's account. As the government slashed down the GST from 18% on the air-conditioned restaurants and 12% on the non air-conditioned ones to 5%, it also decided to do away with the input tax credit system, hitting the service providers hard.

In the garb of this excuse many restaurants and food chains overnight  decided to spike the prices of most of the items that reflected on their menu card. Fast food chain Mc Donald's India called it a deterrent that led to change in food menu prices. "Due to this (removal of input tax credit), our operating costs have gone up. However, keeping customer convenience in mind, we have structured the changes in such a manner that total amount paid by the customer remains the same," said the company in series of tweets addressing the consumer grievances.

The Government has brought down GST from 18% to 5%, but there has been a removal of Input Tax Credit.[1/3]

Due to this, our operating costs have gone up. However, keeping customer convenience in mind [2/3]

we have structured the changes in such a manner that total amount paid by the customer remains the same. [3/3]

The customers, in no way are ready to accept the explanation though.