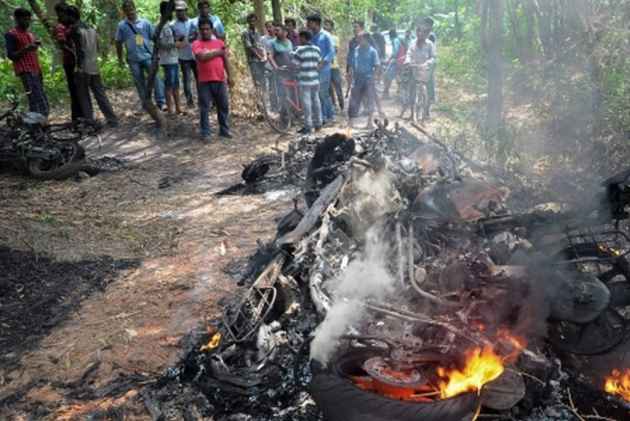 “Why don’t the political parties of West Bengal just get on the battlefield and fight it out like a war?” Howled a vegetable seller from West Bengal’s South 24 Paragana District.  “Why the farce with democracy?” He argued that what is playing out in the state is nothing but a civil war, anyway.

He sat with his hand on his head, beads of sweat running down the side of his face and tears rolling down his cheeks. He does not want to be identified. He just got news on his mobile phone, that one of his brothers, a BJP worker, was injured in a clash with political rivals.

It is Monday, May 14.  At least 16 people are reportedly killed in the violence  during the panchayat polls today. Voting had kicked off early in the day. At seven, to be precise, exactly as scheduled. But by midday, according to the vendor, “Nothing…absolutely nothing…went as per schedule.” Reports of violence ripping through parts of the districts were polling was underway were first trickling in and then flooding newsrooms across Calcutta. Images of gun-toting, knife-wielding goons were captured by television news cameras and beamed across channels. The thugs, allegedly musclemen belonging to the ruling Trinamool, seemed nonchalant as they strutted about brazenly brandishing their weapons, their faces barely covered with handkerchiefs and towels. Often they did not even bother with that as they went about roughing up opponents, their faces – not to mention actions - fully being broadcast live.

The vendor told Outlook, “My brother wanted to contest the elections but his wife told him, ‘Over my dead body.’

A farmer from an adjoining shop muttered under his breath, “Actually, everything is going according to schedule. Everyone knew there would be bloodshed today.”

The Panchayat elections of 2018 has been jinxed since the word go. As soon as the poll dates were announced and the process of filing nomination documents started in early April, the trouble started.

Opposition political parties, BJP, Congress, CPI(M) and Left parties claimed that they were prevented from submitting their papers by Trinamool gangs. Though Trinamool has denied the charges, then too the evidence had tumbled out in to the public domain. News cameras had captured candidates being physically dragged out of the chambers of the block development officers, hit, kicked, punched slapped, thrown on the ground and thrashed with sticks and rods. At least one candidate had been stabbed and one shot at. Several people died in the clashes that ensued. Not just the physical assault, but the psychological intimidation of candidates had taken place though this was underreported. In a village in South 24 Paragana District’s Bhangar, a CPIM candidate told Outlook, “The goondas came to my house at night and threatened to kidnap and kill me if I contested.”

Thiry-four percent of the rural seats, in fact, are not going to be contested in these elections.

The Trinamool claims that this is because they lack the personnel. A Trinamool leader and member of Parliament told Outlook, “These parties do not have the requisite strength to contest all the seats and that is why they have not fielded candidates. Not because they have been prevented from doing so.”

Opposition parties however demanded fresh deadlines for the submission of nomination papers and had dragged the state government and the state election commission to the courts. Several cases were filed both in the Supreme Court and the Calcutta High Court, which reprimanded the SEC on several counts and ordered the organization, which is responsible for conducting rural elections, for an extension. Astoundingly, even the four-hour window (from 11 am to 3 pm on April 23) that was granted to candidates who were barred by goons from filing their nominations, too was marred with incidents of violence.  And when the window eventually closed that day, there were more reports of injury – and intimidation – though some fresh candidates did manage to file their documents. But the litigation was far from over and the Opposition parties filed more cases in the courts complaining that security arrangements had not been taken care of by the SEC to the satisfaction of the Opposition. In the midst of this the SEC announced the poll date as May 13.

This triggered a fresh round of litigation with the Opposition complaining that the a one-phase poll date cannot be a suitable replacement for the original three-phase process which was initially scheduled to take place on May 1st, 3rd and 5th. They further claimed that the security arrangements had not been taken care of. The Opposition had been demanding central paramilitary forces but the state government had said that its own police and reinforcements which it had requested from other state would suffice. A state government official told Outlook on condition of anonymity that central forces are more expensive.

Opposition however expressed concern over the neutrality of the Bengal police fearing that the force could be employed by the state to its benefit.

A fresh set of litigation ensued and next in the sequence of events, the Calcutta High Court reprimanded the SEC – not for the first time during the last few weeks – ordering it to look into the security arrangements before finalizing the dates, which in effect put a question mark on whether the polls would take place on the date announced by SEC. The SEC rushed to the apex court pleading for a stay on the HC orders. The verdict for the SEC, which had appealed to the SC also for a stay on the Calcutta HC’s order to accept all the online applications filed by candidates – arguing that this would further delay the poll dates – had gone in its favor in both counts.

When dawn broke on Monday, May13, in the villages of West Bengal, there was little of the celebratory ambience associated with elections in the state. Tension permeated the district ambience. As voters made their way to the booths, reports of rigging started to spread. Other than “booth-jamming” and “ghost voting” when party workers takeover the polling stations and randomly stamp on their party’s symbols on ballot papers to “voter intimidation”, when they threaten voters with dire consequences if they dare to vote, all the methods of rigging familiar to West Bengal elections has been witnessed today.

“What is unprecedented is the way that ballot boxes were set on fire, ballot papers thrown into the drains and how candidates were seen casting votes on behalf of the voters,” a news anchor told Outlook. “I almost fell off my chair when I found myself interviewing a woman who was ‘helping’ other voters and then claimed she was a Trinamool candidate.”
A Trinamool member of Parliament and  spokesperson told Outlook, “Trinamool has a strong presence in the grassroots of Bengal. The people will vote in favour of the development that Mamata Banerjee has brought to them. There is no need for Trinamool to indulge in violence. We are advocates of democracy.”

Trinamool leader and education minister Partha Chatterjee has furthermore alleged that the opposition parties have imported the violence into the state to stigmatize Bengal and the rural elections.

BJP has sniggered at the charge. BJP leader Chandra Kumar Bose told Outlook, “The goons are running around roughing up opposition candidates so that the seats go uncontested. It is ridiculous to suggest that anyone other than the Trinamool is behind the violence.”

Congress leader Om Prakash Mishra too dismissed the idea as “preposterous”. Speaking to Outlook he said, “It was a dangerous sign when Trinamool spoke about ensuring that Panchayat government will be formed without Opposition and today they are proving that they mean what they said.” (He is referring to a statement by Trinamool leader Suvendu Adhikari, which was later justified by his colleague Chandrima Bhattacharjee to mean that the party wanted to win every seat.”

CPIM says that such allegations do not even merit comment. CPIM member of Parliament Mohammed Selim told Outlook, “It is a black day for democracy in Bengal.”