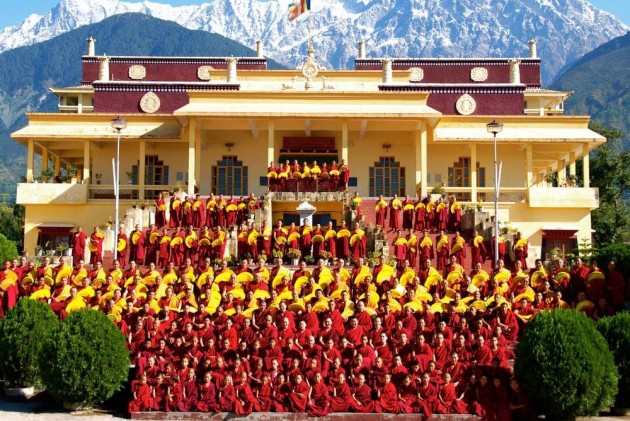 At Gyuto Tantric Monastery, one of the most famous monasteries located near Dharamshala, as many as 160 monks have tested positive for Coronavirus which has spread panic among the Tibetans and locals in Himachal Pradesh.

The fresh cases were reported at a time when the medical teams were preparing for the vaccination of Dalai Lama, the 85-year-old Tibetan spiritual leader.

Deputy Commissioner Kangra Rakesh Prajapati said that such a huge number of monks testing positive for coronavirus is a matter of serious concern for the district administration.

“The monastery was closed ever since the outbreak of the pandemic, the monks –numbering 330 were inside the place busy with their studies and meditations. I wonder how the infection reached them leaving half of them infected”, said Prajapati.

Prajapati said things were, however, under control. All the monks have been home-isolated and a team of doctors was in close contact with the Central Tibetan Administration (CTA) authorities.

He added, “All heads of the Tibetan monasteries have been asked to take precautions and maintain social distancing. This particularly being an isolated incident because all of them were together at one place is only a relief to us about infection confined to one monastery”.

Prajapati said, "Vaccination schedule for his Holiness Dalai Lama has been finalized after discussions with his office and CTA. There will be around 70 people of his staff and monks, who will get the shots. Dalai Lama has not come out of his palace since the outbreak of the pandemic".

For now, the monastery has been declared as a containment area.

Gyuto Tantric Monastery is located on Dharamshala-Palampur road outside the main town at Sidhbari. The monastery is the most fascinating place located in the foothills of the Dhauladhar ranges. It’s also a great tourist attraction having a large number of monks practicing and studying Tantric ritual arts and Buddhist philosophy.

During the past one week, Covid-19 cases have shown a fresh rise in two districts, Kangra and Shimla, even though the number of active cases had dropped significantly. Lahaul Spiti has also been declared corona-free.

Chief Minister of Himachal Pradesh, Jai Ram Thakur, has convened a meeting of the cabinet on March 4 to take stock of the situation and announce fresh measures to prevent the further spread of the infection.

Though the state government has already lifted most of the restrictions on social and political gatherings and has allowed the opening of the schools and colleges, the change in the conditions may lead to fresh restrictions.