Vizzy is appointed captain and Amarnath sent back to India on charges of indiscipline.

I have the full authority to announce that a sensational decision to send Amarnath back has been made. He is aboard the Kaiser-I-Hind, which leaves Southampton today.

At one level, the Amarnath-Vizzy clash was evidence of a plebian-patrician divide in colonial India. As a controversy, it far outlived the 1936 tour, its mix of intrigue, corruption and power play continuing to fascinate to this day. A confrontation between Vizzy and Amarnath was triggered during the match against Leicester (20-22 May). Amarnath, bowling from the pavilion end, asked the captain to remove the third man fielder and place him between cover and point instead. Vizzy snubbed Amarnath, asking him not to waste time and ordered him to carry on. After the game, Amarnath made the cardinal mistake of discussing the incident with his mates, saying he had never seen a captain refuse to assist his bowler so curtly.  News of this got to Vizzy. He called Amarnath aside and told him that as captain he could do what he liked. Things continued to get worse and came to a head during the match against the Minor Counties, which started on 17 June. Amarnath was told he would be batting at number four. However, it was Amar Singh who was eventually sent in at that position. When Amarnath asked Vizzy when he was to go in, he was told the captain had not yet made up his mind.

Amarnath was finally sent in at number seven, ten minutes before the end of the day’s play. When he protested, he was accused of indiscipline and sent back to India. Despite many attempts by his teammates Vizzy did not relent and Amarnath had to come back to India mid way into the tour. 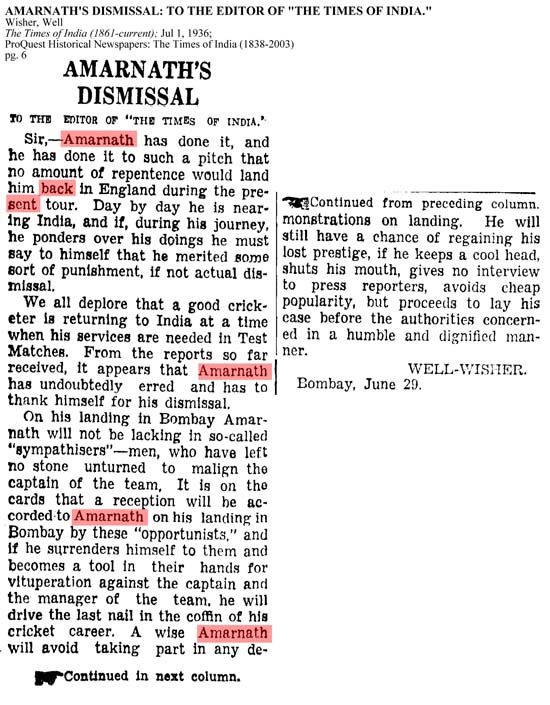