'I try to find which raags are liked by the people. We try to find out what the essence is' 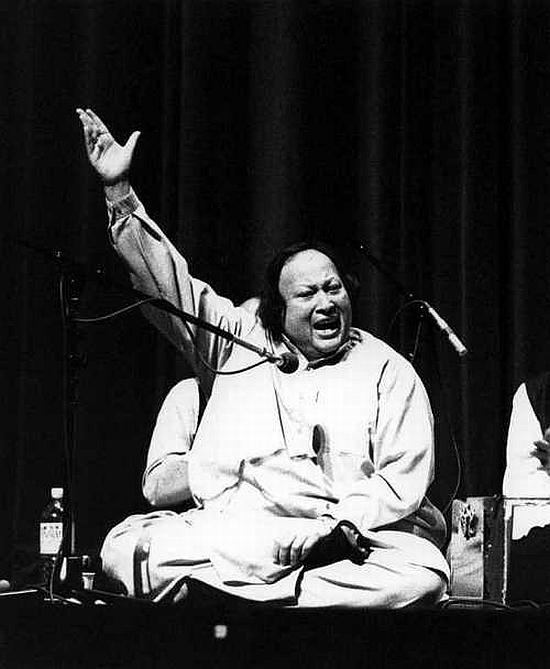 This rare January 1988 interview with Nusrat Fateh Ali Khan was first — briefly —published on the internet journal Ragavani in 2007, provided by Professor Hiromi Lorraine Sakata, Emeritus Professor at the Department of Ethnomusicology at UCLA Herb Alpert School of Music. Since the archives of the journal disappeared from the internet, we wrote to Professor Sakata who graciously provided us the interview, that was conducted by late Adam Nayyar, Director of the Pakistan National Council for the Arts in Islamabad,

Adam Nayyar: What is the musical heritage of your family?

Nusrat Fateh Ali Khan: I come from the Qawwal Bachon ka Gharana [i], which has been with us for many generations. Among the Gharanas, this is considered to be a well-established one. Many famous musicians belong to this Gharana: Ustad Fateh Ahmad Khan, Ustad Bare Mohammad Khan, Ustad Bare Mubarik Ali Khan.

Apart from these, qawwal Gharanas had Tanras Khan, who has a Gharana of his own and is the founder of the qawwals [ii]. Then there is Agan Khan, Khan Sahib Behram Khan, these are qawwals, as are Haddu Hassu Khan of the Gwalior Gharana.

Do other qawwals use so much raagdari as you do?

It is the most in our Gharana, because we place great value on classical learning in the beginning. Our elders started the foundation of classical music in the qawwali. They rendered rags correctly and composed them into the qawwali.

When did your musical education start? How old were you then?

You didn't learn anything before that?

From childhood, I had been instructed in the tablaa by my father, along with the astaais and antaraas specific to our Gharana. We were encouraged to sing khayaal from childhood, especially the tarana. My father gave me formal education in raagdari. He died in Lahore in 1964 when I was 13. I was in the tenth year of school, and my father's brother took me into the qawwali ensemble and started giving me formal education in qawwali.

At my father's first barsi [anniversary] in 1965, I gave my first performance in front of musicians. In 1965, I also participated publicly in the Jashn-e-Baharan (Festival of Spring) arranged by Radio Pakistan Lahore. That started my qawwali. Many great masters of music performed in that concert, Ustad Bare Ghulam Ali Khan, Ustad Umid Ali Khan, Roshan Ara Begum, Ustad Amanat Ali Khan and Fateh Ali Khan, Salamat Ali Khan & Nazakat Ali Khan, Ustad Ghulam Hassan Shaggan. They all gave me encouragement, because they all knew and loved my father. That was a wonderful concert, held in the open air on the lawns of the radio station during spring. They gave me 500 rupees for my performance, which was a great deal of money in those days. My opening piece was a ghazal by Amir Khusrau: Man banda e aan ruh e ke didan. It was in Farsi  [Persian]. After that, I began to take part regularly in programmes.

How did you get the title of Ustad?

Well, this was during the gathering of the Anjuman-e-Mausiqaran (Society of Musicians) and I got the title together with Ustad Shaukat Hussain Khan. I sang classical for that occasion. All the famous ustads were there when it happened, back in 1984. I was also given a shield by the society.

When I listen to older qawwalis, I notice that the rhythm is much more complex than today. What is the reason for this?

It is a sign of the times. Our times are different and fewer listeners are capable of picking up the nuances. Qawwali has changed now. In the old days, qawwali had a great deal of thehraao (contemplation) and the listeners were educated. The qawwalis of our Panjabi kafis were in very difficult taals, like a kaafi in a panjtal saavari, qawwalis in the ara chautala, a chenchal qawwali, a dhamaal qawwali. Those times had qawwalis like that.

Those times have changed now. Now, when you start Farsi, people start getting up and leaving! Those were wonderful times, because the listeners were well aware of the texts. People listened to Farsi texts, and to the great texts of our Baba Bulleh Shah, Khwaja Ghulam Farid, Mian Mohammad Bakhsh Jehlmi. People do listen to it these days, but much less than in those days.

You have a great knowledge of languages: you sing in Farsi, Panjabi, Urdu and Purbi. However, I have noticed that when you sing in Panjabi, there is a much deeper expression in your music.

There are two languages that I love: Farsi and Panjabi. Because the depth of Sufi thought in these two languages cannot be found in any other language. Panjabi is a language of ma’rifat (gnosis) and that is why so many masters of the past have written in it. The qaul and tarana of Hazrat Amir Khusrau are in Farsi in a set melody and bandish and there are taranas in his Purbi compositions. Panjabi does not use the tarana in qawwali.

Now what about the rang? What is this all about, people standing up whenever the rang is recited?

This is an invention of Amir Khusrau. He saw a vision of the Prophet (May Peace Be Upon Him) with his master sitting in the gathering of the Prophet. The following morning, he wrote these words in a state of ecstasy: aj rang he ri ma rang he ri, more mehbub ke ghar rang he. This why we give this composition so much importance in India and Pakistan, Gwalior, Ajmer Sharif, Nizamuddin Auliya. The listeners know the importance of this, and the good manners and respect due to it. At the end of the urs of Data Sahib, it is recited. It is believed that when the rang is recited, the old masters come to the gathering along with the Prophet. It is a gesture of respect that people stand up.

Apart from Data Sahib, where else do you perform qawwali?

Do you have a silsila of your own?

People say that your qawwali is very innovative. Can you explain this?

Innovation is there because the time demands it. We have to go out of the country, too and people out there don't know our language. Whatever we do for them with tempo, they accept it. We can only give them the rhythm, the classical pieces, the sargam in the hope that the text we are singing will filter through to them in this manner. If there is an audience who doesn't understand the text at all, they will still be moved by the music. It then becomes more of an art. Don’t you remember, you saw it yourself in Japan when you were with us.

Have you ever thought of singing in a language that is not from our area? I heard Salamat Ali Khan singing in French, which quite startled me.

I have thought about it.

If they have sufi poets, their texts...

That is a very beautiful idea, a good thought, it can happen.

I have noticed that apart from singing in these high places, you still go to very small modest villages to sing as well.

Yes, the villages of the Punjab are our foundation. We trace our beginnings to the village. These people come from the Doaba and moved with us from India to settle in villages here. If I don't sing in the specific style of the Doaba, the Panjabi ang, people will not be happy. Most of them have settled in villages around Faisalabad. It affects the earlier people as well.

Now you also perform here near Gujar Khan. Are these also settlers from the Doaba?

No, they are Pothwaris, but they love qawwali. There is the famous shrine of Kalyam Sharif which is a Chishti-Sabri shrine and is famous for qawwali. Pir Mehr Ali Shah went to him for allegiance. Khwaja Suleman Taunsvi sent him there. It is because of Kalyam Sharif that people of this area have a deep consciousness for listening to the qawwali.

Which city of Pakistan do you think has the best listeners of qawwali?

Lahore. Then there is Karachi.

What about other qawwals like Aziz Mian, do they have a classical education?

No. They just memorize the texts, we give equal weight to both text and music. We also depend on our mood, the mood of the audience and the place where we perform. You may have noticed that no two qawwalis of the same text are ever the same. We never fix the rendition. If we have our people of the Doaba, they prefer to have a more contemplative voice, so the rendition is different. Some people just listen to the text, they don't know which raag and which rhythm is being applied. They are linked to the text, but we have to bring them up to a certain level. It is always our endeavour to pull the people in and teach them about the complexities of the music while they are enjoying the texts. We ensure that even if they don't understand the complexities, they shouldn't lose interest in it.

You mean that you bring classical music to the people instead of leaving it only for the enjoyment of the elite.

We try to do this and this is also our mission.

I also notice that you work very hard before a concert. When I was in Japan with you, I noticed that you were watching Japanese television. I wondered why you were doing this and you explained that we try to find out their system of music.

Yes, they have raags too, but with different names, I try to find which raags are liked by the people. We try to find out what the essence is.

How long do you practice?

Practice has reduced significantly, because we have such a full schedule. If we have any spare time, then I feel like passing the whole day in practice. In the old days, we practiced for 10 hours every day. We had that room downstairs, we closed the doors and had no notion of night and day. My father and uncle used to sit there for hours.

Have you passed on your art to someone else?

In our family, we have some children who are learning, we are teaching them classical. My nephew Rahat Ali is our greatest hope, we teach him classical. But he has to study and cannot work long hours that our art demands. He even plays the tabla all by himself. By the grace of Allah, we will move forward.

[i] Literally, “the house of Qawwal Children” representing the primordial qawwali group of 12 children said to have been assembled by Amir Khusro in the 13th century ACE for a musical dialogue with a Hindu religious luminary. Also the name given to a school of khayaal gaiki founded in the 19th century. It is said that the last Mughal emperor Bahadar Shah Zafar (1775-1862) passing by heard a group of young boys singing sweetly and exclaimed, “They are worthy of classical music!” and started extending patronage to them, resulting in the formation of this school.

[ii] Munshi Raziuddin Qawwal of Karachi is the direct descendant of this particular lineage.

Mouthpiece For The Divine