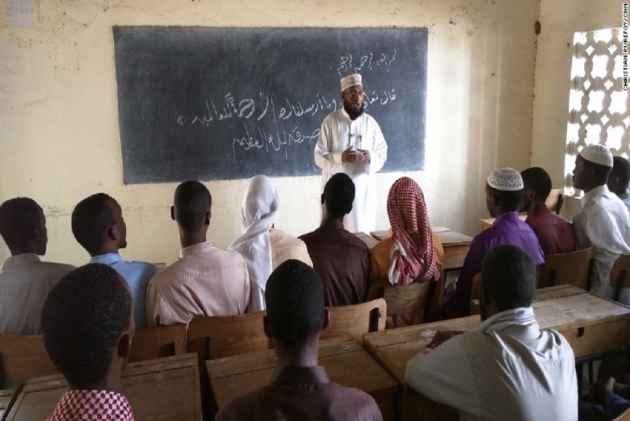 Nearly 2,300 madrassas in Uttar Pradesh run the risk of losing their recognition for not submitting their details on the website of Uttar Pradesh Madrasa Board, UP minority welfare minister said today.

"In Uttar Pradesh, there are 19,108 madrassas, which have been recognised by the state Madrasa Board. Of these, 16,808 madrassas have submitted their information on the website of the board. There are no details submitted by nearly 2,300 madrassas," Chaudhary told PTI in an interview here.

"Now where are these madrassas? We are considering them as fake. There is a possibility that action may taken against these madrassas by end of January," Chaudhary said.

However, he added, the state government will wait till month-end for the madrassas to furnish information on this regard.

"The government-recognised madrassas, which have not furnished their relevant details on the website can approach the government in case they face any difficulty. If they tell us their problems, we may help in resolving them," he said.

With that said, the minister also made it clear that no student of the registered madrassa will be deprived of the opportunity to appear for any examination.

"We had extended the last date for submission of details by madrassas on the web portal of the department a number of times. Dates were extended on July 15, 2017, July 30, 2017 and on August 15, 2017. But, surprisingly no student, teacher, principal or manager of any of the 2,300 madrassas approached us," Chaudhary said.

Taking a jibe at opposition parties for blaming the UP government and giving the matter a political twist, he said the aim of the government is to ensure proper education system in madrassas.

"The aim is to ensure there is no exploitation of teachers and other staff and that the scholarship is directly transferred to the account of the students," he said.

The minister noted that the present government has "effectively rendered the mafia useless" by putting a stop to the old practice of money being transferred from a district minority officer to the account of madrassa management.

He also pointed out a Rs 20 crore madrassa-related scam in Shahjahanpur district, adding that a vigilance probe has been ordered into it.

"It also came to our notice that one student was enrolled at more than one madrassa. Similarly, there were teachers who were relatives of the madrassa management members," the minority welfare minister said.

"The disputes pertain to that of management, recognition and building parameters. The director of the department has been asked to resolve the dispute within a month. Once the disputes are resolved, the salary will be disbursed," he said.

Chaudhary asserted that the intention of the government is not to stop the salary of anyone.

Meanwhile, registrar of Madrasa Board Rahul Gupta said, "The deadline to submit information on the departmental website has expired. As a result, the registration of 2,300 madrassas will be cancelled."

"This year, as many as 3,691 aaliya level (above class 8th) madrassas have been registered. Students of these madrassas

will be allowed to sit in board examination. The last date to fill examination form is January 15," he said.

However, the Teachers' Association Madaris-e-Arabia (a body of madrassa teachers) demanded that before taking any action against madrassas, their background should be verified.