The Minister for Medical and Family Welfare said the samples of the 28 passengers have been sent for genomic sequencing analysis. 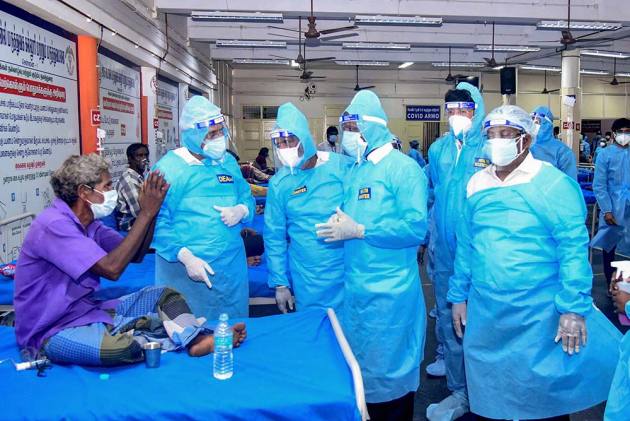 As many as 28 people who arrived from both 'high-risk' and 'non-risk' countries till date have tested Covid-19 positive along with S-gene drop, raising the suspicion of being infected by Omicron, Tamil Nadu Minister Ma Subramanian said on Friday.

The Minister for Medical and Family Welfare said the samples of the 28 passengers have been sent for genomic sequencing analysis. Talking to reporters here, Subramanian said he would seek the Centre's approval to hold mandatory RT-PCR testing on passengers arriving from 'non-risk' countries on completion of their seven-day home quarantine.

The decision to seek Centre's approval to mandate conducting of such sampling on completion of their home isolation was in the backdrop of the State detecting the first case of Omicron after a passenger who arrived from Nigeria, a non-risk country.

Subramanian said he would write a letter to the Centre in this connection stating passengers should mandatorily undergo RT-PCR testing on completion of home isolation and only then they should be allowed to go out in public.

He said till date 14,868 people who had arrived in Tamil Nadu from both 'high-risk' and 'non-risk'  countries had undergone Covid-19 testing, of which 70 people tested Covid-19 positive and 65 of them were under treatment while five testing negative.

"The samples of the 28 passengers have been sent for genomic sequence analysis. Results of 10 people have been declared in which eight have been tested for Delta variant, one Omicron variant (December 15) and another non-sequence. The sample of the passenger who has been declared as 'non-sequence' will be tested again", he said.

Subramanian said health department officials were in the process of conducting RT-PCR testing on 278 people who were contacts of the passenger who was confirmed with Omicron variant in Tamil Nadu on arrival from Nigeria.