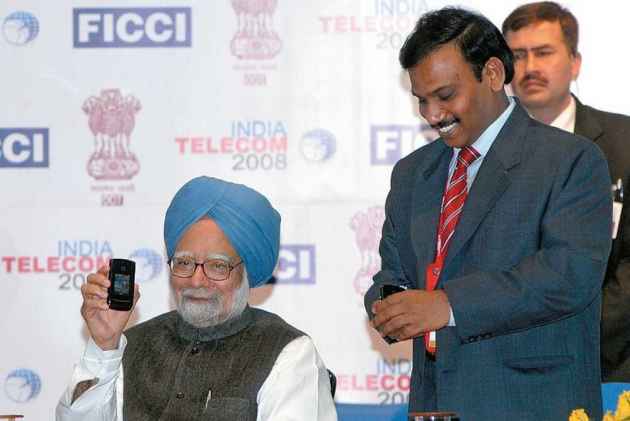 In a tell-all book published a month after his acquittal in the 2G spectrum scam case, former telecom minister Andimuthu Raja has questioned former Prime Minister Manmohan Singh's "palpable silence" in defending the telecom policy that he himself had approved.

In his book '2G Saga Unfolds', Raja slammed the then CAG Vinod Rai saying the office of the Comptroller and Auditor General was "severely compromised" by Rai who had "ulterior motives" in over-reaching his constitutional function while auditing accounts relating to the 2G spectrum allocation.

Raja, who wrote the book during the trial of the case, claimed that he had got Manmohan Singh's "approval to go ahead" for allocating 2G telecom spectrum to new players after he explained the whole process and that there was enough spectrum available.

Singh, he went on to claim, was repeatedly misinformed by his advisers and that telecom lobbies had influence over the Prime Minister's Office (PMO).

Raja also claimed that the former prime minister did not have any clue about the CBI raids with regard to the spectrum allocation.

"On October 22, 2009 (after CBI raided telecom ministry and offices of some telecom operators) I met the Prime Minister in his office in South Block at around 7.00 pm. T.K.A. Nair (the then principal secretary in the PMO) was also present. People will find it hard to believe that the PM was quite surprised when I told him about the CBI raids," he wrote.

In the book he termed the 2G Scam as a "shameful blemish on the sanctity of the administrative system of the country".

"It is my conviction consequent to the trial proceedings that there was political motivation to kill UPA 2 and Vinod Rai's was the shoulder on which the gun was placed," he wrote.

Last month, a special court had acquitted Raja and all other accused on charges of corruption and cheating in the sale of radiowave licences in 2008 that derailed the-then Manmohan Singh-led government.

While CAG put presumptive loss in allocation of spectrum at Rs 1.76 lakh crore, the scam had led to Supreme Court cancelling 122 licences sold to companies.

While there "hasn't been a shred of actual proof of corruption", his telecom policy had led to growth in teledensity and dramatic reduction in call charges, Raja wrote claiming he fought against telecom lobbies to draft a just spectrum auction policy.

Telecom lobbies were dead against giving licences to new players and just when the policy draft was in its final stages, a letter from the Prime Minister's Office was received, the content of which matched the business interests of the lobbies, he said.

"It is still a puzzle to me as to what could have prompted the PM to send that letter to me. With all due respect, I came of the opinion that such a letter bearing the PM's signature should never have been sent.

"It is just not expected for the PM to get into the nitty-gritty of the operational functions, procedures and guidelines of a ministry," he wrote. "This makes me wonder whether this letter was indeed drafted by the PMO."

He goes on to state, "It seemed he (Singh) had been led to believe that there was something amiss in the functioning of my ministry."

Slamming Rai, Raja wrote the former CAG behaved like "a cat that shuts its eyes and then declares the universe is dark".

"He (Rai) had to foist his personal (or influenced) agenda by sensationalising information and creating the appearance of procedural lapses and financial misappropriation. His presumptive loss figure of Rs 1.76 lakh crore has been subsequently debunked, but it became engraved in public memory and led to my tribulations," Raja wrote.

The CAG report, he said, was "essentially a mixture of inappropriate legal interpretations, incongruous comparisons and flippant allegations".

"Vinod Rai had the temerity to dub himself the 'Nation's Conscience Keeper' on the cover of his book titled 'Not just an Accountant' in which he dedicated a few chapters on the 2G spectrum allocation.

"He in his role as CAG was the 'sutradhaar' who created the devious apparition which the media and political opposition followed," he wrote.

Stating that a "conspiracy-nexus" cannot be ruled out, Rai's words and actions were "malicious vigilantism" and "disgraceful purchase of self-promotion".

Having written his book while the 2G trial was still going on, Raja demands that Rai "be called as a witness in the criminal case filed against me so that my defence has the opportunity to cross-examine and legally challenge him".

Raja claimed that Rai compiled his report with a motive of "riling up the public" and sensationalising the situation.

"It would perhaps have been in the public's better interest to investigate Rai's motivation to rush into this 'hunt' while almost blatantly ignoring the decisions and recommendations of TRAI, the Union Cabinet and the Telecom Commission! Even after TRAI's explanations refuted the views expressed in the CAG's report, Rai was not willing to correct his stand. It is ironic that such a person lays claim to the badge of 'Nation’s Conscience Keeper'," he added.