Could well be the third in the Munnabhai series. Leaves you with a smile and warmth that last long after the film is over. 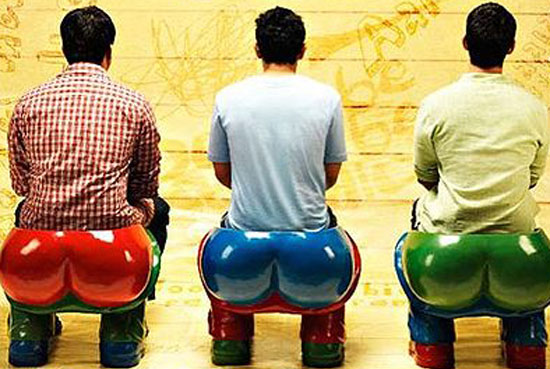 3 Idiots could well be the third in the Munnabhai series. The trinity of Aamir, Madhavan and Sharman as three engineering students, who don’t quite fit in the formalised education system, are like Munna and Circuit, telling the audience the essential truths of life with light-hearted banter and far-sighted innocence. The elaborate ragging sequences and the authoritarian portrait of Boman Irani as the principal of the engineering school are also a throwback to the Munnabhai formula. Moreover, Raju Hirani continues with the overly moral tone that defined his previous films. But it does say something of his surefootedness and craft that you still listen to him and enjoy the many lessons he teaches you.

He trains his guns at the education system this time--its stress on rote learning, marks and competition, on pursuing success than excellence, its inability to accept and integrate students who think differently, its tendency to force students to conform than become independent thinkers. Much of it is something that anyone who has gone through the mind-numbing, enervating rigour mill of IIT JEE, REC, PMT et al would identify with hugely.

What makes these moral pills so wonderfully sugar-coated is Hirani’s childlike sense of fun. The vignettes of college life are outrageously funny and there are some delightful throwaway moments like the scene in Shimla with a man taking pictures of a group of identical burqa-clad women with nothing distinguishing one from the other and the delicious reference to DDLJ, when the father allows his son to pursue wild life photography saying: “Jaa bete apni zindagi jee le." Also check out the way Hirani plays out the downbeat penury of a family in 50s sepia tones and a very upbeat, uptempo mode. It could be the single most hilarious Bollywood scene in recent times.

Aamir may have hogged the film’s marketing but doesn’t quite dominate the film. He is the pivot yet the more dramatic, audience pleasing moments go to the rest of the cast, especially the opera-obsessed, lisping Boman and the rag tag Sharman. The script does go loose and unreasonable (webcam and vacuum cleaner aided delivery scenes) in the second half, the tragic suicide scenes are played out too abruptly and the moralising too increases manifold. But the film leaves you with a smile and warmth that last long after the film is over. A wonderful note on which to end 2009.