While 15 people died in Hyderabad following incessant rainfall, which led to waterlogging on roads and inundation of some low-lying areas in the city, 10 people were killed in rain-related incidents across Andhra Pradesh in the last 48 hours. 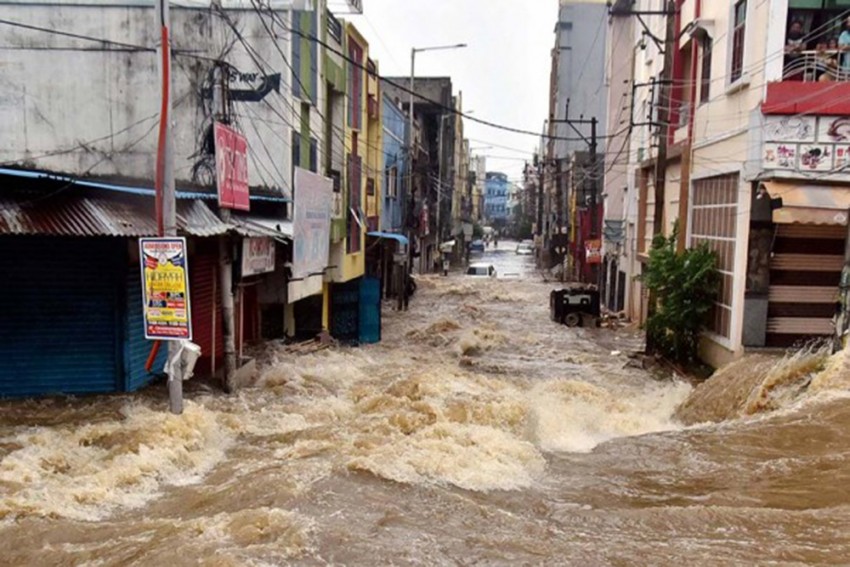 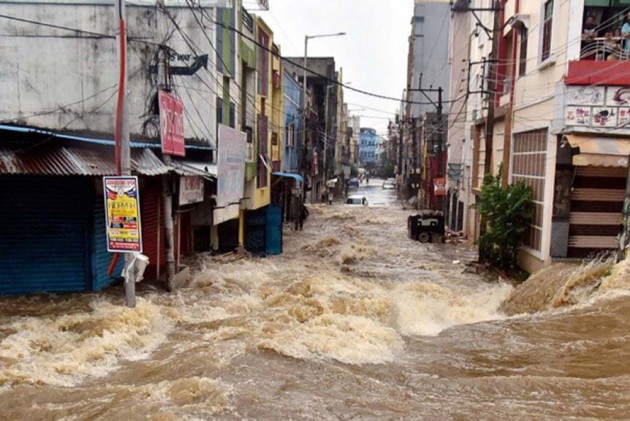 Twenty-five deaths in rain-related incidents were reported in Telangana and Andhra Pradesh on Wednesday and heavy downpour wreaked havoc in Karnataka as a deep depression in the Bay of Bengal crossed the coast in Kakinada, leaving behind a trail of destruction in the southern states.

Six more people, including four members of a family, were killed in a wall collapse triggered by heavy rains in Pandharpur town of Maharashtra's Solapur district during the day. While 15 people died in Hyderabad following incessant rainfall, which led to waterlogging on roads and inundation of some low-lying areas in the city, 10 people were killed in rain-related incidents across Andhra Pradesh in the last 48 hours.

Prime Minister Narendra Modi spoke to Telangana Chief Minister K Chandrashekar Rao and Andhra Pradesh Chief Minister Y S Jagan Mohan Reddy after the two southern states were hit by heavy rains and assured them of all possible support and assistance from the Centre in the rescue-and-relief work.

The deaths in Hyderabad were mostly caused by wall and house collapses triggered by the heavy downpour. The Telangana government had declared a holiday on Wednesday and Thursday for all private institutions, offices, non-essential services within Outer Ring Road here in view of the rains.

Meanwhile, a man in Hyderabad escaped from the jaws of death after being swept away by swirling flood waters in the rain-soaked city as he was dramatically rescued by police with the help of locals on Wednesday, with a video of the horrifying incident going viral.

People have been advised to stay indoors. Three members of a family, including a child, died in a house collapse in Gaganpahad area of Shamshabad. Ten people died in two wall collapse incidents in the Chandrayangutta police station limits.

A 40-year-old woman and her daughter died after the roof of their house fell on them in the Ibrahimpatnam area of the city on Tuesday night. Several localities in the Greater Hyderabad Municipal Corporation limits received very heavy to extremely heavy rainfall leading to waterlogging on several roads and low-lying areas.

Rivulets and other water bodies were in spate in Bhadradri-Kothagudem district in the state following heavy rains and the administration has advised people not to travel on or cross such rivulets and inundated roads. Several trees and electricity poles were uprooted due to the deluge. Power supply was suspended in most parts of the state capital on Tuesday as a precaution.

In Andhra Pradesh, heavy rains caused damage to roads and disrupted power supply at several places. For the second time in less than 20 days, river Krishna remained swollen on Wednesday as it received a heavy flood due to rainfall over the last couple of days.

A statement from the Chief Minister's Office said 10 people have died in rain-related incidents in the state in the last two days. The chief minister ordered that ex-gratia be immediately paid to the victims’ families. He asked officials to focus on restoration of power supply and repair damaged roads on a war-footing.

A breach occurred to the Sarada river bund near Yalamanchili in Visakhapatnam district, inundating over 2,000 acres of agricultural fields in the vicinity. The flood impact was felt in Chodavaram, Payakaraopeta, Yalamanchili and Anakapalli mandals in the district. The famous nurseries at Kadiyam near Rajamahendravaram were flooded due to downpour in East Godavari district. The Vamsadhara river in Srikakulam district received heavy flood under the impact of heavy rain in the catchment area in neighbouring Odisha.

In Karnataka, all major dams in the Cauvery and the Krishna basins are brimming and their floodgates were opened. Officials said Kalaburagi, Yadgir and Bidar were severely affected as small streams were in spate with many lakes overflowing and inundating villages.

The Army and the National Disaster Response Force (NDRF) have joined the rescue and relief work in many affected areas. Boats were deployed to evacuate people stranded in inundated areas while two helicopters have been kept on standby for rescue operations.

Union Home Minister Amit Shah on Wednesday said the Ministry of Home Affairs (MHA) is closely monitoring the situation in Telangana and Andhra Pradesh in the wake of heavy rains and the central government will provide all possible help to the two states.

"MHA is closely monitoring the situation in Telangana and Andhra Pradesh in the wake of heavy rainfalls. Modi government is committed to provide all possible assistance to the people of both the states in this hour of need. My thoughts and prayers are with those affected," Shah tweeted.

MHA is closely monitoring the situation in Telangana and Andhra Pradesh in the wake of heavy rainfalls. Modi government is committed to provide all possible assistance to the people of both the states in this hour of need. My thoughts and prayers are with those affected.

Meanwhile, the India Meteorological Department (IMD) said winter could be colder this season due to the prevailing La Nina conditions.

"As weak La Nina condition is prevailing, we can expect more cold this year. The El Nino and La Nina conditions play a dominant role if you consider the large scale factor for the occurrence of cold wave conditions," IMD Director General Mrutunjay Mohapatra said.
An IMD weather bulletin said heavy to very heavy rainfall with extremely heavy falls (>20 cm per day) at isolated places was very likely over Konkan and Goa and heavy to very heavy falls at isolated places over Coastal Karnataka and Madhya Maharashtra on October 15.

Fishermen have been advised not to venture into the sea over Gulf of Mannar, Comorin area and Southwest Bay of Bengal, along and off Karnataka-Kerala coats and north Andaman Sea during 14th-15th October, east-central and adjoining north-east Arabian Sea and along and off Maharashtra-south Gujarat coast during 14th-18th October, the department said.