Rescue and search operation for injured is underway. 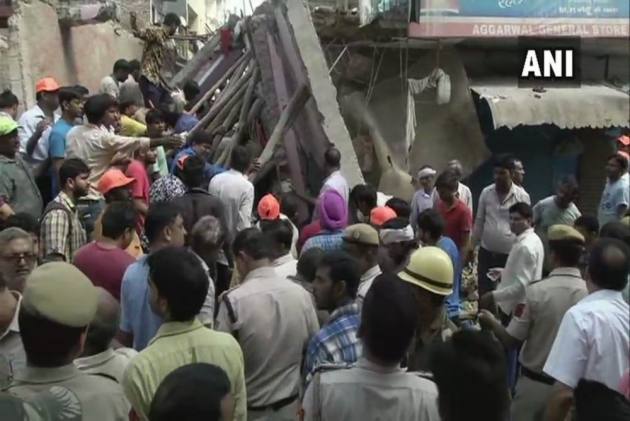 Four children and a woman were killed and at least seven injured after a four-storey building collapsed in northwest Delhi's Ashok Vihar Wednesday, police said.

The injured have been rushed to Deep Chand Bandhu Hospital where a woman's condition is stated to be critical.

The ground floor of the building housed a shop, which was closed while the first floor was vacant.

The fourth floor was inhabited by a couple -- Narottam and Nisha. Nisha is critical, the police said.

Some people are still feared trapped under the debris and rescue teams are working at the spot, the police said.

Vimlesh, who was present at the hospital and whose family members were injured in the collapse, said, "As soon as I left home and had barely walked a few metres, I heard a loud noise and when I turned back, I saw the building collapse like a pack of cards. I am waiting to hear about the condition of my family members. Two of my daughters had left home in the morning."

A call about the incident was received at 9.25 am and six fire tenders were rushed to the spot near Sawan Park, an officer said.

Two teams of the NDRF have been mobilised for rescue operations, a NDRF spokesperson said.

A senior North Delhi Municipal Corporation official said the building was about 20-years-old. Its structure was weak and in a deteriorated condition, the official added.