With the fresh cases, the state’s overall active coronavirus count jumped to 20,938, while the toll increased to 12,106, the bulletin said. The number of infections on Monday was less than 5022 cases reported in the state on Sunday, the bulletin said. 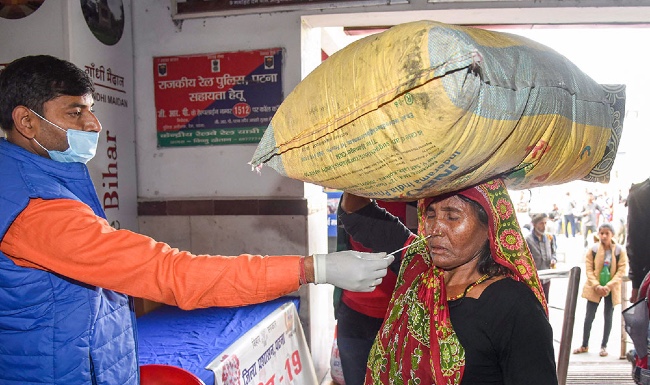 Bihar on Monday reported 4,737 fresh coronavirus infections and five deaths, including that of a six-year-old girl, a bulletin issued by the state health department said.

Patna recorded all time high of 2566 COVID-19 cases on Monday. On Sunday, the state capital had logged 2,018 cases, it said. Bihar government began administering the booster dose of COVID-19 vaccine to vulnerable groups such as healthcare and frontline workers and the elderly people.

The state's overall caseload on Sunday stood at 7,50,137, the bulletin said. All the five deaths reported on Monday took place in the city - three in AIIMS, Patna and one each in PMCH and IGIMS. The six-year-old girl died at AIIMS, Patna where she was admitted for treatment and tested positive for coronavirus on Saturday. She died on Sunday, a health department official said. A 50-year-old person, who underwent a kidney operation at AIIMS, Patna too tested positive and died on Sunday as did a 72-year-old cancer patient, the official said.

The state has so far accounted for one confirmed case of the Omicron variant. The official said 691 persons recovered from the pandemic in the past 24 hours, a marginal decline to 95.59 per cent pushing the total number of recoveries to 71,70,92. The recovery rate on Sunday was 96.11 per cent.

The number of active cases is 1,119 in Gaya, followed by 956 in Muzaffarpur, 602 in Begusarai and 471 in Saran. The positivity rate on Monday was 3.13 per cent, up from less than two per cent till Saturday, the official said. Altogether 6.25 crore samples have been tested so far, including 1.51 lakh in the last 24 hours, he added.