For starters, the Jimny’s breakover and departure angles are better than top off-roaders in the world like the Jeep Wrangler and the Mercedes-Benz G-Class 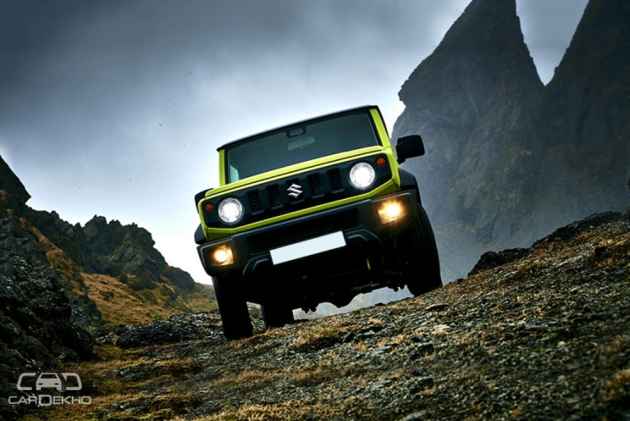 In its 48 years of existence, the Suzuki Jimny has created its own legacy among leading go-anywhere vehicles around the world. Suzuki recently revealed the fourth-gen model and it will be on sale in various markets by early 2019. While Suzuki didn't launch the third-gen Jimny in India, the fourth-gen model is expected to make it to the country next year! Here are five things that make the Jimny a true-blue off-roader:

The fourth-gen Jimny inherits some design elements from the Gypsy (second-gen Jimny) and even the first-gen model. Both these generations followed a boxy design theme, which looked more rugged compared to the third-gen model. 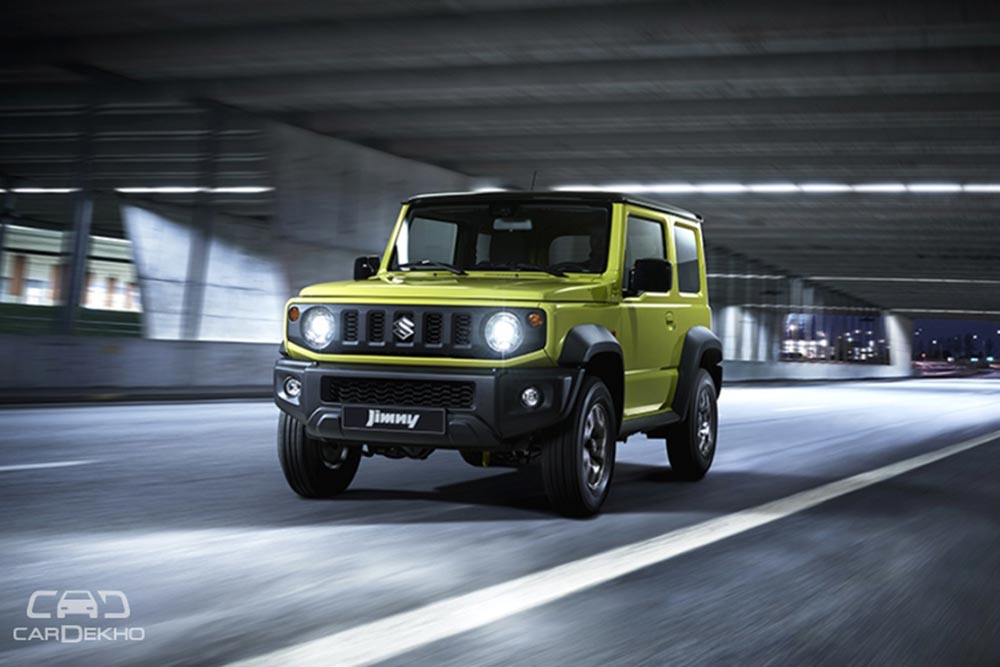 The Jimny gets an almost vertical windshield and a clamshell-type flat hood, a setup that maximises the visibility both on and off-road. In order to give a better view of the SUV’s surroundings from inside the cabin, the front windows feature a kink that allows for a larger glass area. The outside rearview mirror on the opposite side of the steering wheel also gets multi-view mirrors, which are a boon while off-roading. 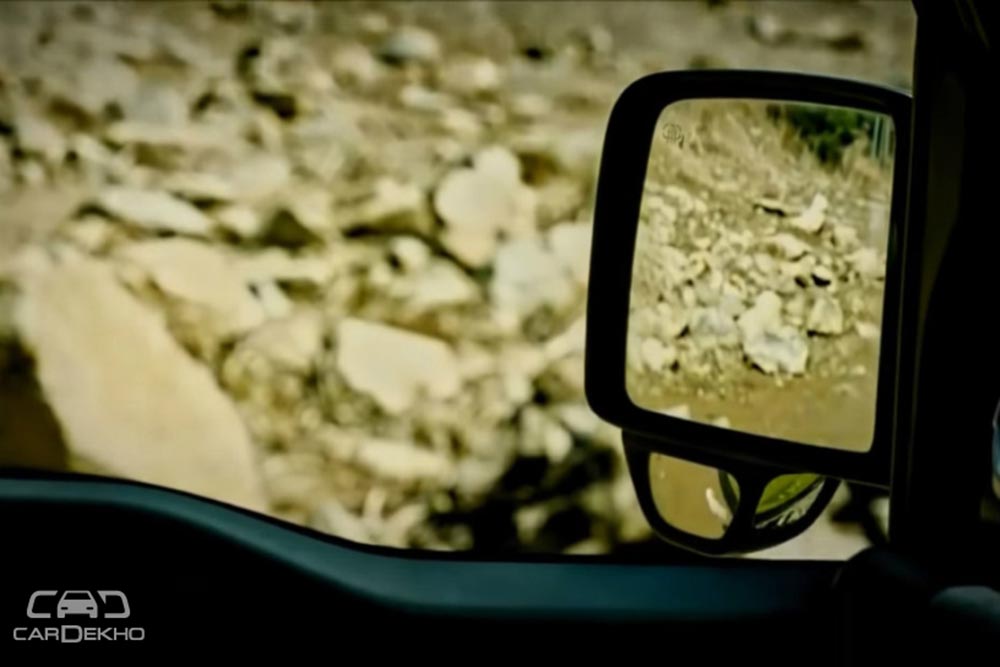 Like the new-gen G-Class and the Jeep Wrangler, the Jimny too has retained old-school drainage chutes on the perimeter of the roof (not offered on the previous-gen). Since these off-roaders are subjected to extreme weather conditions, these chutes help to safely drain the water that accumulates on the roof without drenching the driver and passenger when they open the door. 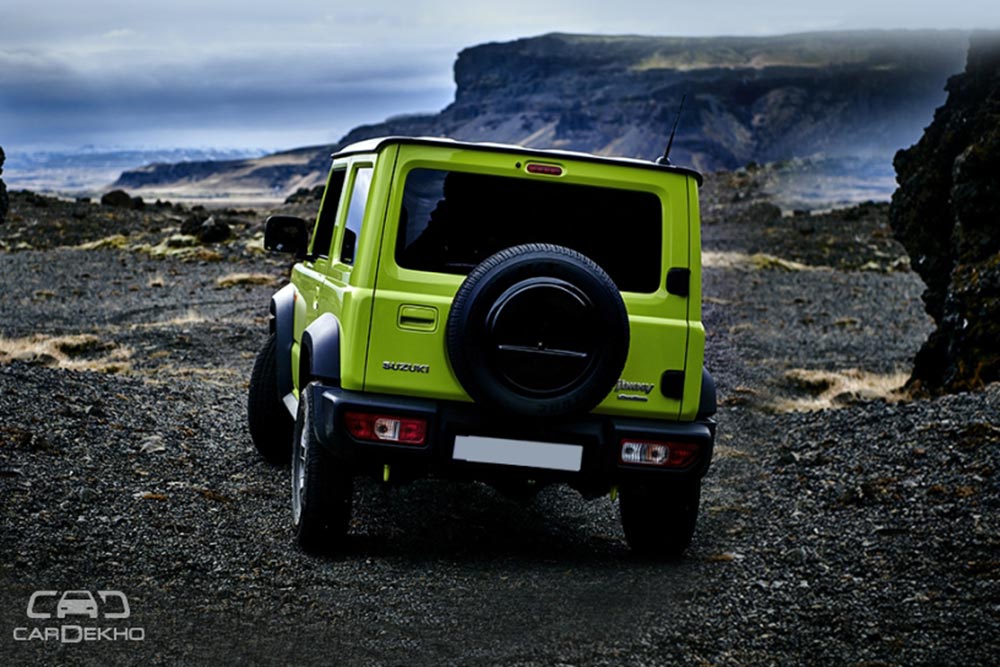 The tail lamps in the fourth-gen Jimny are placed on the rear bumper like you see on the Gypsy. So, with the placement of rear lights on the bumper, the designers had the liberty to maximise the tailgate's opening, which in turn helps while loading equipment like camping gear. Even the square-ish luggage area, which can be expanded to up 830 litres, is designed to offer maximum luggage carrying capacity. 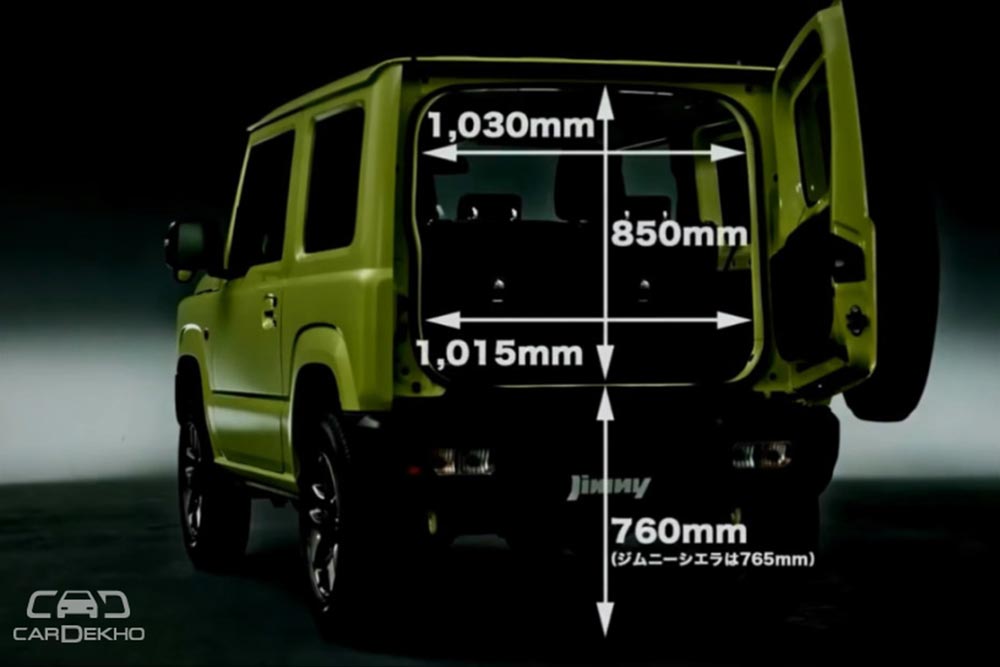 It is pretty clear that the humble Jimny is a tough off-roader with unmatched breakover and departure angles compared to world’s leading off-roaders and the Mahindra Thar, which is sold in India. Even the approach angle of the Jimny is pretty respectable and better than the Mercedes-Benz G-Class. 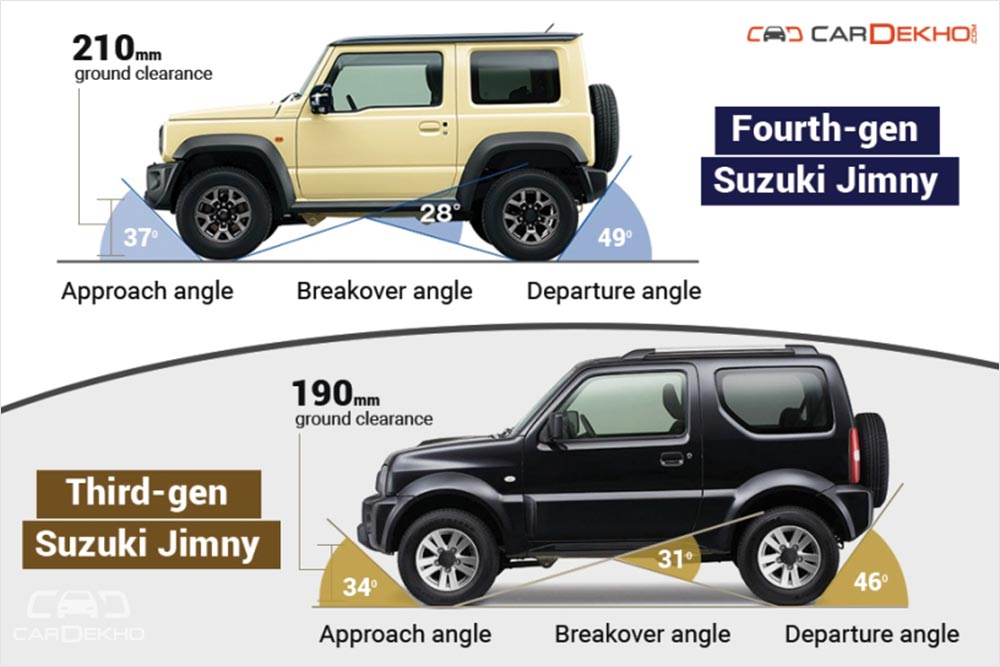 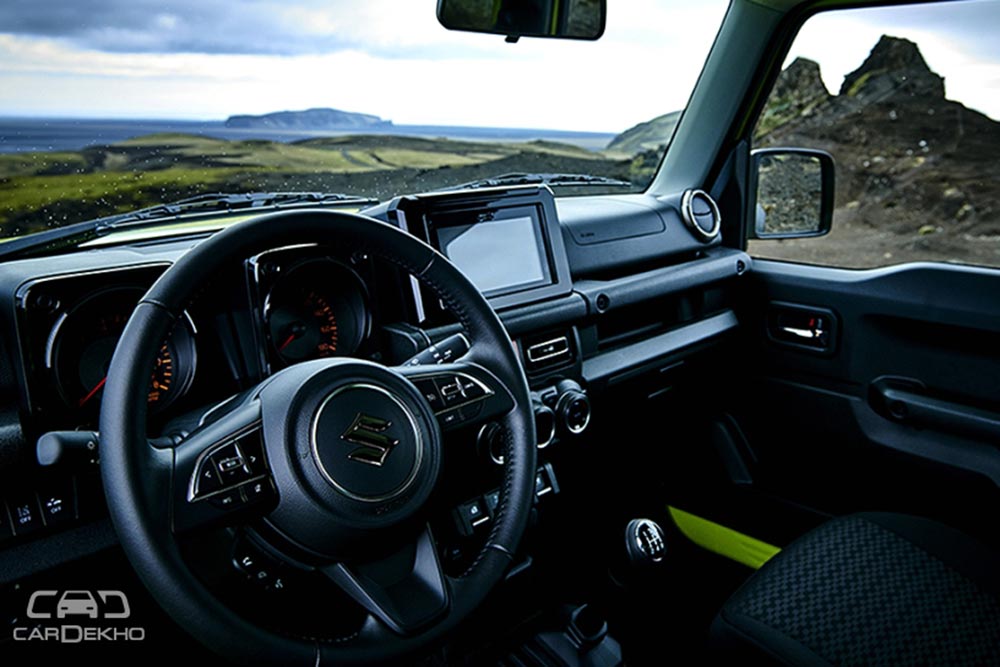 The Jimny comes with a purpose-built minimalist interior. The dashboard features a horizontal layout and the centre console is nearly vertical, which ensures that the driver sits closer to the windshield for better visibility of the terrain ahead. The dash and the surrounding parts are made up of scratch- and stain-resistant plastic. At the back of the rear seat there’s a hard plastic cover, which is easier to clean. There are five hooks on the rear window and four more behind the rear seat. Together, they help in locking the luggage up securely while off-roading. The toggle switches and various switchgear may look simple, but are designed to be used in various conditions, even with the gloves on! 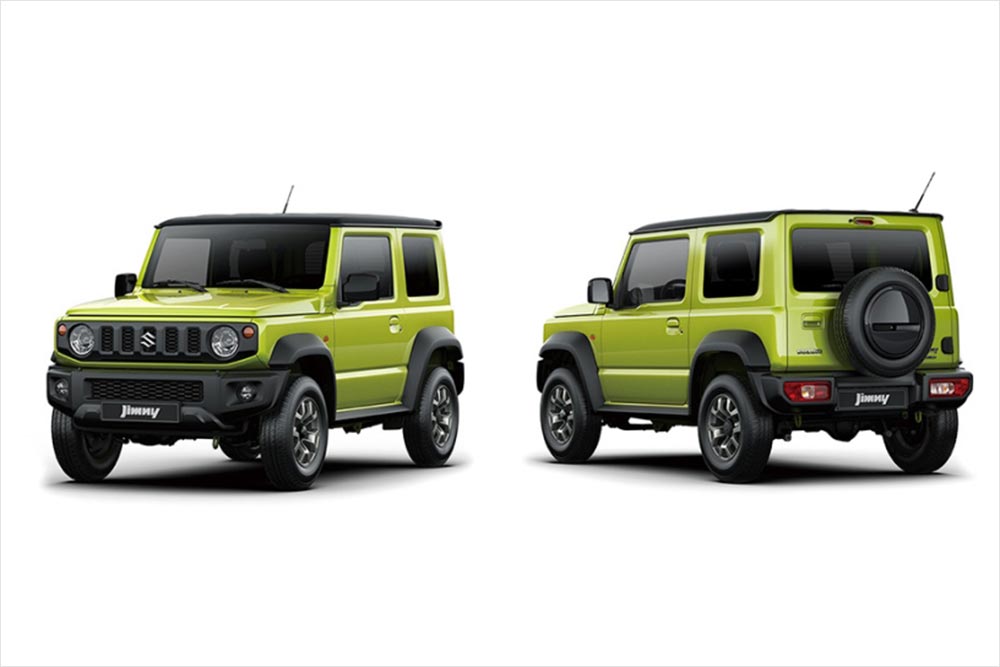 The Jimny gets some really crazy colour schemes, including contrasting roof options for the first time. While these colour options do make it pop out in the urban jungle, Suzuki says they have been offered on purpose. The Kinetic Yellow, for instance, allows the teeny tiny Jimny to stand out in bad weather conditions like dense fog or other similarly harsh off-road conditions. In fact, Suzuki also says that the Jungle Green colour makes the Jimny a chameleon in the jungle, helping it merge with the surroundings better. Well, we'd reserve our judgement on that till we get our hands on one. 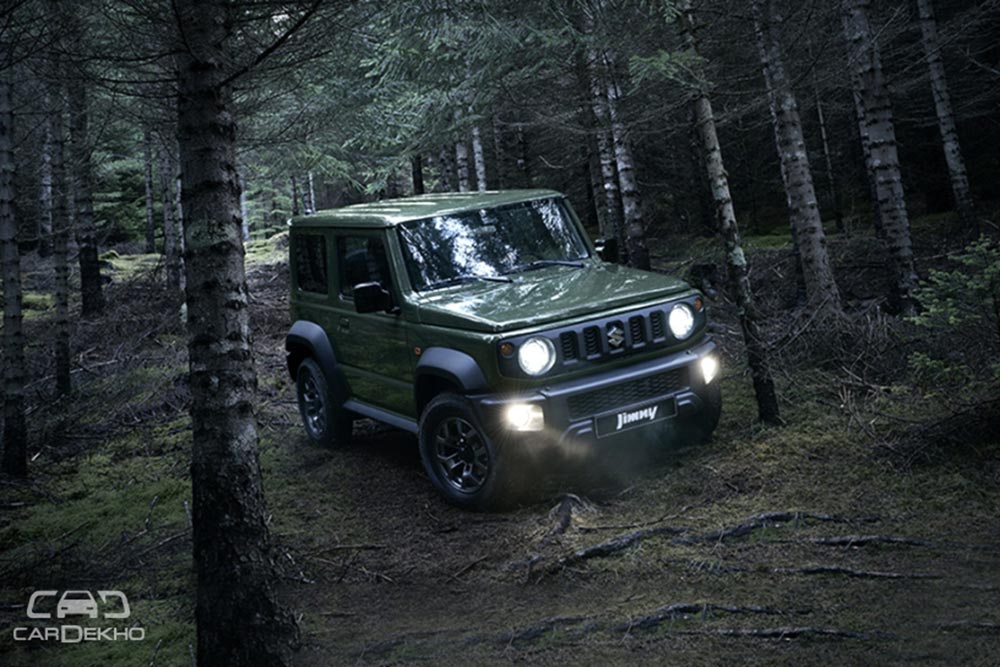 The biggest strength of the Jimny is its lightweight, yet rugged body-on-frame construction since in off-road conditions, weight plays a crucial role. Take the Mahindra Thar, for instance. The Thar (soft-top) tips the scales at a whopping 1,670kg, while the fully-loaded Jimny, which only comes in a proper hard-top version, has a kerb weight of 1,135kg. Hence, the Jimny has to carry 535kg less while off-roading, compared to the Thar. That roughly equates to the combined weight of seven to eight adults! 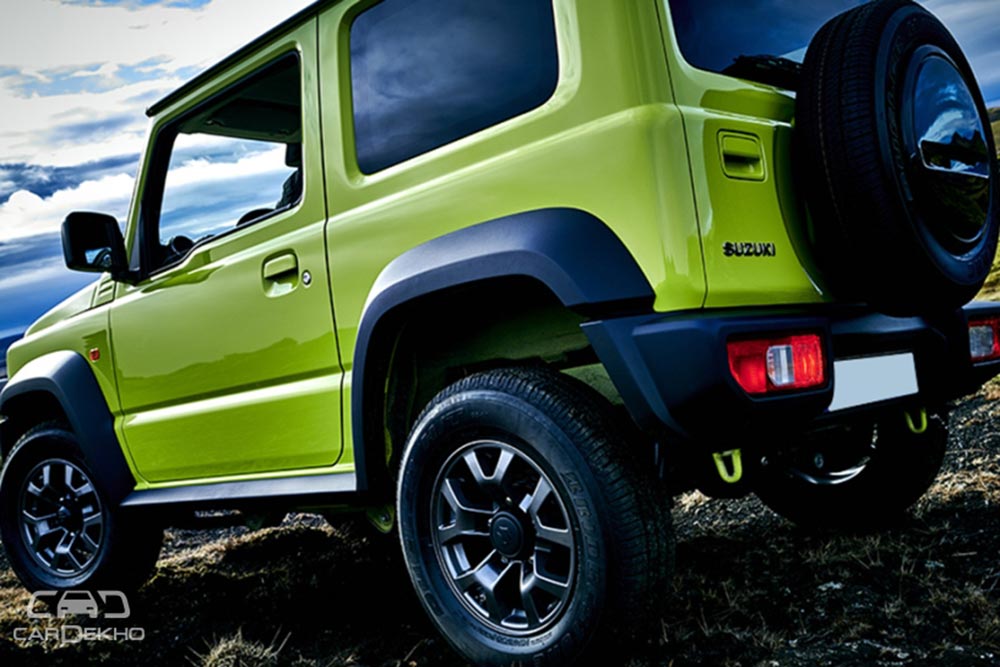 We feel that Jimny has everything to become the next ‘mountain goat’ in India replacing the old workhorse, the Gypsy. Suzuki proudly says, “There are places in the world only the Jimny can go.” Don’t you want the Jimny to conquer world’s highest motorable road, the Khardung La pass? We certainly do.