The SIT, probing the murder, said it arrested alleged gunrunner KT Naveen Kumar, who was taken into police custody on March 2 for interrogation in connection with the case. 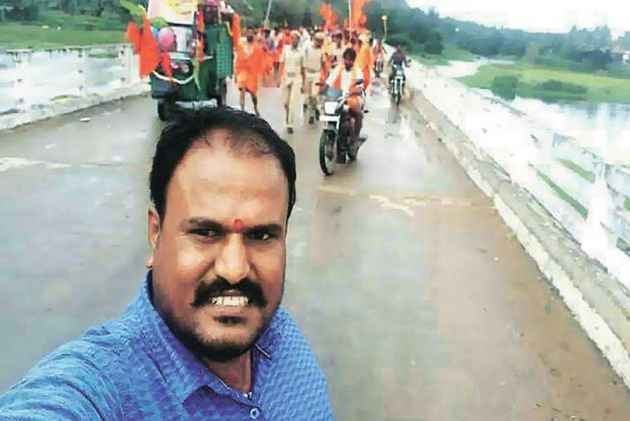 Six months after the murder of journalist Gauri Lankesh, Karnataka police on Friday arrested a man said to be linked with a right-wing radical group for his suspected involvement in the sensational killing.

The Special Investigation Team, probing the murder, said it arrested alleged gunrunner K T Naveen Kumar, who was taken into police custody on March 2 for interrogation in connection with the case.

This is the first arrest in the case after the 55-year old Lankesh, known as an anti-establishment voice with strident anti-right wing views, was shot dead at close range by unknown assailants at her home here on September 5 last year.

"He (Naveen Kumar) has been arrested. He is an accused (in the case)," Deputy Commissioner of Police M N Anucheth, the investigating officer in the case, told PTI here.

Police said Kumar, in his 30s, was suspected to be linked with a fringe right-wing radical group.

Initially, he was arrested on February 19 on charges of illegally possessing five bullets.

A case under the Arms Act was then registered against him and he was remanded to judicial custody by a court.

Subsequently after interrogation, he was taken into eight-days custody by the SIT for suspected links in the Lankesh murder case.

The arrest comes two days after state Home Minister  Ramalinga Reddy said the SIT would soon clear the air whether the police have picked up the right person in the case.     Kumar's family has maintained that he was innocent and in no way connected to the case.

The state government, which constituted the SIT headed by Inspector General of Police (Intelligence) B K Singh, had  announced Rs 10 lakh reward for anyone giving clues about the  perpetrators of the crime.

The killing of the journalist had drawn widespread condemnation and the Siddaramaiah government had come under flak for not making any headway in nabbing the culprits.