At least two persons died and one went missing after a private boat with 92 passengers on board capsized following a head-on collision with a government-owned ferry near Nimati Ghat in Jorhat district on September 8. 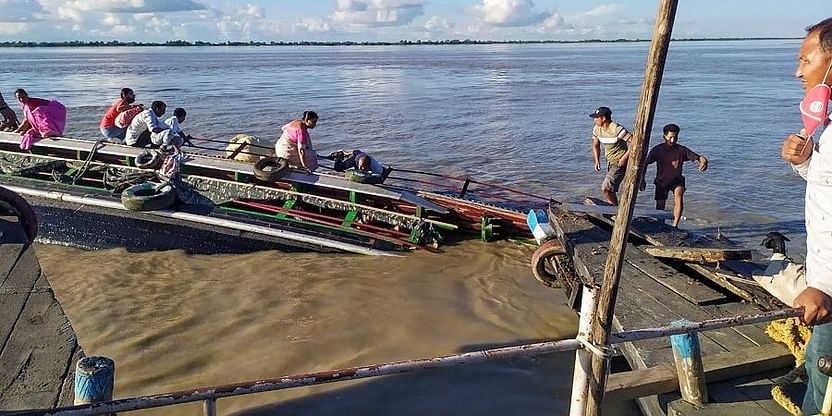 Police confirmed arrest of at least six employees of Assam's Inland Water Transport (IWT) Department in connection to their allegedly committed mistakes that led to a boat capsize in the Brahmaputra and caused death of two persons while one went missing.

According to police, the IWT employees are charged with culpable homicide not amounting to murder.

The unfortunate accident claimed lives of two people and one went missing after a private boat carrying  92 passengers on board capsized following a head-on collision with a government-owned ferry near Nimati Ghat in Jorhat district on September 8.

Three people working in the private boat were picked up for questioning, while several officials were summoned for recording their statements, Jorhat Superintendent of Police Ankur Jain said.

"We have arrested six IWT staffers from Nimati Ghat after finding out that they had committed mistakes as they did not follow the procedures. The accident could have been avoided," Jain said.

The police have registered a case under Section 304 (culpable homicide not amounting to murder) read with Section 34 (criminal act done by several persons for the common intention of all) of the Indian Penal Code, and all the accused have been charged with these provisions, he added.

"Three persons working in the private boat at Kamalabari in Majuli district were also picked up for questioning. We are coordinating with Majuli Police and a team from Jorhat will reach there," Jain said.

Asked whether any IWT officer has been taken into custody, Jain replied in negative but said that many officials posted at Nimati Ghat were called for questioning for recording their statements.

"Presently, we are trying to reconstruct the scenario and find out how the accident took place," the SP said without sharing further details.

The collision took place when private boat 'Ma Kamala' was heading towards Majuli from Nimati Ghat with passengers and vehicles, while government ferry 'MB Tipkai' was coming from the world's largest river island.

Visiting the accident spot the next day, Chief Minister Himanta Biswa Sarma said that in the initial probe, "mismanagement" was found to be the prime reason for the accident.

He was identified as Bikramjit Barua, a doctor hailing from Jorhat who was posted in Majuli. The deceased were Parimita Das, a college teacher from Guwahati, and Indreswar Bora, a school teacher from Lakhimpur.