The floods triggered by heavy rain under the impact of a depression in the Bay of Bengal left a trail of destruction, claiming 34 lives while another 10 people were missing. According to the preliminary reports from the flood affected districts, the crop loss is estimated to be around Rs 3,000 crore. 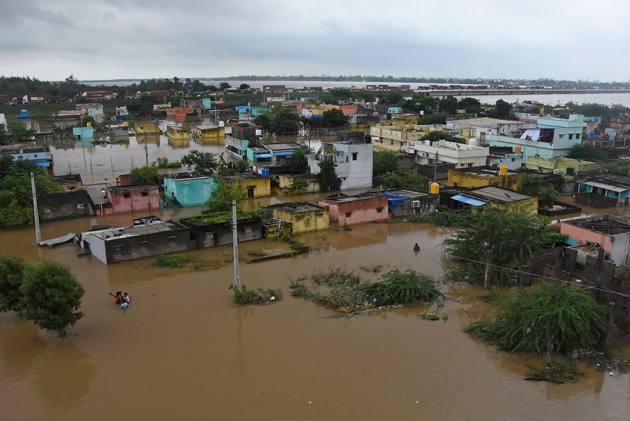 Agriculture Minister K. Kannababu said a detailed crop enumeration will be done once the floods recede.The district-wise breakup of crop loss was yet to be updated but as per the district-wise information available as on November 21, Kadapa district suffered the maximum. Crops over 1,26,167 hectares were damaged in Kadapa, followed by 90,498 hectares in Anantapur. Nellore and Chittoor districts had suffered crops damage over 12,118 hectares and 9,616 hectares respectively. Kadapa district also recorded damage to horticulture crops over 17,912 hectares. In Anantapur and Nellore districts, the extent of horticulture crops damaged were 616 and 101 hectares respectively.

Agriculture department officials said crops were washed away due to breaches in the bunds of irrigation projects like the Annamaya project and the Cheyyer reservoir in Kadapa district. Paddy, sunflower, black gram and cotton crops suffered the maximum damage. The affected farmers said that floods destroyed the crops which were ready for harvesting. They have appealed to the government to come to their rescue. The dairy industry also suffered a huge blow as hundreds of cattle were washed away. The state government announced that financial assistance of Rs 30,000 will be provided to the farmers in case of the death of a buffalo or a cow and Rs 3,000 in case of a sheep or a goat.

Over 1,300 villages were inundated due to the floods, the worst in recent years. The deluge caused widespread damage to the infrastructure and snapped vital road and rail links in the region. The state government has announced Rs 5 lakh compensation to the family of each deceased.

Eight teams of the National Disaster Response Force (NDRF) and as many of the State Disaster Response Force (SDRF) were deployed for rescue and relief operations. Two helicopters were used for rescue operations in 19 places. The authorities opened 294 relief camps in the flood-affected areas. About 58,000 people were evacuated from the affected areas and shifted to relief camps.

The temple town of Tirupati in Chittoor district was the worst hit by the rain and floods. The ghat roads and walkways to the famous Sri Venkateswara temple atop Tirumala suffered huge damage. Even four days after the rains, several low-lying areas in Tirupati and its suburbs remained inundated. A similar situation prevailed in several parts of Chittoor and Nellore districts. The authorities were air-dropping essential commodities in the marooned villages of Chittoor district on Tuesday.

The Chief Minister has directed officials to step up the relief work. He asked them to provide a compensation of Rs 95,100 and sanction a new house to those who lost their homes and Rs 5,200 to those whose houses are partially damaged due to floods. He said the state government has sanctioned an additional Rs 10 crore each to Kurnool, Chittoor, Anantapur and Kadapa districts totalling to Rs 40 crore for relief measures.

The heavy rain and floods led to breaches in several lakes and tanks, adding to the people's woes. The natural calamity caused extensive damage to the irrigation system, electricity poles, towers and transmission system and roads. State, district and rural roads to a total length of about 2,000 km were damaged. As per the initial estimates of the Roads and Buildings department, Rs 800 crore is required for repair of the damaged roads and bridges.

The Chief Minister has directed the officials of Panchayat Raj and Municipal Administration Departments to finalise the tenders for permanent restoration work in the next four weeks. Meanwhile, leader of opposition and Telugu Desam Party (TDP) president N. Chandrababu Naidu on Tuesday visited the flood-affected areas in Kadapa district. The former Chief Minister visited a few villages in Rajampet and Nandluru mandals and interacted with the affected people.