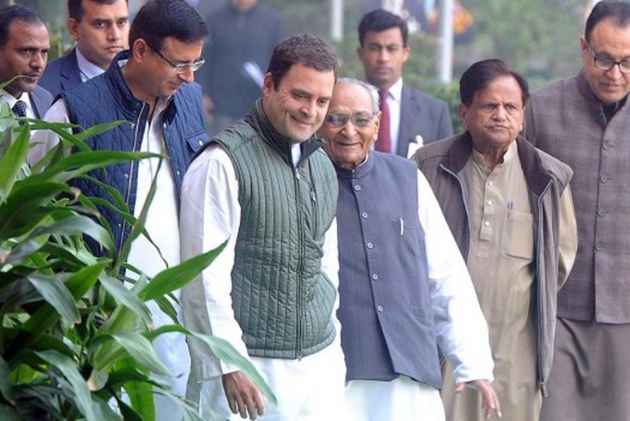 The 84th Congress plenary has begun in New Delhi today, the first under Rahul Gandhi as the party president.

The two-day meeting will focus on workers as part of the leader's bid to strengthen 'The Grand Old Party organisationally'.

The meeting is being attended by the party's top leaders, including former prime minister Manmohan Singh and former party chief Sonia Gandhi, its mandarins from across the country and workers. The party is hoping that around 15,000 party members will attend the two-day open session, beginning today.

Party sources said the party would adopt four resolutions on political situation, economic front, foreign affairs, and agriculture, unemployment and poverty alleviation. The party will highlight its vision on each sphere and compare it with the current situation.

The session will end with an address of the Congress president, where he would set the tone for the party's plan forward for the upcoming elections.

The political resolution, the sources say, will also indicate the party's plans for forging coalitions with like-minded parties.

The Congress is seeking to build a larger front of opposition parties to stop the BJP from coming back to power.

Former party president Sonia Gandhi has called upon them to set aside their differences to come together for a larger national cause.

"This plenary session will be very different from other sessions this time as the Congress president is seeking to accord preference to workers than leaders," a leader said, adding the focus would be shifted from the Congress chief to workers who will be allowed to speak up on the party's future strategy.

There was no confirmation on whether the Congress Working Committee would be formed during the session or after, but the sources said it would not be an elected body and the party chief will select his own team.

Gandhi, who took over the reins of the party in December last year, will present the Congress vision document and the political road map for the party and the document will act as a "guiding light" to help party workers upstage the BJP from power at the Centre in 2019, besides in some states.

The session will also look into future alliances that the party foresees will be needed for defeating the BJP, a Congress leader said.

Here is the live update:

* "This is the only symbol (Congress party symbol) that can unite the nation and take it forward," says Rahul Gandhi

* "They (BJP) use anger, we use love, but one thing that I want to say is that this country belongs to everyone & whatever Congress will do will be for the benefit for all," he says.