The President of International Fund for Agricultural Development stresses that access to funds for developing countries will help them make ethical decisions in the quest for food security. 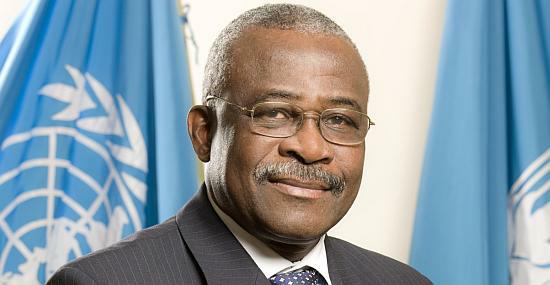 Just days before the UN Climate Change summit at Copenhagen, Kanayo Nwanze, President of IFAD (International Fund for Agricultural Development), stresses that access to funds for developing countries will help them make ethical decisions in the quest for food security. Nwanze was recently in India. Excerpts from an interview

In  2007 and 2008, several countries witnessed food crisis and even riots over food shortage. What are the learnings from these experiences?

I believe the multiple factors that resulted in the food crisis in 2007 and 2008 were wake up calls to national governments in the developing world and in the international community. This is clearly demonstrated by the response and reaction since then, culminating in the G8 summit holding a special session on food security for the first time ever and subsequently in the G20 summit at Pittsburgh and the World Food Summit in Rome. These clearly indicate that we have at least woken up to the reality of the importance of food security and people having enough food all over the world. The response demonstrates that the international community now realizes the centrality of agriculture. Whether we have learnt our lesson is another issue but at least we have woken up to the reality.

In spite of all the efforts there are many commodities whose prices are still higher than they were prior to 2007, so essentially not all countries have been able to take advantage of the food price hike. Along with hike in food prices there has been increase in cost of transportation and fuel. For the developing world, the commodity prices have been low so you have had fewer exports. Then there have also been extreme climate situations like in Bangladesh, India and the Horn of Africa. The financial crisis has also made things much worse, particularly for smallholdings farmers due to capital reversal, rise in borrowing rates, a collapsing global trade and commodity prices, a reduction in subsidies in some countries...

In the recent years we have seen a steep rise in prices of food commodities particularly whenever India enters the global market to import food grains. Do you see the days of high commodity prices persisting?

We have to understand that given the uncertainties in the financial markets anything can happen. It is not even possible to make projections six months down the road. India certainly has a very vibrant market -- not because of the population but due to the increasing proportion of middle-income population whose demand for better and high quality food products is rising.  So there is going to be increased pressure arising from India. Once India enters the global market it is going to create increased pressure on prices.

As I have said one must applaud Indian government for the transformation in the last few decades not just in economy but also technology and agriculture. I believe we are now at a crossroads and need to re-look at the policies that brought us to this point and see if there are possibilities of our becoming highly import dependent...

Won’t the rising food prices make it more difficult to meet the target for halving world poverty and hunger?

Not just rising prices, the impact of climate change is going to make it very difficult for us to meet the targets of Millennium Development Goal (MDG), particularly the first one of halving world poverty by 2015. But there are countries that will be able to meet the MDG-1 objective. China certainly may be able to meet the target. India has also not done too badly but there have been reversals due to extreme weather situations.

What are the reform measures that need to be introduced urgently to improve food security in countries like India?

Certainly India has made big strides. I remember in the 1970s, India was being described as a hopeless case.  At that time India had severe food crisis, drought and famine. At that time there was no African country that was a net importer of food. But even before the 1990s, India had begun to export food. Today India is a powerhouse in the Asian sub continent. While many African countries have become net importers of food, India has made some progress. Now India faces new challenges of population growth and impact of climate change.

I have always believed that when we talk about agriculture development we should not limit ourselves to large industrialisation. The majority of farmers live in rural areas where the primary occupation is farming. We must invest in rural development and rural opportunities. About two thirds of India's one billion population lives in rural areas. Over 150 million of them are poor. Poverty is deepest among the scheduled caste and tribals. So you must invest in rural development, in financial inclusion, in building infrastructure, in primary education, capacity building -- a whole government approach.

How is IFAD proposing to help developing countries combat the climate challenge to improve agriculture productivity?

Clearly climate change is translating into decline in food production. We are worried as it is going to make it difficult to combat hunger -- what with price volatility and market dependence and, of course, conflicts.

Basically IFAD believes in helping farmers, particularly rural community to adapt to climate change with access to cutting edge crop technology, micro-finance services and weather insurance and helping them have access to markets. In India, IFAD also works with tribals, particularly in regional areas. India has the largest country programme of IFAD. Over the past 30 years, we have invested over $636 million in India in about 23 projects.

IFAD will remain the voice of the poor and the rural communities at discussions on climate change. I also believe providing access to financial assistance for developing countries, particularly India, which has been making great strides in these areas, will help them to make cautious and ethical decisions, and to be able to influence decisions when climate change discussions take place at the Copenhagen summit.

How is the global community gearing up to meet the food challenge and supplement efforts of developing countries to improve both agriculture output and rural incomes?

The international community has demonstrated its commitment by committing $20 billion (at the G8 summit at L’Aquila in Italy in July) for development of agriculture with focus on small landholders and women. We here in Rome -- the FAO and IFAD -- believe that our joint efforts through investments in agriculture in developing countries over the last few decades are certainly geared to helping them produce their own food.

The language that I have been hearing for the last several months is that all these programmes should be country-owned and country-led, and that international community must help developing countries to produce their own food. This is clearly a shift from food aid to sustainable agriculture production through long-term investment. This shift in language is a clear recognition of the linkage of food security with national security and political stability.

Is globalisation proving beneficial or posing a threat to efforts by developing countries to improve food security?

I don't think there is a simple yes or no answer. It depends on the context. Globalisation in many ways helps if it has the right environment for access to new technology, new products, new commodities and to knowledge. At the same time, it has its downside as globalisation works on competition. When you are competing on equal footing than somebody flourishes.

Globalisation means the developed countries should remove barriers to allow developing countries to be able compete. It also means that developing countries should be able to achieve a level of qualitative products that are able to compete in the international markets. So there are good side and downside to the whole controversy over globalisation.  It creates opportunities for forging new global partnerships in all areas.

How serious is the problem of ‘land grab’ by overseas investors in agriculture? How is it affecting the host countries?

I would first like to say that the expression 'land grab' is a misrepresentation of facts. I would look at it more as a foreign investment into agriculture. From my knowledge I can say this practice is not new as it was been happening for decades with either sovereign nations or companies investing in agriculture in other countries.

There are many successful experiences in some parts of Africa -- tea plantations in Kenya and eastern Africa or cocoa in Western Africa or rubber in Liberia, for instance. Though owned mostly by foreign investments, they have been very good in bringing new technology and improving local lifestyles through  infrastructure, schools,  hospitals and healthcare. In many cases they are a source of income for the host government by creating export pathway.

What is happening in some cases is that companies are taking advantage of poorly negotiated terms or poor policy guidelines to exploit some of the developing countries. We together with the FAO and the World Bank are framing policy guidelines to ensure that these countries have the necessary framework to protect them against exploitation by foreign investments. As I see it, this can be a compliment to efforts to enhance food security globally…

When will the international code on farmland deals be ready, and what will its focus be?

We are aiming to have it ready by February 2010. In many ways it will follow the same pathway as the Kimberley framework for mining. At the end of the day, we hope it will help the international community play a vital role in developing an international code for investment in agriculture, which will provide both the developing countries and the investing countries or institution a win-win situation.

The local communities must not be deprived of their land or the benefits from investments in it - either for creating employment or infrastructure. We must ensure that a country that is not able to feed itself does not sell off land to produce food for exports when it is asking for food aid.