A Day Spent With An 'Anti-National' Indian

Despite her battle with GOI and trial by the media, Greenpeace activist Priya Pillai remains defiant. 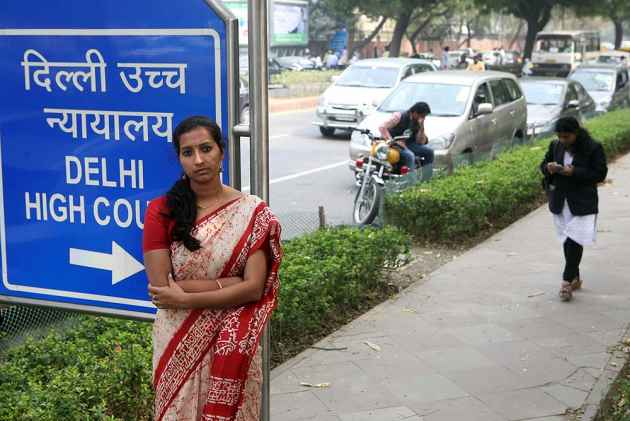 It's 10:40 am. On the empty, gray terrace of Greenpeace India's office in Gautam Nagar, a stone's throw away from the All India Institute of Medical Sciences (AIIMS), Greenpeace activist Priya Pillai pulls out two chairs and sits down facing me. In the next one hour, as we try to talk, we would be interrupted by nearly a dozen phone calls. Surprisingly, not one is about the court hearing, that is to begin in a few hours, to decide whether she is anti-national, or on the contrary, protecting public interest by fighting for rights of tribals in Mahan, Madhya Pradesh and against a 'British' firm.

The calls, majority of them, are from her family. "We have done all we could for acchan (father). Now we are only torturing him amma. How much longer can he survive on ventilator support?" she asks in Malayalam. After a brief silence, supposedly to make allowance to her mother's protests, she continues resolutely, "He's surviving because of a machine. They are medically managing his life and only pushing it for a few days while torturing him. Do you really want to see him alive like this? We cannot continue to do this to him." This seems to have convinced her mother, who hangs up soon after Pillai promises to get back to Kerala soon, after the signing of the counter-affidavit responding to the Ministry of Home Affairs's reasons for not allowing her to board a flight to London by Indian immigration.

Almost immediately, as if nothing serious had interrupted the conversation, she apologises and picks up from where we left – discussing the inconsistencies in the affidavit filed by the Ministry of Home Affairs, justifying the curbing of her freedom of movement, speech and expression. "The government says I was going to London to talk about how India is robbing tribals of its rights. This is entirely untrue," she says. "I was going to London to informally interact with MPs, which I have done several times before, to intimate them about human rights violations by Essar Power, a company registered in their country, on tribals in Madhya Pradesh. Is this being anti-national? Why is this government trying so hard to protect corporate bodies like Essar?"

Denying that she was going to 'depose' before a formal parliamentary standing committee, she argues, "I know what it is to 'depose' before a parliament. I have deposed before committees on Environment and Forests on the Nuclear Liability Bill. I have spoken in the FAO headquarters in Rome about the adverse impact of bio-fuels on farmers. However, this is the first time that I am encountering such an unreasonable reaction."

The Ministry of Home Affairs, in its affidavit before the High Court, has claimed that Pillai's deposition would have a direct bearing on the Foreign Direct Investment that the country is trying to attract and that it will attract sanctions in trade. However, Pillai argues that individual MPs have 'official status' in the British parliament. The unofficial status of the All Party Parliamentary Groups (APPG) before which they claim she was going to 'despose' can even be checked in the official website of the British Parliament. While there is an army of well-qualified diplomats being in place to serve the foreign policy interests of the country, "curbing individual freedom to this extent is being done to threaten and intimidate citizens who have dissenting views, much like in a totalitarian regime."

While the affidavit holds that she could take recourse to institutions of justice within the country, as other activists have, instead of approaching a foreign body, Pillai explains that Greenpeace has repeatedly, over the past four and a half years, raised the issues with various Indian MPs, approached all tiers of local administration in Mahan, the Ministry of Tribal Affairs and Environment and the National Human Rights Commission.

They have also filed cases in the High Court in Madhya Pradesh, the National Green Tribunal and in the local court in Waidhan, regarding the issue of clearance for the mining project being obtained deceitfully by Essar by forging signatures of over a thousand villagers. Greenpeace has also obtained evidence to prove that at least six of those whose signatures were forged were not alive then, even as two were in jail. Yet, despite approaching several institutions, and even after the Jabalpur court order that an FIR be lodged, the SP in Mahan has refused to do so till date.

Even as she continues talking passionately, one of her colleagues walks in to remind her about an official meeting, which has already begun. "I'm very sorry, but I am racing against time. Can you wait for just a few minutes so that I finish this meeting and we can talk on the way to the court?" she asks.

Waiting for her to return from the meeting, I learn that Pillai had flown only the previous morning to be present in the court hearing, after spending a month with her 75-year-old father, whose condition had become extremely critical after he had a fall, a few days after her being 'offloaded' on January 11. Half an hour later, we hurriedly walk down the steps of her office. On the main road, we wait for ten minutes, while she is evidently flustered, before an auto wallah agrees to drive us to the court. Over approximately 40 minutes that it takes for us to get to the High Court amid heavy traffic, she explains the gross violations to her freedom by the government and the harassment caused to her in the course of the past month.

"This government won with 31 per cent votes. Does this make the rest of the 60-odd percent anti-national? In a vibrant democracy, shouldn't there be space for divergent views?" This situation is one of a silenced Emergency, where freedom is being curtailed and there is secret, illegal surveillance over each one of my activities."

"I booked my tickets to London as late as 9:30 pm on January 9 and my LOC was issued on January 10 early morning. My phone is being tapped and my email has been hacked. How else is it possible for them to track every detail about me, which no one else knows?" she asks.
"Even if they included me in the LOC, shouldn't they have at least notified me about it. They haven't even responded to my two letters asking to be given a copy of this LOC. An extra-judicial body like the IB is being given extra judicial and unconstitutional powers to intimidate and threaten people who speak up against the government. Now they want me to sign an undertaking that I will not speak about violations to human rights in India, in order to travel abroad on work. "Why should I give up my right to travel and speak freely about the truth? While Arvind Subramanium, who spoke against India's trade and patent laws has been made the Chief Economic Advisor of the country, I have been branded an anti-nationalist for protecting interests of vulnerable Indian citizens."

Her phone rings again and this time she explains, exasperated, about how she is required to stay here until Saturday to complete legal formalities, sign the counter-affidavit her lawyer, Indira Jaising, is preparing as a rejoinder to the MHA's claims. She hangs up saying she will leave as soon as this is done. "I am very scared," she tells me. "My father has taken very ill. I need to be there." Before I can respond, we have reached gate number 5 of the Delhi High Court.

Our photographer, who has been waiting there, clicks several pictures of her in five minutes; some with her in front of the court and some others of her standing next to the blue signboard that directs you to the court premises. Through those five minutes, Pillai is evidently preoccupied. Suddenly, almost as if he had interrupted her, our photographer asks her to smile for a close-up. She looks at him confused for a split second and then smiles, what seems like the most reluctant smile ever.