Journalists are sceptical and cynical people. Their first reaction is to conclude that what kids read about in school-books is likely to be a fairy tale. In this case, your correspondent was happy to be proven wrong. When I travelled to Tokyo last week, I got a very specific request from my eight year old daughter. She wanted me to get a picture of a dog called Hachiko. The dog whose photograph she wanted is not some kind of toy or a robot dog that we associate with Japan. This dog figures prominently in an English lesson that she has learnt at school. Initially, I suggested to her that since it is in a schoolbook, it is likely to be a fairy tale, one that has no bearing to real life. I think she got the feeling that her papa was trying to slime out of a perfectly simple task: take a picture of Hachiko. But she persisted and proceeded to give me specific directions to where I would find Hachiko. All I had to do was to get off the train at the Shibuya station and once I got off the train, Hachiko would be there, waiting to be photographed. She wanted a photograph to show her classmates and tell them: "Hachiko is real, and here I got a picture for you to see." Her English teacher would also be, not to put too much of stress on this, suitably satisfied that her student had assimilated the lesson more than was strictly necessary.

One or two small problems cropped up when I landed in Tokyo with a schedule that was packed pretty tight. Where was I going to find the time to go looking for a dog to photograph? The other thing was that I had forgotten to take a camera with me on the trip. How was I going to get that picture of the dog, even if I were to find it, without a camera? Initial enquiries that I made with the rest of the people traveling on the trip brought forth incredulous responses: 'Hachiko? Is that Japanese for sneeze?' But when I asked the first Japanese person I got the opportunity to enquire from, there was an instant smile of recognition. Yes, I would find Hachiko in Shibuya, a bustling shopping area. And, yes, indeed, there is a train station there.

The next task was to find someone with a camera who would understand the situation I was in. I turned to AJ Philip of the Tribune who readily agreed to accompany me for this errand. Besides, his curiosity, I think, was also piqued as to what kind of a dog this would turn out to be. Philip then proceeded to narrate a dog story that I found rather sad. Apparently, a friend of his had a dog in a southern town in India. It was more a puppy really. After some months, this person decided that it was not possible for him to keep the puppy and decided to let it go. He took a long drive down to another city more than a hundred kilometers away and left the dog there and returned home. One year later, the dog turned up at his home. There he was, outside the door, tail wagging furiously, all excited and waiting to jump at his master. The intervening months had not been kind to him. He had grown bigger and the collar that had been around his neck was still there but it had cut into the flesh in the neck and it was full of sores as was the rest of his body. But there was no mistaking the excitement in the dog that was happy to have found his home. The master was in a dilemma. He still didn’t want to keep the dog. He solved the problem by putting the dog to sleep—forever.

It was a sad story. But I was glad to have Philip for company as I set off to Shubiya to find Hachiko. Prem Panicker from rediff also joined in. When we finally reached Shubiya, we walked around for a bit till we saw a station entrance with Japanese people flowing out of it in an orderly fashion. (When the Japanese park their cars, there is a uniform distance between the cars. They don’t jump red lights. It looks like the kind of country where rules work.) And, indeed, this station entrance was called the Hachiko Entrance. Right besides the entrance was a huge mural full of dogs of various sizes and shapes. I duly got a picture taken in front of the mural. But someone had the presence of mind to ask: "Which one of these is Hachiko? Shouldn’t we make sure, having come all this way?" So I asked a policeman. He pointed a little way away, to a spot where there was a small crowd of people, and said, "Hachiko is there". 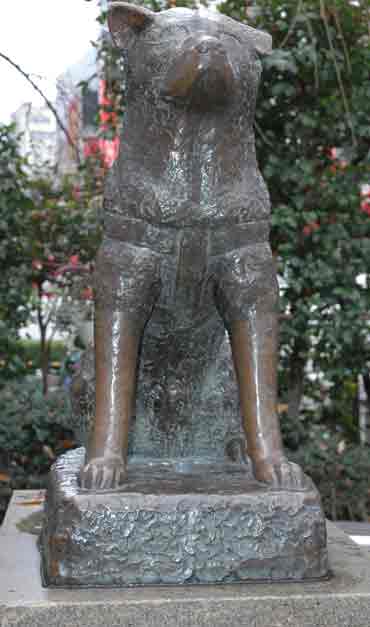 Hachiko turned out to be a huge bronze dog. It was sitting on its haunches and looking towards the station entrance. It didn’t look as though it was part of a fairy tale. The metal was cold to my hand. There were people taking pictures of Hachiko —and pictures of themselves standing with Hachiko.

This was the photo-op my daughter wanted.

What’s the deal with the dog? I was asked by all those accompanying me. For those who have been patient, this is the story as my daughter’s lesson has it:

Hachiko belonged to a professor in the Tokyo University. He found him as a puppy, all miserable and wet and shivering one rainy night, and took him home. They bonded, the pup and the professor. The professor took the train to the University from Shibuya station every day. And everyday, Hachiko would accompany him to the station. Outside the station, the professor would pat Hachiko goodbye. The dog would watch the master disappear among the crowds in the station and then go out to the square outside and play. When the professor got back in the afternoon, the dog would be there outside the station waiting for him. They would then walk back home together. When the dog was two years old, the professor died while he was in University. Only, Hachiko didn’t come to know about this, and he went to the station to wait for him. Days turned into weeks and weeks turned into months and months turned into years. Still, Hachiko would wait. He did this every day, for the next ten years. Seeing the dogged faithfulness of the animal, the people in the area decided to make a statue of him. Once the statue was made, Hachiko would play around the statue.

Finally, age caught up. He died one winter waiting for the professor at Shibuya railway station. When Japan joined in the second world war, Hachiko’s statue was melted so that the bronze it was made of could be recycled for the war effort. But after the war, they decided to revive Hachiko's memory by erecting another statue of him. But by then, the person who had made the original statue had died. So they asked his son to recreate it.

That’s the statue that my daughter wanted photographed.

As I stood looking around the spot, Christmas spirit was already in the air. It was a bright day, and there was no sign of rain in the clear sky. A Christmas tree stood nearby. It was full of decorations. There were people all around, all going about the business of life. It would have been simpler to get a picture off the net. But it wouldn’t have been the same thing. So here it is, Hachiko, the faithful dog. Merry Christmas!