Who defines Sathya Sai Baba? His rich and powerful followers or his meek and poor devotees? 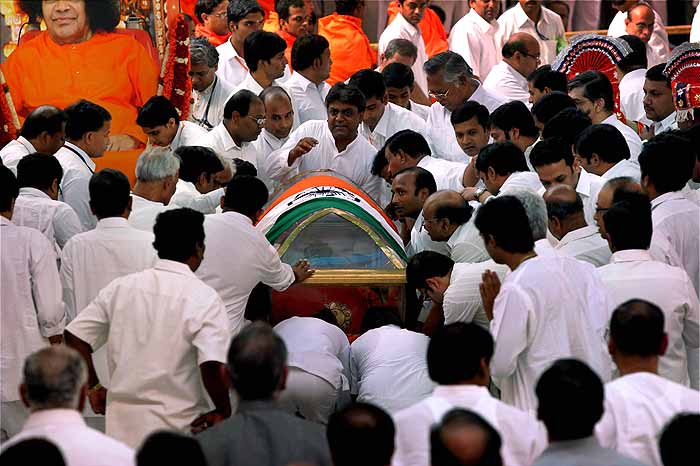 Who defines the present day godmen? Their poor devotees or their rich and powerful followers? This was the question that kept nagging me during my brief visit to Puttaparthi.

'Faith' is often brandished as an element that binds the rich and the poor in service of their gurus, but that was not in evidence inside Prashanti Nilayam or en route to the Sathya Sai Baba's ashram. The brand Sai Baba and Puttaparthi seemed to be defined by the people who had power either through their riches or through the high office they held. They had a separate road to reach the ashram; they had their jets to bring them there; they entered the Sai Kulwant Hall where the Baba lay in state, through a special door, and they got the best view of the Baba lying inside the casket.

In the last three decades or so, the Baba, it is said, had gradually stopped performing miracles. This, in a way, to me, signifies his moving away from the ordinary folk. Let's be assured that it is the poor who need miracles, while the rich can sponsor them. While the initial reputation of the Baba was built on miracles, his legacy now is said to be his charities in the field of health, education and public works. Charities mean big money and that implies big associations. It is a business model for a soft and progressive public image, only slightly different from the corporate social responsibility initiatives of big corporations. Therefore, not surprisingly, after he fell ill and his health rapidly deteriorated, the hottest topic of discussion was the wealth of the trust and who would get to manage it. Isn't it ironical that we aren't discussing the teachings of a spiritual guru, but are only counting his wealth, as if he were a rich businessman or aristocrat who has died intestate and without heirs?

I can't recall a single discussion on television or in the print media where the philosophy of the Baba was discussed. He probably had none. In that sense he was a new-age guru. Many of the volunteers whom I met at the ashram told me all of Baba's teachings were contained in the word 'love'. They sported the slogan 'Love All, Serve All' on the shirts they wore. And how long can one debate the nuance of this formulaic, platitudinous statement? It only allows extrapolations from an inspired follower, but that is no reflection of the original proponent's philosophy. Out of sheer curiosity, I tried to listen to one of Baba's taped discourses at one of the souvenir shops, it was again filled with similar uncomplicated messages, although presented through delightful analogies. Sample one of them: "If the overhead tank is filled with dirty water then the water that flows in the tap will also invariably be dirty. Likewise, if your heart is filled with impure thoughts then what will come out of you will be negative. Therefore fill the tank called heart with love. When we say god is inside us, we don't show our head, but we show our heart. So, follow the path of your heart."

The fact that wealth and power defined and continues to define the Baba was also apparent when an editorial in the Hindu tried to subtly distinguish the Baba from a Ramana Maharashi, a Vivekananda, a Aurobindo and a Paramahamsa. All the others had a definite idea of what they were propounding. Their teachings were layered. In short, they had a philosophy to present and represent, but one isn't sure what ideas the Baba seriously considered. What line of rectification he proposed to humanity. Even if one considers this to be a trait of a new-age guru, his other contemporaries at least have a novel instrument in the yoga or a breathing exercise to flaunt a patented spiritual course. In the absence of anything like these, what defines the Baba is sheer wealth, a train of high profile visitors and the opulence of a golden chariot. After the miracles were gradually reduced, his wealth was to put a spell on the poor. It is the poor who constituted the critical mass and the volumes among his followers. The middle classes added value and a shade of respect and believable-ness, while the rich and powerful put the seal of authenticity. In combination, they cause the truth to levitate.

The rich and the poor are two polar ends among Baba's followers, but, interestingly, during the days of mourning the ones who belonged to the middle space were grouped with the poor. They had to jostle with them to get a final darshan. The one abiding image on the road to the ashram, was of travellers from all over lugging their strolleys. The last mile to the ashram had to be walked as vehicles were not allowed. On the two-lane asphalted road, with no trees to escape the scorching summer sun, people walked and walked, resisting even a short break. There was an urgency in their stride. The long trek was not all, one had to also stand in a kilometre-long queue before entering the ashram. Their physical exhaustion was visible to the onlooker, but a kind of stoicism stood out. Nothing else but faith alone could have sustained their ordeal.

How much ever 'faith' may look like a homogenous sentiment, the followers of the 'faith' bring in a great deal of diversity and it was visible on the road and inside the Baba's ashram. The unevenness created tremendous discomfort. In the crowd that lugged the strolleys, there were the young, old and the infirm. There were the lettered and the unlettered. There were various categories of the middle classes and the poor. The class distinctions were evident from what they wore, what they ate, what they carried and how they murmured the 'Aum Sai Ram' mantra. In a teeming pilgrim town to watch the food and water arrangements could be illustrative of some of these points I am trying to make. Clearly, here, the poor had a greater choice. There were charity shops supplying water and food packets. They uninhibitedly accepted them. There were also make-shift 'poori-baaji' and 'chapati-pulsu' stalls. Cut pieces of watermelon were a hot draw. Banana peels were all over the place.

However, the relatively well-heeled were at a loss. They couldn't be seen joining the free breakfast and lunch queues on the Chitravathi Road. They perhaps were wondering where to stay the night; where to drop their luggage and, importantly, where to leave their footwear before entering the hall, because it looked nearly impossible to recover them from those small mounds already lying outside the ashram complex. The poor didn't seem to have any worries. Most were barefoot. The footwear that formed the little mounds were either made of rubber or with rexine tops and hard soles. Exactly like the ones we see left behind when riots take place. They were seen also dipping themselves in the tanks built for pilgrims by the road side. They were drying their clothes on the dusty shrubs. While the poor knew that getting into the queue was the only assured way of making it to the mourning hall, the others were making enquiries of special entry points to sneak in. Each one's journey to see their Bhagwan's mortal remains were filled with mundane details and manoeuvres.

Even inside the Sai Kulwant Hall, the barricades and the entry points smacked of hierarchies. The body, kept in a glass casket, was not so much visible to the naked eye, but the VVIPs making their entry and circumambulating the body was a clear spectacle. In fact, that was the only game being played at the media stand, roughly 50 feet away from the centre. Who arrived and who was scheduled to arrive next was a running commentary that was happening on mobile phones. When men and women of lesser importance walked in, say an ordinary MLA or an MP or a state minister, it was found unworthy of reporting back. That indirectly spoke of the standards that the Baba's ashram had, hopefully inadvertently, set.

When heads of governments troop in, then, the definition of a VVIP or VIP had to be suitably altered. It is not the poor devotees who defined the Baba, but it was the rich and the powerful. In fact the poor were hurried through the darshan. They got only a fleeting glimpse of their guru. To be precise, it was just two seconds. You couldn't stand to pay homage, the pat of the blue-scarfed volunteers kept the people moving. There was enormous discipline inside the hall. It was even scary. The people-lines were straight, they aesthetically parted away into thin streams after they went past the post. There were no delirious outbreaks, no awkward display of grief, but only occasional sobs. That is not how the poor mourn, I thought. Everybody there was wired to speak the same language. They said: "Baba has not left us, he is here amidst us. He'll be reborn. Someone like the Baba can't die. Death is for mortals." That was hypnotic and that was a miracle. That was faith.

'Faith' is something where the participation of the receiver is as essential and important as that of the giver. It is a participatory process where two energies have to meet for something 'miraculous' — if not a 'miracle' — to happen. However, in this process the 'receiver' is far more generous than the 'giver.' In fact, he is generous to a fault because he creates a special realm with his magnanimity where reason, logic and all natural laws are rendered inoperative. The 'giver' simply presides over this new cosmos that has been created. In absolutely bad cases, instead of an innocuous presiding over there may be exploitation. We have seen such a thing happen in recent history, when faith in the 'Ram Janambhoomi' was used for political ends by some people. But once the cloak fell, the movement dissipated.