Other than Blueline bus drivers, Delhi’s landlords are perhaps the city’s single-most vilified, demonised, traduced and abused resident group. They cut the water supply, hook their ACs to your metre, spy on female tenants, growl at alleged odours from the kitchen. Every migrant I know has a "wicked landlord" story. As it happens, I don’t. 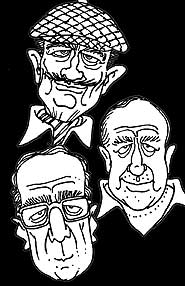 I was lucky, I suppose. As landlords, I met good, upstanding specimens of middle Delhi—alright, middle Defence Colony—three disparate elements of the city’s social mosaic who went on to become friends.

I began in a room above Brigadier Duggal’s garage. A large, loud man, he told me stories of old wars, usually ones with labour unions at the PSU plant he ran post-army. Pushing 80, the brigadier and his wife had busier evenings than I did (or still do). We often came home around the same time—they, for a respite from the social whirl; me, from night shift.

Their ground floor filled up only in the winter, when the children and grandchildren arrived, from Hyderabad and America and farther afield. The Duggals were the prototypical NRI parents. Delhi is full of them, but I didn’t know it then: old people who spend the year pretending to be busy, waiting for a fortnight of family reunion.
Next stop: the Entrepreneur. Three years after Mr Bhardwaj gave me his barsati, he became a case study: the first person I knew who’d lost his job thanks to the WTO.

Mr Bhardwaj worked in an import consultancy, the type that "sorted out" your customs hassles, helped you leap over tariff barriers. One evening in 2001, I found him forlorn. We went for a walk, and he told me his company was shutting down: "Yeh WTO ka chakkar hai ... Aap to jante hain, aap journalist hain."

He had lived in Def Col all his life, knew everybody in A Block, or so it seemed. "Why don’t you become a property broker," I suggested, "you have the goodwill."

He liked the idea, thanked me for it and is today—to my utter bewilderment—one of the neighbourhood’s leading "property consultants". He’s got himself an office, also runs a courier agency and is diversifying into "home fittings".

In 2002, I walked down to Mr Bhardwaj’s apartment and told him I was getting married and needed to move. He implored me not to but my mind was made up. "Okay," he said after a moment’s silence, pragmatism quickly overcoming the temporary emotion, "in that case let me find you a new flat... And I won’t charge brokerage. It’s a wedding gift."

So my old landlord found me my new landlord, Mr Saggi, the (Fellow) Migrant Who Made Good. We liked the Saggis’ apartment but couldn’t afford the rent. He wasn’t budging, until he discovered I was, like him, from Calcutta. Two Punjabis broke into Bong, and a deal was done.

For two years now, my wife and I have had to go up to Mr Saggi, nudge him, tell him rates are rising and inform him we’re unilaterally hiking our rent. He’s never asked, not once. Now do you wonder why I like Delhi?