Advertisement
Home International
Down Under 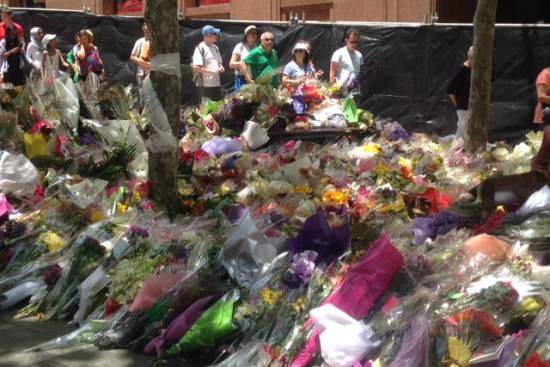 The Christmas tree stands tall in Martin Place, the heart of Sydney’s government and financial district. But the focal point this festive season is the floral memorial, a few blocks away, where a lone gunman had taken 17 people hostage inside the Lindt café last Monday.

Terror had struck home. The news spread like bushfire, consuming the world’s attention. Suddenly, for Australians, the realisation had dawned that despite the distance, the island continent country was not immune from terrorism.

It was like any other summer day. Sydneysiders were making their way to office, picking up their morning coffee, which is almost a ritual in this Harbour City, from one of the many cafes dotting the Central Business District. But what ensued surprised and shocked not just Australians, but people across the world.

Since then the outpouring of grief has continued unabated. Australia is one of the most multicultural countries in the world. The Australian Bureau of Statistics [ABS] in its 2011 Census recorded a total of 273 different nationalities. People are coming from far and wide to pay their tributes to the victims of the siege with flowers, handwritten notes, soft toys and Lindt chocolates. Strangers, united in grief, can be seen hugging for comfort.

Until December 15th, most Australians had never imagined an incident like this taking place in their own backyard. But Professor Greg Barton, Director of Global Terrorism Research Centre at Melbourne’s Monash University says, “We have long been concerned about home-grown, lone wolf terrorism and we are finally having to deal with it. I don’t think this is the last of it. Others will copy what occurred”.

“The horrible development from this incident is the emergence of the tactic of hostage taking as an effective way of getting international media attention. Groups like the Islamic State [IS] and other Al Qaeda derivatives, more than anything, want media attention”, Prof. Barton told Outlook.

The siege had continued for 16 hours, ending in the deaths of two hostages— Katrina Dawson, a leading barrister and mother-of-three, and Lindt Cafe manager Tori Johnson; and the hostage-taker, Man Haron Monis, a 50-year-old Iranian who was granted asylum in Australia in 1996. Amongst the 15 freed hostages were two Indian Infosys employees, Viswakanth Ankireddy and Pushpendu Ghosh.

In September, Australia had raised its threat level from medium to high. High means that a terrorist threat is likely. “As has proven to be the case”, says Nick O'Brien, Associate Professor Counter Terrorism at Charles Sturt University in Canberra. “I would not be surprised to see more attacks— an attack on a member of the public or perhaps a soldier or police officer is just as likely. IS had claimed that the attack against a Melbourne police officer earlier this year was inspired by the leader of IS”, he added.

So has Australia’s closeness to the United States and participation in the military coalition fighting the IS made it a greater target? Perhaps. Prof Barton says, “We are a US ally and we have been involved in military actions in the Middle East and that all contributes, but the reality is that we have people recruiting for IS within our society and we have Australians going to fight in Iraq and Syria. IS is a very powerful, inspirational brand for young people who are vulnerable to radicalisation”.

Australia has become a significant source country for foreign fighters. Around 70 Australians are currently fighting in Iraq and Syria and 20 have already died in the conflict, according to the Australian Security Intelligence Organisation [ASIO].

In her address to the United Nations Security Council in New York in November, foreign minister Julie Bishop had said that the “threat from ISIL, or Da’esh, al-Nusrah Front and other Al-Qaeda affiliated groups is more dangerous, more global and more diversified than ever before.

“Young people like a 17 year old from Melbourne who grew up in a typical Australian household and played sport for his local high school. Recently, he travelled to Iraq and detonated his explosives vest in a suicide bomb attack in a Baghdad marketplace, injuring more than 90 people”.

A number of new counter-terrorism laws are being introduced, which will strengthen the powers of security agencies and make it easier to identify and prosecute Australians involved in terrorist activities.

Welcoming the “necessary” changes to the Counter-terrorism laws, Prof Barton told Outlook, “Earlier laws made it very difficult for authorities to arrest and construct the prosecution case against individuals, who were seen as dangerous, because the threshold of burden of proof was very high. We have had 30 odd people returning from Syria and Iraq and not one prosecution despite their affiliation with the IS”.

The hostage-taker, Monis, was convicted in 2013 for sending offensive letters to the families of dead Australian soldiers between 2007 and 2009. Last October, he was charged with being an accessory to the murder of his ex-wife, who was stabbed and set alight. He was also facing over 50 sexual and indecent assault charges, but was currently on bail.

Michelle Yammine, who lives only five minute drive from the gunman’s girlfriend’s home in the south-west suburb of Belmore says, “This is reality coming literally too close to home. Why was he not behind bars? Had he been refused bail, this horrible incident would never have happened”.

It is a question many want answered. Prime Minister Tony Abbott conceded on Australian Broadcasting Corporation’s AM programme that Monis was not on a security watchlist, despite his long criminal history and known "infatuation with extremism".

“How can someone like that be entirely at large in the community? These are questions that we need to look at carefully and calmly and methodically to learn the right lessons and to act upon them”, Mr Abbott told ABC.

Bail laws in NSW will become significantly tougher next year. “The new bail laws, starting on 28 January 2015, will make it harder to get bail if you are charged with a serious offence. This would have covered Mr Monis’ situation”, says Phillip Gibson, Partner at Criminal Law firm, Nyman Gibson Miralis.

It has been a week of mayhem and murder. A critical incident investigation has been launched into the police operation. There is an increased police presence in Sydney. And thousands of kilometres away in Cairns, Far North Queensland, where eight children under the age of 15 were found dead on December 19, the 37-year-old mother of seven of the children and aunt to the eighth, Mersane Warria, has been charged with eight counts of murder.