A Gift For Mr Obama

How the build-up to a visit by the American President, possibly in December, affects legislation in India 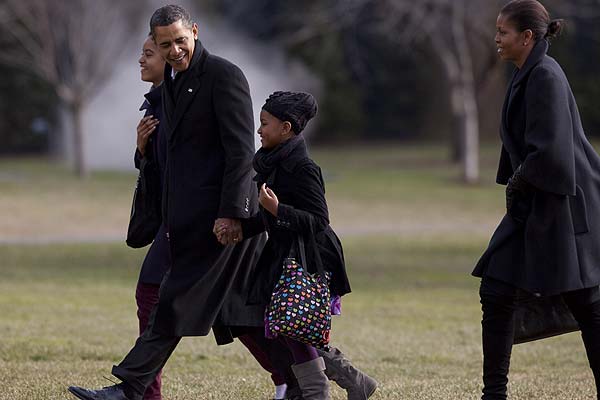 The most powerful and charismatic leader in the world is apparently coming to India possibly by the year-end with his picture perfect family—Michelle, Sasha and Malia. How do I say this with some degree of confidence since there has been no official announcement except for the general statements and reports that President Obama is keen and likely to visit India? Last week I attended a lunch for US officials visiting Delhi. There was a representative from the White House, the India desk in the State Department and from the office of Secretary of State Hillary Clinton, among others. The immediate agenda was to prepare for upcoming the Indo-US dialogue between Foreign Affairs Minister S.M. Krishna and Hillary Clinton, but many of the visiting US officials were candid in one-to-one chats that all of it is a build up to an Obama visit.

What I learned was that he wanted to come with his entire family, so the visit will possibly be scheduled during a school break in the US. December is being looked at as a possibility. Significantly, the thinking in Washington is that Obama should not visit Pakistan during the India leg. Instead, the possibility of him going to Indonesia before or after India is on the cards. Between the age of 6 and 10 Obama attended school in Jakarta, so we can imagine the hype such a journey would generate.

There is, of course, a huge domestic component of his visit. A large media contingent will accompany him and, like all first term US presidents, many calculations are now geared towards the second term. So the entire exercise, as his officials are planning it, is designed to make Obama look good. He certainly has an edge over George Bush as, the world over, his entry into the White House was seen as inspirational. I know that in India the strategic community has a special place in its heart for Bush because of the nuclear deal and resentment has built up over the Obama Administration’s Af-Pak policy. I also have no pretensions about understanding the finer points of foreign policy. But let’s face it, for the average world citizen Obama is not a hated figure that anyone would want to throw a shoe at! He is one of the most exciting world leaders with the aura of a star. Like people across the world I had sat up and watched his speech after he won the US elections. I must confess it’s hard to sit through a speech made by any Indian politician.

In June-July last year I had visited the US for a month on a state department invite and it was clear that opposition to Obama was becoming virulent and would get worse from the conservatives and the right wing. But at every public appearance, the obvious talent and easy manner was visible. During my US trip, visits were organized at think tanks, the US Congress, a governor’s office, media outlets, and the unanimous view, even held by the Republicans was that love him or hate him, Obama was star. Take the example of the Capital Steps a legendary political satire that has played in Washington DC for the past 25 years. It began when a group of senate staffers set out to satirize the people they worked for. Last summer when I saw the show, the Capital Steps pilloried the ditzy Washington press core that was so starry eyed about him. A gaggle of scribes were shown falling over each other to get close to the president as they sang “Obama Mia” set to the tune of the Abba classic “Mama Mia”! One of their best political spoofs was a rendition of “When Bush came to shove”.

So should Obama and family actually arrive on Indian shores, have no doubt that our media shall get quite hysterical. I really have no idea what the diplomatic fine print could consist of. But an intelligent guess would be some strong statement from the US president about terrorism. From the Indian side what can we offer? All the US officials I met at the lunch last week asked about the nuclear liability bill and the foreign universities bill. These are the areas on which the Americans would like the Indian government to move.

On May 4 the government introduced the Foreign Educational Institutions (Regulation of Entry and Operations) Bill in the Lok Sabha that would allow foreign universities to set up shop in India. The bill is fiercely opposed by the communists. On May 7, the last day of the budget session, the Civil Liability for Nuclear Damage Bill, 2010, (whose passage is a key requirement for operationalisation of the Indo-US nuclear deal), was moved by Minister of State in the PMO Prithviraj Chavan. The bill seeks to provide limited liability in case of a nuclear accident and was introduced amid protests and by the Opposition NDA and Left parties. The bill will now be discussed in a Parliamentary Standing Committee headed by SP’s Mulayam Singh Yadav, which is expected to submit its report in two months. Significantly, the bill was tabled with the support of the SP and RJD.

As the UPA government has mastered the technique of getting the support of different parties for different legislations, one can only presume some understanding has been worked out with the Yadavs. They would certainly be happy with the government broadly agreeing to a caste census as this exercise has the potential of extending a lifeline to their shrinking bases in the future.

Another very interesting question is: What will happen to the Women’s Reservation Bill, that Sonia Gandhi has staked her reputation on? Sources in the party say that Mulayam has suggested that she should wait till the end of the UPA’s term to move the bill in the Lok Sabha. But Sonia has reportedly told key Congress leaders that she is willing to stake her government on it. She has been told that the foundation stone for women’s reservation has already been laid in the Rajya Sabha and now it’s just a matter of finding the expedient time to move it.

And if the focus will start shifting to legislation that the Americans have a stake in, it is highly unlikely that women’s reservation will be pushed till Obama comes and goes. As an observer of political pulls and pressures one can only connect the dots and come up with an intelligent guess. And any US president is a big dot. So if the Obama visit does happen (and he does indeed snub Pakistan by not planning a parallel trip to Islamabad), there will be a lot of hype and hysteria, but also an attempt to give the Americans what they want.