A Handshake Across The Himalayas 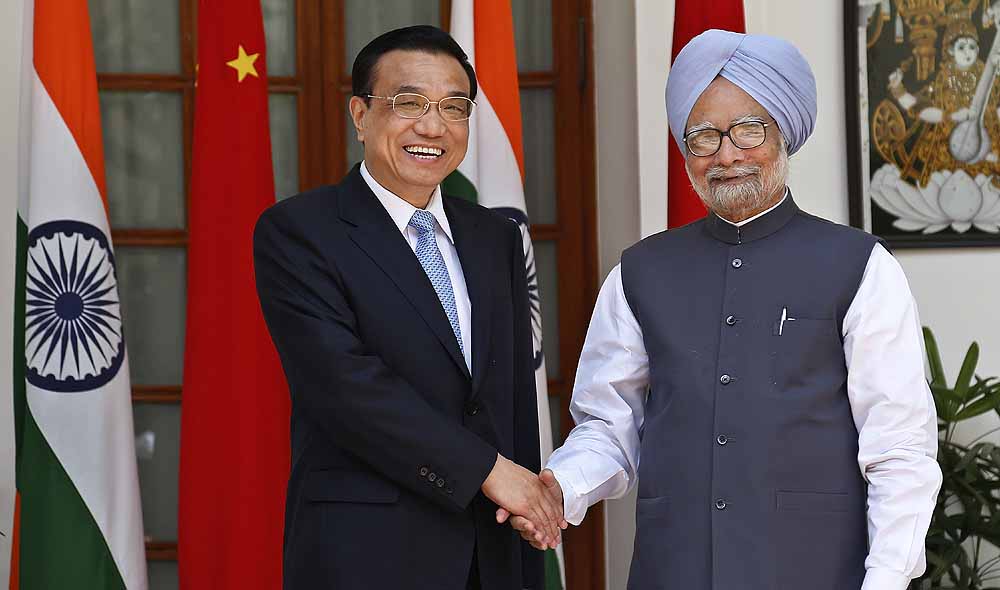 We live in an age of change, but there are always certain things that are enduring, forever refreshing and attractive. India is such a nation, at once old and young. I will be leading a Chinese government delegation to India, the first country I will visit as the Premier of China. I am very much looking forward to it and hope to make some concrete contribution to deepening the friendship and promoting cooperation in various areas between China and India.

Both China and India have a long and great history that goes back thousands of years. The Chinese and Indian civilizations are among the oldest of human civilization. They represent the two pillars of the civilization of the East. The towering Himalayas have not prevented them from mutual attraction and illumination. Fahien and Huen Tsang, two eminent Chinese monks of the Jin and Tang dynasties respectively and Bodhidharma of ancient India all made outstanding contribution to religious and cultural exchanges between China and India. In my student days, I already had a strong interest in India. I was impressed by the memorable poetic lines and the deep philosophical insights of Rabindranath Tagore, the famed "sage poet," and moved by his profound friendship with the leading Chinese authors of his day. There was a Chinese Indologist at my alma mater, Peking University, with whom I was well acquainted. He spent his whole life studying and teaching ancient Indian culture and in recognition of his contribution, he was awarded the Padma Bhushan. Indeed, from generation to generation, our two cultures have learned and benefited from each other through exchanges and as a result, they have both flourished with the passage of time.

When I first visited India 27 years ago, I was struck by her warm sunshine, brilliant colors, beautiful arts, hard-working and talented people and amazing splendor and diversity. As far as I know, the India of the 21st century is taking a fast track of innovation-driven development. Bangalore, the "Silicon Valley of South Asia," is home to about 1/3 of IT talents in India; it is not only the ICT center of India, but also a hub of software services in Asia. India's manufacturing sector has also moved forward. Tata Motors ranks among the world's top five manufacturers of commercial vehicles, and Tata Global Beverages is the world's second-largest producer of tea. I have read that Steve Jobs, the late CEO of Apple, had traveled to India with no other purpose than to learn yoga and meditation. It is believed that this gave him many inspirations and resolve for innovation. Now, a growing number of Chinese youth are backpacking across your country, intent on discovering and appreciating India's magnificent culture and retracing the footsteps of history.

China and India, two big Asian countries living next door to each other, are destined to be together.

Since modern times, our destinies have been more closely tied than ever. Our peoples sympathized with, supported and helped each other in their quest for national independence and liberation, leaving behind a trail of touching stories. Afterwards, our two countries jointly initiated the Five Principles of Peaceful Coexistence, which have become the important basic norms underpinning the new type of international relations that we both seek. Our two countries have worked shoulder to shoulder to uphold the rights and interests of developing countries, giving lasting traction to South-South cooperation.

Today, the handshake across the Himalayas is even stronger. Facing the same task of boosting the economy, improving people's living standards and reviving the nation, both countries need a peaceful and tranquil neighborhood and external environment and wish to achieve win-win results through dialogue and cooperation. India, a strong Asian nation and a major country with global influence, is playing an increasingly important role in international affairs. India, a BRICS member with robust economic growth, is playing a significant role for peace and prosperity in South Asia and in the Asia Pacific in general. China is happy to see the growth momentum of India and ready to expand and upgrade Sino-Indian cooperation to the benefit of all-round economic and social development in both countries.

There is no denying that China and India still have between them some difficult issues left over from history. But the rich historical experience and the broad vision, which are common qualities of big countries, serve as the basis for China and India to take a long-term view and live in amity with each other. With joint efforts in the past few years, the two sides have gradually found a way to maintain peace and tranquility in the disputed border areas, and have learned to deal with the situation in a reasonable and mature manner. Both agree that the common interests between China and India far outweigh their differences and that the two countries should enhance mutual trust rather than increasing mutual suspicion. I believe that as long as we draw on wisdom and strength on our way forward, there will be no obstacle that we cannot overcome. As long as we face the problems squarely and talk to each other with sincerity, we will eventually find proper solutions.

China is a big country that is growing and peace-loving. What we Chinese value most are "Do not do onto others what you do not want others to do onto you" and the philosophy that stresses the importance of good faith and making friends with neighbors. China is more developed than before, but it remains a developing country. Even if China becomes strong one day, it will never embark on the doomed path of seeking hegemony. We suffered immensely from foreign bullying, wars and chaos and know so well that the same tragedy should not be allowed to happen to anyone ever again. China has a long way to go to achieve modernization. To successfully manage a populous big country like China, the top priority is to ensure the supply of seven daily necessities, namely firewood, rice, cooking oil, salt, soy sauce, vinegar and tea. In other words, we have to address the most immediate concern of our people in everyday life. The Chinese people want better education, more stable employment, more reliable social security, more comfortable housing, more colorful cultural life and national stability and prosperity. It is not easy to deliver all those to our people and modernize the country. We must focus on self-development and that calls for a peaceful international environment. We need to live with our neighbours in harmony and make friends in the world. To pursue a path of peaceful development is the unwavering commitment and firm action of the Chinese people.

China owes its rapid growth to continuous reform as well as external cooperation. Interdependence is a defining feature in state-to-state relations in this era of globalization. China is a beneficiary and a defender of the existing international order and system and stands ready to work with India and other countries to advance reform of the system. China will undertake international obligations commensurate with its national strength. We stand ready to embrace the world with a more open mind and hope that the world will view China with a calm frame of mind.

Both China and India are big countries in size and in population. Together, the populations of our two countries exceed 2.5 billion and account for nearly 40 percent of the world's total. We are viewed as the two most important emerging markets. However, our bilateral trade volume was less than 70 billion U.S. dollars last year. This is incompatible with the strength and status of our two countries, but it also points to the huge potential for expanding and upgrading our bilateral trade and business cooperation. This is an issue that the two sides must work to resolve together.