A Humdinger Of A Win

'Too tense for the hearts, but a great act,' were Dravid's words. Sure it was, as the skipper's 105 and Kaif (66) helped weather some heart-stopping moments before touching the tape with one ball to go for their 17th successive victory while chasing. Riding on the back of a captain's knock by Rahul Dravid, India overcame a minor top order collapse and some heart-stopping moments towards the end to coast to their 17th successive win while chasing in the first one-dayer against the West Indies.

Chasing a challenging 251 for six in a rain-shortened match, the Indians rallied around a composed 105 off 102 balls by Dravid to come closer to victory, but still had to weather a last-minute fightback by the home side before winning with a ball to spare at the Sabina Park on Thursday.

Needing 43 runs off 37 balls at Dravid's fall, the Indians saw the tie go down to the wire with six required from six balls for the win.

The battle-hardened Mohammad Kaif and the young Suresh Raina, teammates of Ranji Trophy winning Uttar Pradesh, kept their nerves to see the Indians home and give the tourists a 1-0 lead in the five-match series.

"I guess it was too tense for the hearts, but it was a great act," said Dravid after the nail-biting finish.

Kaif, 66 not out, brought the winning runs, a cover driven four off Dwayne Bravo.

The middle order batsman, woefully out of form in the last two series against Pakistan and England, also featured in a 123-run fourth wicket stand with Dravid that laid the foundation for India's win.

Man of the match Dravid's 12th career hundred and the third against the Caribbean nations put to shade Chris Gayle's hurricane 123 off 131 balls earlier in the day.

Gayle's cracker of an innings left Dravid ruing his decision to put the hosts in before his bowlers put the skids on the West Indian scoring in a match reduced to 45 overs a side following heavy overnight and early morning rain.

The tall left-hander smashed 18 fours and two sixes in his knock but found little support from the rest of the team with captain Brian Lara being the second top scorer with 35.

Ajit Agarkar was the pick of the bowlers for India with two for 38 while Harbhajan Singh returned an economical 1-33.

Irfan Pathan (1-52) and Munaf Patel (1-48) too came back for tidy second spells after being carted all over the park with the new ball.

"We are going to be competitive (in the remainder of the series) and there will be an improved performance on Saturday (in the second ODI), maybe we will even win," Lara said. 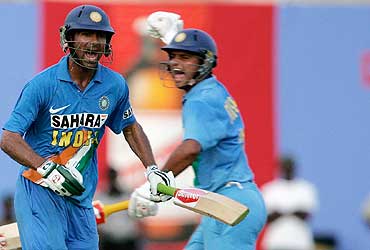 Dravid gambled on the moisture and green look of the wicket to opt to field first but his bowlers wilted early in sapping heat on a slowish wicket.

Gayle and Runako Morton (23) pounded the Indian new ball bowlers as they put on 87 for the opening wicket, 74 coming in the first 10 overs.

Pathan began with three wides and two no-balls and by the third over had gone for 25, including four fours by Gayle.

Gayle raised his half-century from 46 balls with 11 fours before the Indians clawed their way back with two wickets in four overs.

Agarkar, the most impressive of the lot, provided the first breakthrough in the 14th over when he induced an edge from Morton to wicketkeeper Mahendra Singh Dhoni.

Harbhajan then won a leg-before shout against Ramnaresh Sarwan as the West Indies slipped to 94 for 2 in the 17th over.

Lara then added 82 for the third wicket with Gayle before his full blooded shot was latched on to by Kaif at cover.

Gayle slowed down at the approach of the three-figure mark which he reached through a single from an inside edge.

The wiry Jamaican celebrated his 12th career hundred, and fourth against India, with another huge six and two more fours before Dravid came up with a stunner at mid-wicket off his on drive against Agarkar.

The Indians were off to a steady start with Dravid and Sehwag notching up 56 runs inside the first 10 overs before a smart piece fielding by Marlon Samuels broke their stand.

Sehwag middled the ball well, displaying sound footwork which he has often lacked in the past.

But his innings of 22 came to an end when Samuels, having misjudged a skier, quickly recovered and his throw to the striker's end caught the batsman short of the crease.

What aggravated the situation for India, however, was the cheap dismissal of Pathan and the off-colour Yuvraj Singh.

Pathan failed to get his cut shot on top of Ian Bradshaw and was caught in the slip cordon.

Yuvraj (12), after struggling to rotate the strike, tried to hit his way out of the trouble and ended up mistiming his lofted drive.

This time, however, Samuels made no mistake and nicely held on to the high catch.

It was left to Dravid and Kaif then to see the tourists home, which they did in a composed manner.

Kaif was put down twice, by Lara early on in his innings and then on 35 by Fidel Edwards, but never did he nor his captain panicked as the chase entered the climax.

Dravid reached his hundred with a single to mid-wicket off Edwards, the milestone coming from 99 balls with nine fours and two sixes.

The skipper fell soon though, a tiring heave falling into the safe hands of Jerome Taylor at long on.