The country grieves as its king is allegedly killed by his son, the heir apparent. Nepal's King Birendra Bir Bikram Shah Dev, shot dead by his son, along with his wife and some other royal family members on Friday night, was a visionary who firmly believed in close and cordial relations with India and other South Asian neighbours and will go down in history as a monarch who led Nepal through changing political times, once ruling over world's first and only communist monarchy.

Born on December 28, 1945 to King Mahendra Bir Bikram Shah Dev and Indra Rajya Lakshmi Devi Shah, at the Narayanhiti Royal Palace, the official residence of the Nepalese Monarchs -- the same place where he was shot and died last night.

He was educated at a catholic missionary school St Joseph's School in Darjeeling (West Bengal, India) followed by years at Eton College in Britain, the University of Tokyo in Japan and Harvard University of the United States -- the most educated person to become monarch of the 275 year old Shah dynasty.

Birendra, who played an active role in the establishment of the South Asian Association for Regional Co-operation, ascended the throne on January 31, 1972, following the death of his father and ruled Nepal for three decades, first as absolute monarch and from 1990 as constitutional monarch.

His first state visit after accession was to India in October 1973 and China two months later, reflecting his desire and willingness to give a new impetus to strengthen close and cordial ties with the two immediate and next-door neighbours.

Throughout the 1970s, the King sought to expedite economic development programmes while maintaining a "non-party" political system established by his father. The results were disappointing on both accounts, and by 1979, a systemic crisis was evident.

To meet the first serious political challenge to the monarchy since 1960, he announced in May 1979 a national referendum to decide between a non-party and multi-party political system.

However, in the referendum held in May 1980, political groups supporting the non-party system won by a relatively small margin of 55 per cent.

King Birendra decided to retain the 1962 constitution, but to liberalise the political system by providing for direct popular election of the National Assembly.

Though elections were held on a "partyless" basis, many candidates began openly representing political parties.

In April 1990, he lifted the ban on political parties, abrogated the more repressive security ordinances and on April 16 appointed an interim government, paving the way for major political reforms which made Nepal a constitutional monarchy and a multi-party parliamentary system.

Parliamentary democracy or yearnings for a communist state notwithstanding, for many simple, uneducated Nepalis, the King was a much-loved man, venerated as a god, if not the God -- as all kings in the Himalayan kingdom traditionally pitched as reincarnations of Lord Vishnu. 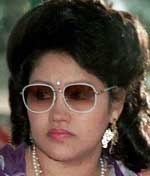 Queen Aishwarya Rajya Laxmi Devi Shah was born on November 7, 1949, in Kathmandu, the eldest daughter of a lieutenant general in the Nepalese armed forces. She was educated in India and Tribhuvan University in Kathmandu.

Her greatest contributions to Nepalese society revolved around increasing opportunity for women in the Himalayan kingdom.

Queen Aishwarya Rajya Laxmi Devi was a champion of the cause of women and children of Nepal.

Awarded the Save The Children Distinguished Service Award by the Save the Children Federation of the United States of America in December 1983, the queen also played a significant role in the advancement of Nepalese women.

The Queen was also honoured with a Medal of Distinction, one of the most outstanding Lioness medals, by Lions International USA on November 23, 1985.

She had her early education at St Helen's Convent, Kurseong and St Mary's School in Kathmandu.

She did her higher studies in Intermediate of Arts from the Padma Kanya College and later took a Bachelor of Arts degree from Tribhuvan University, Kathmandu.

Everything Has Been Lost

Rana Jagdish Shamsher, a close relation of Nepal's King Birendra, described the assassination of the King, Queen Aishwarya and other members of royal family as "the biggest tragedy" of his life and said "everything has been lost".

"My misfortune is that there is no one left to console and i will go to Kathmandu on the 13th day for the last rituals."

Rana said that he had a chance to meet all the members of the royal family at the 81st birthday of the oldest living lady of the family at Kathmandu just 15 days back and he was yet to convince himself that "the family" was no longer there.

Rana, who had left Nepal after the parliament was dissolved in 1961, and is settled here in India since then said that a minor dispute over marriage of the prince had led to a situation which was avoidable, had the queen allowed the prince to marry the girl of his choice, who was also from a very respectable royal family.

He said he was particulary sorry for the King whom he considered to be an ardent democrat who introduced the parliamentary system in the country.

Gyanendra, the younger brother of King Birendra, was destined to become the King and it was a game of stars, he said adding, "what more can I say about this horrible incident which had changed the complexion of Nepal?".