A Massacre In Lahore

Though the Ahmadis had been subjected in the past to persecution and atrocities by the Sunni extremists, the May 28 attacks are the most brutal acts of terrorism directed against them since Pakistan was born in 1947 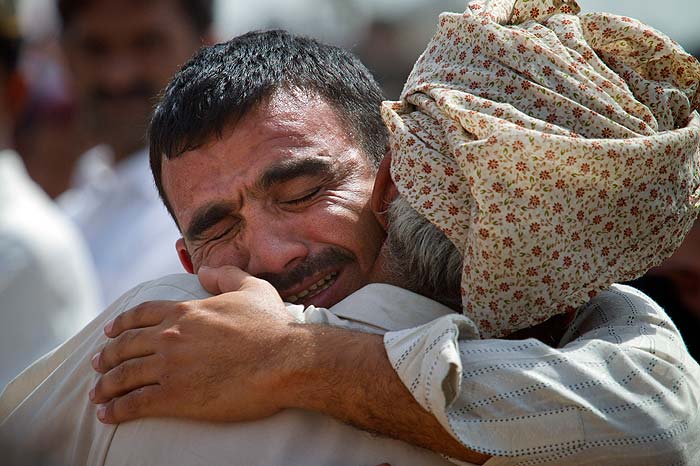 Eighty persons were killed and over 120 others injured in two acts of terrorism directed against Ahmadi worshippers in two mosques belonging to their community in Lahore on May 28, 2010. Among those killed were former sessions judge Ameer Ahmad Sheikh, the Amir of the Ahmadia community in Lahore Ejazul Haq, and Major General (retd) Nasir Ahmad.

The two commando-style terrorist attacks were staged at the time of Friday prayers in the two Ahmadi mosques located in the Garhi Shahu and Model Town areas of Lahore. Since the Ahmadis are treated as non-Muslims in Pakistan because they do not recognize Prophet Mohammad as the only Prophet of Islam, their places of worship are not recognized as mosques.

These attacks have, therefore, been described by the Pakistani officials and media as attacks on places of worship and not mosques. The Ahmadis, who regard themselves as Muslims despite their reverence for the founder of their community as another Prophet, look upon their places of worship as mosques no different from other mosques. Thus, the two incidents were two more instances of brutal attacks by Sunni extremists on another group of Muslims worshipping in mosques. However, in Pakistan, to describe the Ahmadis as Muslims and their places of worship as mosques would be considered blasphemous. There are five million Ahmadis in Pakistan’s total population of about 180 million.

The security forces are reported to have captured two of the nine terrorists involved in the two attacks. Three allegedly blew themselves up and the remaining four were killed in the exchange of fire. According to the Daily Times of Lahore, the attackers also fired shots and hurled a hand grenade at a nearby mosque of Ahl-e-Hadees, adjacent to the City Law College.

A TV channel quoted the Punjab Law Minister Rana Sanaullah as saying that one of the captured terrorists belonged to Rahim Yar Khan district and used to be a student of a madrassa in Karachi and that the other terrorist captured is a Pashtun.

On March 8, a suicide bomber had rammed his car packed with explosives into a Federal Investigation Agency building in Lahore, killing 11 people. On March 12, two suicide bombers had attacked Pakistani Army vehicles in a military cantonment in the city, killing more than 50 people. There were no major terrorist incidents in Lahore in April.

A statement disseminated from London through the Internet on behalf of the international Ahmadiya community said:

“The attacks are the culmination of years of un-policed persecution of the Ahmadiya Muslim Jamaat, which is a minority sect in Pakistan. In 1974 legislation was passed that declared Ahmadis to be ‘non-Muslim’ and in 1984 further legislation was passed in which the practice of the faith was outlawed. At regular intervals since then Ahmadis have been attacked but today’s attack is the most cruel and barbaric. All Ahmadis, who are based in 195 countries, are peace loving and tolerant people and yet they are continually targeted by extremist factions. During his Friday Sermon at 1pm today (May 28) the Head of the Ahmadiya Muslim Jamaat, His Holiness Hadhrat Mirza Masroor Ahmad, said: “Today two of our mosques in Lahore were attacked by extremists. At the moment we do not have full details of what has happened. It is clear though that a number of our Ahmadis have been killed and many others have been injured. These people had merely come to the mosques to offer their Friday prayers and yet became victims of a heinous terrorist attack. May God grant patience to the bereaved and elevate the status of those who have been martyred.”

A report disseminated from Lahore by the Associated Press said:

“Ahmadis are reviled as heretics by mainstream Muslims for their belief that their sect’s founder was a saviour foretold by the Quran, Islam’s holy book. The group has experienced years of state-sanctioned discrimination and occasional attacks by radical Sunni Muslims in Pakistan, but never before in such a large and coordinated fashion.”

The AP report further said that before the attacks the suspect from Rahim Yar Khan had stayed at a centre belonging to the Tableeghi Jamaat.

Geo TV reported that the Punjab province branch of the Pakistani Taliban had claimed responsibility, but the authenticity of the claim is yet to be established.

On April 17, 2010, Dawn of Karachi had reported an increase in kidnappings for ransom and murderous attacks on members of the Ahmadiya community in the industrial town of Faislabad in the Punjab. A member of the local Ahmadiya community had alleged that the Jamaat-ud-Dawa (JUD) headed by Prof.Hafiz Mohammad Sayeed, which is the political wing of the Lashkar-e-Toiba (LET), was responsible for these incidents and that the local police were not taking action against those involved. Faislabad is a stronghjold of the LET. Abu Zubaidah of Al Qaeda, now held in the Guantanamo Bay detention centre, was captured in 2002 from the house of an LET activist in Faislabad. The Ahmadis have been alleging that the JUD and some members of the Pakistan Muslim League (N) of Mr.Nawaz Sharif, former Prime Minister, have been acting in tandem in attacking the members of the community in Punjab. In this connection, they have named Syed Saqlain Shah, a member of the National Assembly, his uncle Syed Iqbal Shah, a former member of the Punjab Provincial Assembly, and Makhdoom Javed Hashmi, senior Vice-President of PML (N).

The LET, which is close to Pakistan’s Inter-Services Intelligence (ISI), never indulges in acts of terrorism in Pakistani territory. It is doubtful whether it would have carried out the terrorist attacks on the Ahmadis despite its past acts of atrocities and intimidation against them. A strong suspect is the Sunni extremist Lashkar-e-Jhangvi (LEJ), which has been involved in acts of terrorism in Pakistani territory for many years. Like the LET, it too is close to Al Qaeda and the Tehrik-e-Taliban Pakistan.

Two other suspects are the Jaish-e-Mohammad, whose leader Maulana Masood Azhar, had served for some years in the LEJ, and an organization mysteriously calling itself the Asian Tigers with no allusions to Islam or the Holy Koran, which looks upon the Ahmadis as American agents. The Asian Tigers were allegedly responsible for the recent kidnapping and execution of Sq. Leader Khalid Khawaja, a retired officer of the Pakistan Air Force, who had served for some years in the ISI. After his retirement, he used to hobnob with a number of jihadi terrorist groups, including Al Qaeda, the TTP, the JEM, the LET and the LEJ, and had come under suspicion in connection with the kidnapping and murder of Daniel Pearl, the US journalist in the beginning of 2002. The Asian Tigers had accused him of being an agent of the US and the Ahmadis. Not much is known about its origin and background. It is possible that the LET or Ilyas Kashmiri’s 313 Brigade also operate under the name Asian Tigers in order to avoid attracting the suspicion of the ISI and the US.