In the encounter two militants, Tanveer and another foreign militant Ali Bhai were killed. 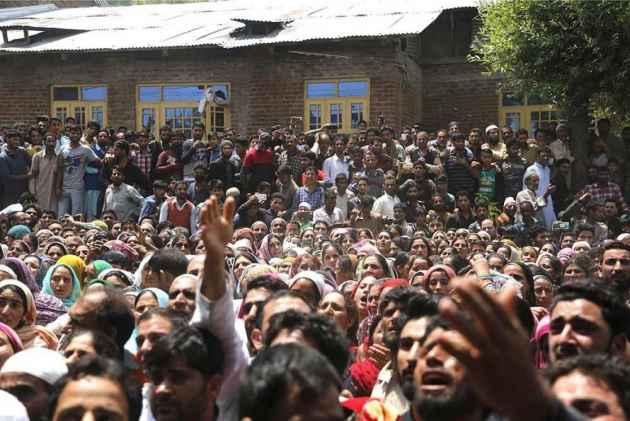 At the entrance of the village over the road, a poster of 19-year-old militant Tanveer Ahmad Bhat brandishing AK-47 is displayed prominently. Both sides of the road are littered with rock pebbles. An elderly man says an intense stone-throwing took place here on Monday when an encounter broke out between the militants and the armed forces.

The elderly man, who was from the neighbouring village, like scores of other villagers -- both men and women -- was on the way to the Batmuran to visit the family of Tanveer.

Tanveer was a local militant. He was the only son in the family who had left his home last year and joined militant ranks.  Tanveer was killed in one of his relative’s home during an encounter, which started on Monday and ended on Tuesday in the village. Around three houses have turned into debris as the forces, according to the villagers, used Improvised Explosive Devices (ED) to bring the houses down in which the militants had taken the shelter.

On Thursday, people from neighbouring villages were first visiting the encounter site. Some women were passing through the rubble without caring that any unexploded device could go off. “The forces blasted these houses,” says a villager. All shops in the village were closed.

In the next Mohalla, around 500 metres from the encounter site, people were coming and going inside a one-storey house. It is here 22-year-old woman, Beauty Jan, was killed. Her brother, who identified himself Parvaiz Ahmad Bhat, 20, was outside the house, which unlike other houses in the area had no boundary wall. In the backyard of the house is an apple orchid. Eleven-month-old Azra was in Parvaiz's lap. He says he took his sister, fired upon by the forces to the hospital, hoping against the hope, that doctors would do “something” to bring her back to life.

“I knew she was dead. She died in the room. I cried when I saw her die. I saw her falling down and dying. I came out, opened the door and shouted at the army men, who had fired at our house. They fled away. I went back to the room and took out my sister,” he says.

Showing the room to the people, he says, the forces around 11 am on Tuesday fired several gunshots towards his house.

“A bullet penetrated through the wooden window and hit my sister, who was standing in the room. She fell down in our uncle’s lap,” he says.

He took his sister through the apple orchard field from the backside of the house. “Several other youths helped me. Once I reached the road, I put her someone’s vehicle and rushed to the hospital. Doctors at the hospital said what I already knew. They declared her brought dead”, he says.

Ghulam Muhammad Bhat, the uncle of Parvaiz, adds that they were eight family members in the room. “We were all sitting together. We didn’t even come out to feed our cows since the encounter started. I asked my niece to get some water so that I could take medicine. She had the baby in her lap. As she handed me over a glass of water, we heard firing shots. She fell down on my lap saying something has hit her. I consoled her that nothing has hit her. And within seconds she was dead”, Bhat says. He points towards several bullet marks on the brick wall and the window of the house saying forces intentionally fired toward his house.

In the encounter two militants, Tanveer and another foreign militant Ali Bhai were killed. An army soldier and a policeman of the special operations group (SOG) also sustained bullet wounds. Several dozen civilians were injured in clashes with government forces and 11 of them sustaining pellet injuries.

The Jammu and Kashmir police say the woman died in "crossfire" between the forces and the militants.  J&K chief minister Mehbooba Mufti expressed grief over “the death of a young girl during a search operation.”

“It is very unfortunate that a web of violence has been cast in which the local and innocent civilians of the state have been caught,” Mehbooba said, adding, both civil society and the government have to work together to end this cycle of violence in the state.

At the house of Tanveer Ahmad Bhat, in Wanpora, around half a km from the encounter site, a banner of Tanveer holding AK-47 has been placed on the front side of his house by local youths.

His father, Ghulam Nabi Bhat, was in a tent house.  He says on September 27 last year his son left the home after helping him out in the apple orchid during the day.

“He didn’t come back in the night. I thought he might be with friends. Next day when the phone started working I called him. He responded that he will be back in five minutes. The five minutes never came. I only saw his body on Tuesday,” he says.

Since September last year, the father has been to different encounter sites, to the funeral procession of militants, looking for his son, who had joined Jaish-e-Muhammad outfit. But he couldn’t find him anywhere.

“Had I located him anywhere I would have brought him back. He was my only son”,  Ghulam Nabi says and cries. Tanveer was the only militant of the village.

Beauty Jan was the third civilian killed this month during the encounters. Last week, Misra Bano, mother of an eight-month-old girl, was killed in alleged in the army firing in frontier Kupwara district. The police said she died when she was trying to flee during an encounter in which three Lashkar-e-Taiba militants were killed.

On Saturday night, a Sumo driver, Asif Iqbal Bhat, was killed allegedly by the army outside his home when he was about to start his vehicle to ferry a family to a hospital.

According to his family, he was killed, soon after he started his vehicle. The army initially said it was a case of mistaken identity. The police, however, blamed "cross-firing" for the young driver's killing. The police also filed FIR in the case and the government has initiated a magisterial inquiry. The magisterial inquiry has to be completed within 15 days.