A Momentary Lapse Of Reason

We may spend a lifetime and more in trying to discover what snapped on the night on which Zidane combined the calm of the Buddha and the agility of the samurai with the instinct of a streetfighter. Sometimes, just sometimes, we are left clinging to sporting images that we would rather forget. It is a good wager that the Zidane head-butt from the FIFA World Cup 2006 final has dominated discussions throughout Monday. Why would Zinedine Zidane who displayed the calm of the Buddha and the agility of a samurai blow it all in those charged up final moments? Why would a hero want to wear the tag of villain on such a big stage?

What is it that caused the French captain knock Italian defender Marco Materazzi over with just over than 10 minutes left for the match to spill over to penalty shoot out? Someday in the future, Zidane will explain what really made him lose his cool and head-butt Materazzi, but until we hear from the Frenchman himself everything else will be in the realms of speculation.

There have been suggestions that it would have taken no less than a racist comment by Materazzi for Zidane to do what he did – walk back towards the big Italian defender and head-butt him in streetfighter style. Zidane would have left the stamp of genius on the World Cup legend, making mothers want their sons to take after him for his gifts and impeccable behaviour, but his bizarre final act will have made them think again.It can only be hoped that Zidane does not have to wake up too often, breaking into cold sweat with Materazzi’s voice and images haunting him. The Zidane legend surely deserves better recall than a silly and despicable head-butt. His dribbling and passing skills, with his instinct for laying the ball at the feet of an attacking team-mate, have rarely been matched and it must be remembered that he was one player whose personality was not overshadowed by his coach.Indeed, the World Cup was a competition where coaches and their strategies held centrestage, with football increasingly resembling basketball where I believe coaches play a chess game with the players as their pieces on court. And while we will remember it for great moments of magic, including some that Zidane scripted, he also gave us something stark and dark to remember it for.

Ironically, a few hours before the final was due to kick out, a friend called and waxed eloquent about Zidane. We discussed how the 34-year-old magician with feet for a wand retained his composure through thick and thin. We discussed his calm, unexcited eyes that we got to see at the end of the big games against Spain, Brazil and Portugal when he changed shirts with rival captain Figo. 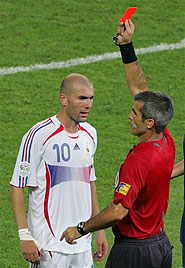 Yet, the tragic twist to his World Cup tale should not make him a villain. Zidane’s craft was there for all to see and France’s run to the final was scripted with him as the pivot. There were not too many takers for France at the start of the tournament and it was not until it made the second round that it began looking like the time that had won the World Cup eight years ago.We have learnt to remember sporting heroes for their genius and their acts of valour rather their impulsive moments of madness. The provocation must have been grave for Zidane to react in the manner he did. He was not the first football player to head-butt a rival, nor will he be the last. But one doesn’t cite that here to condone his deed. Nor is he the only sporting icon to have misbehaved on the big stage.Why would that tennis genius answering to the name of John McEnroe scream at the umpire at Wimbledon? Why would a masterly batsman called Sunil Gavaskar suddenly want to stage a walkout from a Test in Australia on being given out? At the core of every supreme sporting achiever lies a simple human with a wide of range of emotions, the darker side surfacing at the worst possible moments.

Such questions remain unanswered. And in this case, we will have to wait for time – and Zizou – to provide us the answers. Then again, like many mysteries of life, we may spend a lifetime and more in trying to discover what snapped on the night on which Zidane combined the calm of the Buddha and the agility of the samurai with the instinct of a streetfighter.