Are we going to see a non-left party, raise the class question in Indian politics? 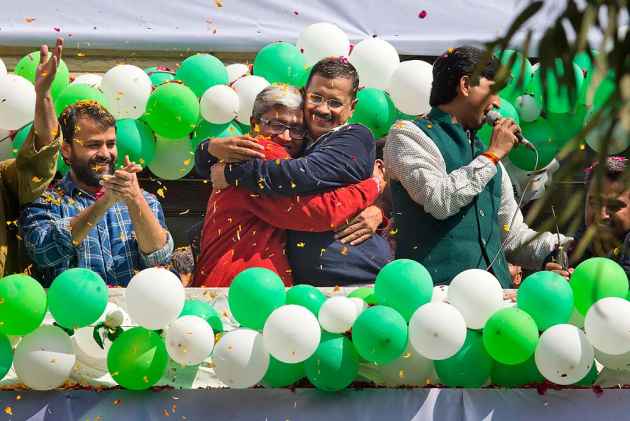 Even as results of the Delhi elections started pouring in, Yogendra Yadav said on a television channel, that the politics of Aam Aadmi Party has facilitated a rise of class politics with a radical deviation from its Marxist roots: Without going through the necessity of, or without the logical means of – a class struggle. It is a statement that is bound to interest and raise volatile debates among political theorists and others who follow Indian politics.

What does Yadav's statement really mean? That it is possible, under certain democratic conditions, to address the questions of class politically and bring up their concerns into the political mainstream without having to go through the logically deemed necessity of a class war or antagonism? The question that would be asked next is: Can a bourgeois state deliver class concerns despite its rhetoric?

The bourgeois state in India and its bourgeois governments have never acknowledged and legitimised a politics of class in its vocabulary. It has always been, since the days of the Congress to the present government, the politics of the "poor". Using the oldest category of economic and social denomination, "poor", a category now lacking agency and a strict political identity, every government with vulgar repetition has managed to use the rhetoric of the "poor" as a passive category in need of doles, and obfuscate the real and concrete question of class and conflicting class interests.  So when it came to feeding the populace with economic promises, it was always restricted to feeding the necessities and hopes of the poor.

The vague, demographic term of "poor" enabled all the non-left political parties in India to steer clear of addressing specific concerns of workers and peasants and looking after their interests. The politics of the working class was totally shifted (and relegated) to a juridical arena, where labour laws would take care of the workers. The only politics workers were allowed was within the framework of trade unions. The question of class as an overarching political category at the heart of Indian politics has been absent. It is certainly missing in the ideological framework of all non-left political parties and its governmentalising bodies.

So is something going to change in the light of Yadav's remark? Are we going to see a non-left party, raise the class question in Indian politics? Removing or bypassing the idea of a class struggle would mean a promise that democratic politics has the potential to facilitate class concerns by improving the conditions of the working class and thus reducing antagonism between classes in the social sphere. Is such an elevation of the workers' conditions of life and work, possible?

These questions will demand concrete answers from the AAP in days to come. It will mean addressing labour laws, questions relating to relations of production, labour time, wages and ownership of products. There is also the important question, impossible to overlook along with these fundamental issues, the easy criminalising of protesting workers in corporate sectors. All this will mean, empowering the working class with secure political rights as much as granting them a better deal in their working conditions.

The next question would obviously be: Can these changes be possible without a historical challenge against the basic ideology of capitalism and its exploitative structures? Is democratic politics a euphemism for a peaceful, stage-wise change in class relations? What does it do and where does it leave the question of capitalism?

The AAP has so far shown an inductive approach to the question of class politics. In their bringing together common concerns of the daily lives of the underclass and lower middle class in Delhi, they have earned a reputation of being serious representatives of those classes. These classes include everyone from migrant workers, people from so-called ‘un-authorised' colonies, auto rickshaw drivers, etc. The inductive approach to politics also means not addressing social concerns through already laid out theories of politics, but rather learning of these concerns through the everyday interactions with the people.

There is no privileging of theoretical blueprints and a priori, coherent frameworks of understanding people's needs and interests. There is no teleological theory of history, freedom or the future to endorse or establish. This is a kind of democratic politics that allows newness and innovation.

Those asking larger questions regarding capitalism and larger structures of exploitation can well have to answer a counter-question: Can questions regarding the daily needs and aspirations of a worker's life, only be framed within historical questions to which no one has an answer yet? And what if, through the space created by politics for workers in the social sphere, that we find new modes of politically addressing important questions of political space and visibility of workers within the life-world as a whole? What if we find workers are allowed to protest freely in the streets of Delhi like middle-class agitators? Perhaps workers will then need less of vanguards as they do now, who often represent different shades of a self-fashioning bourgeoisie fighting for workers rights with abstract goals like revolution in mind.

To then seek a possible meaning to Yadav's assertion, perhaps the politics of class interests or class politics within a democratic framework would mean people of the underclass asserting their rights and enjoying a wider space of political legitimacy within given the economic structure. For this politics to appear, one doesn't need to solve larger questions related to the machinations of capitalism. Perhaps it is a direction towards bringing in class politics through a democratic idiom and transforming the language of democratic politics. This might force other political parties to include the class question in their political agenda and rhetoric. That would itself be a huge gain in a long battle of working class politics to gain mainstream legitimacy.

Whether the politics of democracy co-opts this politics and blunts its potential in other ways will remain a concern. But for now, it is perhaps time to register and acknowledge the fact that workers need something less hazardous than revolution. Defeated cynics in the left will call it a democratic hogwash.

A poet and political science scholar, Manash Bhattacharjee, has contributed to Guernica, Huffington Post, EPW, The Hindu, etc. His first collection of poetry, Ghalib's Tomb and Other Poems (2013), was published by The London Magazine. He is currently Adjunct Professor in the School for Culture and Creative Expressions at Ambedkar University, New Delhi.