A Place To Hang Your Art

While it is too early to proclaim the divide between the arty-ratti and the aam-public extinct, there is a start in that direction.

So, this is Delhi in the early 21st century: around the small courtyard of a refurbished old house which jostles with other unrenovated houses, is a crowd of people craning their necks; in the courtyard itself there is a bunch of people trying to tie up a naked man; the man is Chinese, with a gymnast’s compact body, and he is suspended on a plank above a ‘dome’ made of wire mesh and jute, and what the people around him are trying to do is to string the guy up from his feet and hands and then remove the plank from under him so’s he can hang above the dome like a human hammock, suspended between a tree and a pillar; the Chinese man mutters guttural instructions to a Chinese woman friend who then transfers these to another, Indian guy, presumably in another Chinese dialect, after which the Indian man yells to the workers hoisting the Chinese man: ‘Dheerey sey! Thoda aur upar! Itnaa nahi, thoda neechey! Ab zor sey baandho!’ 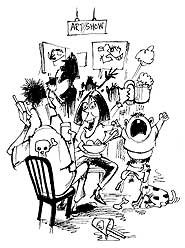 The audience is large for the space, about a 100-odd people crammed around the courtyard and on the connecting terrace above, all examining the raw produce from Peking. ‘What do you think?’ I ask the sculptor from Newcastle who’s just bummed a rollie off me. "Every man here is comparing himself to that bloke." "What about the women?", I ask, but before he can answer he disappears in the crowd. Later, I ask a female friend. "Well, you couldn’t see much in that light, could you?" she replies.

By then, we have been wrung and knotted by the sweaty crowd, having walked into four or five different acts which are the results of the Workshop which has just ended, the different works produced by artists from Israel, Brazil, our man from China, a New Yorker, and sundry Indians. Thanks to Khoj, contemporary Performance Art is alive and well, hog-tied and suspended in Khirki Village, New Delhi.

The audience was itself a moving, chaotic, semi-rioting, work of art, with college students, professional arty-ratti and locals from Khirki all climbing over each other, catching the different installations/performances between bites of pakoras and gulps of beer and cola. Two or three things were made clear from the Khoj Performance evening. One, that among the general janata milling around looking confused were a lot of people genuinely interested in what was going on, people who weren’t bothered whether oil-paint and drawing dexterity had gone into the work (all, except two Bong ghosts from the Academy of Fine Arts in Cal, who were going on about how there was no ‘aanka’ to be seen anywhere). Two, that Delhi, of all Indian cities, is fast reaching the stage when the ‘off-season’ for art shows will shrink to a couple of the most unbearable summer months. Three, while it is too early to proclaim the divide between the arty-ratti and the aam-public extinct, there is a start in that direction. Especially if the eager eyes of the three muhalla girls peeking down at Peking from the terrace next door are anything to go by.