A Precious Gem From The Archives

A film clip of the historic China visit in 1983 by a high power delegation of the CPI(M) throws light into a landmark period under the tallest Asian Communist leaders- EMS and Deng Xiaoping. 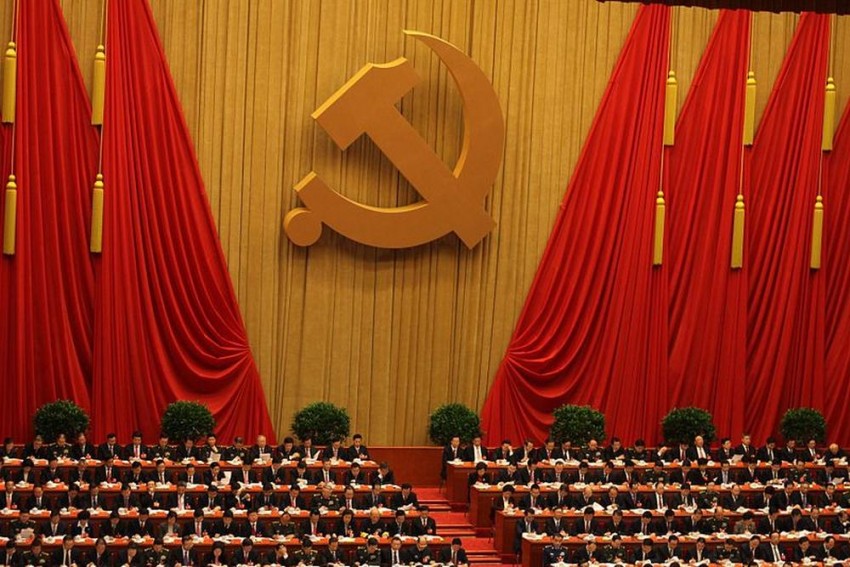 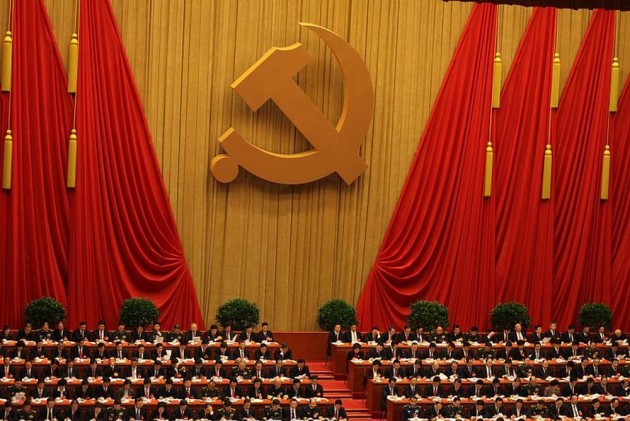 Exploring the internet world for old images and vintage clips has been my favourite passion for some time now. Treasure-hunting through various archives has often helped me 'discover' a lot of rare and precious gems. One of such recent discoveries was a detailed film clip of the historic China visit in April, 1983 by a high power delegation of the CPI(M) consisting of the then party General Secretary EMS Nampoothiripad, Politburo members M Basavapunniah and Harkishen Singh when they meet with top most Chinese leaders like Deng Xiaoping and others. I don't think many in India must have come across this historic visit.

The CPI(M) delegation's visit was the first after the snapping of ties between them and the Chinese Communist Party (CPC) following the outbreak of the Naxalite movement in India and also the Leftward shift of the CPC. Those were also the early days of opening of the new chapter in China's history with the takeover of the CPC and government by the reformists led by Deng Xiaoping after a long and violent struggle against the disastrous Cultural Revolution led by Mao Tse Tung and the ultra- Left 'Gang of Four'.  The reformists led by Deng had finally triumphed after long years of persecution in the struggle with Mao's death in 1976.  After the reformers' takeover the Gang of Four led by Mao's widow Jiang Qing, a former film star, was tried for treason -televised country wide-and imprisoned for life. By 1982 Deng had become the paramount leader assuming the office of the Chairman of the Central Advisory Commission of CPC. Qing, who unlike others had remained unrepentant and defended whatever she did, committed suicide in 1991 at the age of 77 by hanging herself inside the bathroom in a hospital where she was admitted for throat cancer.

In the first part of the clip the Indian delegation is being received by Chinese party general secretary Hu Yaobang. Here EMS is heard reminding Hu that he was an old friend of Chinese party (CPC) and that he had attended the CPC's 8th Congress. Quite striking is the candidness of both the sides and of course EMS's famed penchant for repartee. When Hu congratulates him for restoring the snapped ties between both the parties, EMS doesn't wait a second to return the compliment promptly; "We should congratulate you too..". Clearly he was suggesting that the Indian party alone should not be held responsible for the break in ties! Hu tells EMS that both the parties had very friendly relations for a long time and they should not have been severed. "It is "nightmare that is past now" is EMS's reply. Further the Indian veteran shoots a direct barb; "During the past 4 days we are here, we have heard what happened to many comrades here in China. So what happened to us (relations) is part of that ! " He was pointing at the days of Cultural Revolution when Left wingers had virtually wiped out most of their moderate rivals calling them "Capitalist roaders". EMS was also reminding that CPC's dumping CPI(M) for wooing the Naxalites was a mistake committed during it's days of "Leftward lurch".

Basavapunniah who was one of the most pro-China leaders in CPI(M) and even known to have some sympathy for the Naxalites, is seen particularly happy when he meets a Chinese leader whose identity is not clear. He is seen embracing him and recalling that they were meeting 23 years after they met at Bucharest. "I used to anxiously follow what happened to you during the Cultural Revolution!".  According to journalist and author N P Ullekh, this tall big Chinese leader was Peng Zeng who was also among those key leaders rehabilitated by Deng after the end of Cultural Revolution. Peng, once a prominent Mao loyalist was in the all important five member committee appointed to implement Cultural Revolution. But he later fell out of Mao's favour and got marginalised like all who differed with Mao. Many had thought that Peng was among the nearly 40,000 party members and leaders of the CPC who had "disappeared" or killed for being "Capitalist roaders" during Cultural Revolution. Obviously, Basavappunnaiah had reason to be anxious. Their previous meeting that he was referring to was the International Conference of World Communist Parties held at Bucharest, Romania in 1960 where the deep ideological differences between the two Communist parties of Soviet Union and China came to fore. Soviet Prime Minister Nikita Khrushchev and Mao had fought bitterly against each other at the conference.  Peng was one of the Mao loyalists who too had lambasted Khrushchev at that conference. Basavapunniah, a bitter critic of Soviet party after it disowned Stalin, must have become an admirer of Peng at Bucharest ! 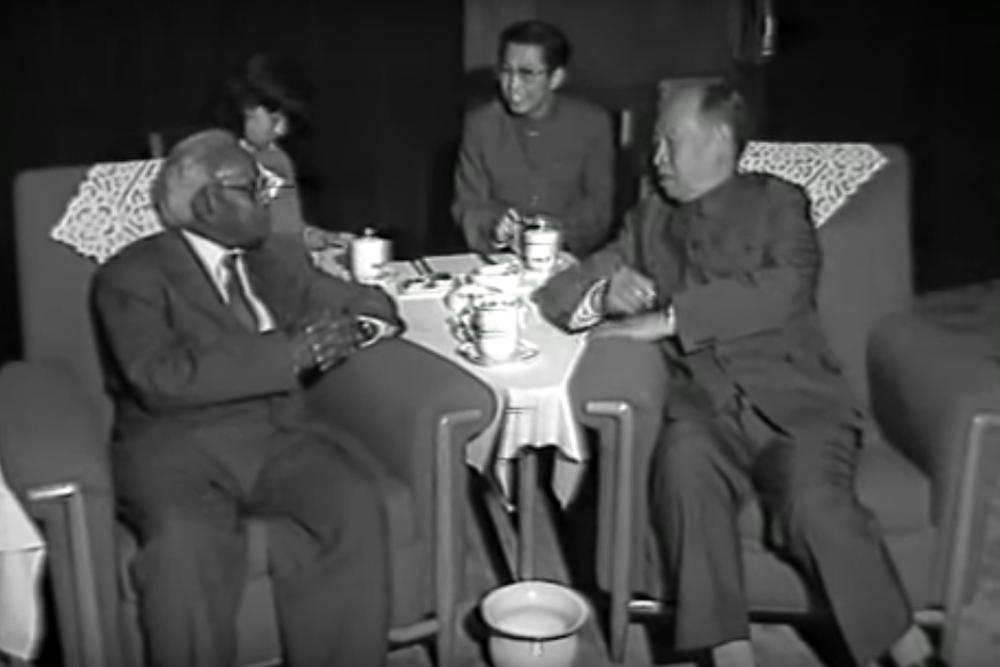 The climax of the Indian team's visit was its meeting with China's strong man Deng Xiaoping. Deng congratulates EMS for the discussions the Indian delegation had with CPC Gen Secry Hu. "I read the minutes of your discussion. Very good talk..." Deng continues; "In the past we (Chinese party) had failed to understand many things. Now we realize and understand many things though not in full yet...Revolution in any country can be conceived by the people of that country alone..no outsiders should intervene for they are not familiar with the conditions of that country like the comrades there would be. Chinese comrades are not familiar with the conditions in India like you are...relations between our parties were severed. But we are not responsible for that...the "Gang of Four" was responsible....".

Then at the banquet hosted by Deng, EMS stands up and speaks. "We congratulate Comrade Deng for the struggle he waged against Leftism..we in India still have to struggle against both revisionism and Leftism. We therefore have have special regard and respect for Comrade Deng. I wish him good health and long life..."

Those were early days of the phenomenal economic revolution launched by Deng that later transformed China.  Though many critics even from the Left had called the reforms as unabashed Capitalism with Socialist facade, EMS and CPI(M) until recently had backed the Chinese reforms as the party's continuing attempt to build Socialism with Chinese characteristics. But with passage of time when Chinese Market Socialism increasingly began to look identical with pure Capitalism, CPI(M) turned slightly sceptic. The ideological document, presented by CPI-M passed at the 20th Congress of the party in 2012 said that "negative tendencies" like economic inequalities, unemployment, corruption and nepotism have surfaced in socialist countries including China, who have embarked on a course of reforms to meet the challenges of present-day world realities.  It also warned that International finance capital's presence in China is out to destroy Socialism there.

The clip carries many other interesting asides too. Deng's offering cigarette to EMS which he politely refuses; Deng saying apologetically that he had to smoke; the ceremonial rounds of drinks (should be the famed Baijiu, Chinese rice-based alcohol) when the Indian veterans unfamiliar as they were with this custom, clumsily clinking their glasses; EMS's sprightly physical movements in contrast to his difficulty to walk during the last decade of his life. And lastly, I have watched Deng with awe.. chain-smoking, not very healthy-looking and ageing even at that time who had lived for 14 years more until he became 93 to transform China into a super power !

EMS, five years younger to Deng, died one year after in 1998. While Deng transformed a Communist country for the first time to a super economic power, EMS's contribution too was no less significant. For, the party which he founded and nurtured is the world's only Communist party that showed (with all its warts) how to function as a major player (unlike the Communists in other democratic countries) within parliamentary democracy for more than 70 years.

Salute to two of the tallest Asian Communist leaders of our lifetime.

(The author is Editor, Asianet News)