At most, a replacement will be brought in so that Finance Minister Arun Jaitley carries a lesser burden. 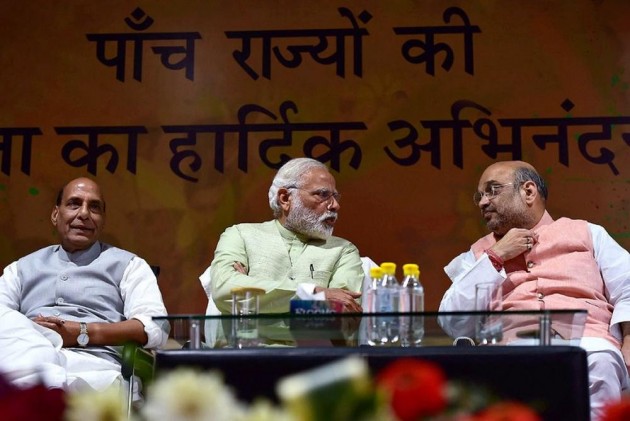 A reshuffle in the Narendra Modi cabinet may happen at the end of April, if at all, keeping various permutations and combinations in mind. A re-jig in the middle of the current Parliament session, ending on April 12, will not happen.

As in the past, there is no official confirmation on whether a reshuffle will happen at all and whether it will be a big reshuffle or a small one and when.

Many issues will be kept in mind before the re-jig is put in process, including party affairs. Elections for the post of President of India and the Vice President are due in the middle of this year. President Pranab Mukherjee’s last day in office is July 25 and Vice President Hamid Ansari is August 10.

It is not only the 2019 general elections but elections in some of the BJP states prior to that which will also be considered before a final decision is taken.

Besides, two of the party spokespersons, Shrikant Sharma and Siddharth Nath Singh, have become UP legislators in the recently concluded UP assembly elections. Their replacements will also have to be found. So a combined effort is likely to happen and not in piecemeal.

Speculation is rife whether Modi will tinker with his top four ministers in Home, Finance, Defence and External Affairs. However, it is likely that he will not touch any of them. At most, a replacement will be brought in so that Finance Minister Arun Jaitley carries a lesser burden.

Since the time former Defence Minister Manohar Parrikar was named the Goa Chief Minister, speculation was rife that another re-shuffle would take place. But there has been no official confirmation on the issue.