Evidence suggests that a small group of ultraconservative Salafis may have hijacked protests over an obscure, anti-Islamic film and orchestrated attacks on US embassies 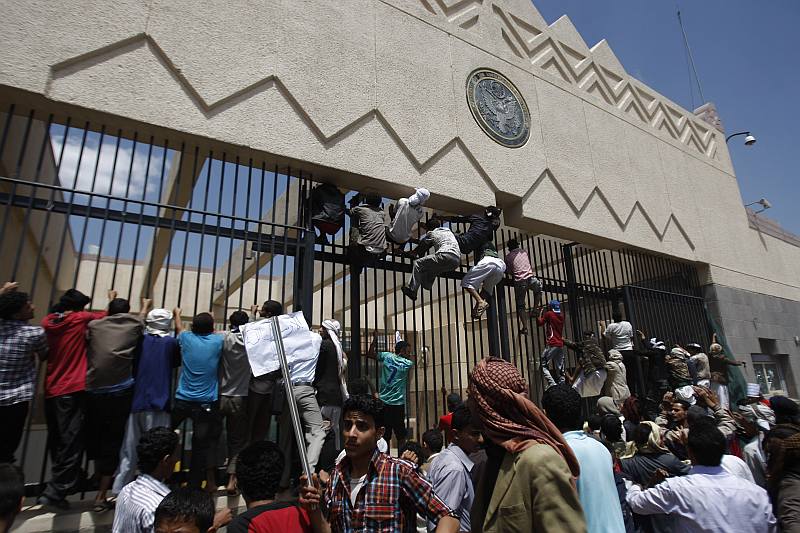 More stories from Fawaz A. Gerges
View All

There’s increasing evidence that the attacks against American diplomatic missions in the Arab world have more to do with internecine battles than anger against a sacrilegious film clip. The attacks in Egypt, Libya and Yemen were spearheaded by ultraconservative Salafis, to gain political advantage over mainstream Islamist rivals, such as the Muslim Brotherhood. The challenge for the US and the West is not to fall in this Salafist trap.

After the ouster of Arab dictators, a fierce political struggle continues over the identity of the Arab state among religious-based and liberal-minded activists, a clash playing out on multiple levels. The Salafis are spearheading a drive to institute Islamic law or Shariah, desperately trying to outbid mainstream Islamists who recently won parliamentary majorities in Tunisia, Egypt and Morocco. The film provided the Salafis an issue to exploit on a platter..

Evidence suggests that the attack on the Americans in Libya was calculated, carried out by a small Salafi-Jihadi group called Ansar Al-Shariah, an Al-Qaeda-like outfit. Ansar Al-Shariah apparently infiltrated relatively peaceful protests and struck the US consulate, killing the ambassador and three employees.

The Salafis have become the wild card in almost every Arab country. Although most do not use violence, a small but potent segment called Salafi-Jihadis subscribe to Al Qaeda’s extremist ideology and tactics. Factions threaten to plunge Libya, Yemen and Egypt into instability.

With the killing of four US officials, foreign policy has at last intruded into the presidential campaign, previously dominated by domestic concerns, particularly a weak economy. Complexity of the situation was missed. Seizing the crisis as political opportunity even as the protests were underway, Republican Party nominee Mitt Romney criticized President Barack Obama's response as apologetic and "disgraceful." Obama accused his challenger of having a tendency to "shoot first and aim later."

Romney has sharply criticized the president’s foreign policies, particularly in the greater Middle East. He has charged Obama with failing to lead on the world stage, supposedly making Americans less safe. The premise underlying Romney’s rhetoric is that Obama is an apologist for America’s enemies, that he has weakened the country’s global leadership.

For example, Romney asserts that re-electing Obama would result in Iran having a nuclear weapon, without offering a different strategy. Romney’s key difference with Obama is that he’d give Israel carte blanche to do what it pleased, implicitly implying that he’d back an Israeli military strike against Iran.

Romney accused Obama of showing his hand to the Taliban by announcing a timeline for withdrawal of US troops from Afghanistan, but also claims to accept the 2014 time line.

Despite such accusations, opinion polls show that a plurality of Americans still trust Obama to do a better job handling international affairs than Romney.

In reality, Obama has not departed from the Washington foreign-policy consensus. His approach is consistent with that of moderate Republicans, thus neutralizing Romney’s ability to gain political advantage. Obama has reversed some of the worst ideological excesses of his predecessor, only bringing the United States back to a cautious middle.

Obama seized on Americans’ desire to see the country move away from militant unilateralism and return to the traditional multilateralism in international affairs that had steered the nation through the first decade following the end of the Cold War.

Obama has gradually reduced the military presence in the Middle East. By bringing US troops home from Muslim lands, Obama aims at deactivating the minefields that almost brought ruin to America’s relations with the region.

Treading lightly, he doesn’t want the US entangled with the Middle East’s raging conflicts. He and his foreign policy team admit that the United States overextended itself, suffering a colossal loss of moral authority and opportunity costs, costs that would have been better spent elsewhere. From the beginning, the Obama administration has shifted US foreign policy priorities to the Pacific region where America’s future lies, according to the president and senior aides.

In Libya and Syria, Obama exercised self-control, aware of the limits of US power in the area. Instead of taking the lead in the military confrontation against Muammar Gaddafi, Obama insisted that European powers and the Arab League lead the Libyan operation. Despite vocal criticism by Republican detractors, Obama scored political victory in Libya with restraint and a low profile.

Similarly in Syria, Obama has pushed back against military intervention, though the administration has become more involved in supplying financial, logistical and intelligence support to the rebels. US officials fear that providing arms to the rebels might fall into Salafi hands.

In contrast to his ideologically driven predecessor, Obama is not a liberal interventionist; he’s less inclined to use force to advance “causes.” With Republican critics in mind, on Memorial Day Obama promised to send US soldiers to war only when “absolutely necessary.”

While Obama wages a fierce counterterrorism campaign against Al Qaeda and likeminded groups worldwide, he has drawn down the forces in Iraq and Afghanistan. Far from appeasing Iran, the Obama administration, together with its European allies, is waging all-out economic war against the Tehran government through punishing sanctions against oil and banking sectors, including the central bank. Obama expects that these sanctions, given time, can curb Iran’s nuclear program. Obama has so far resisted Israel’s key demand that military action be taken before Iran acquires the ability to manufacture a bomb.

Although a gamble, Obama’s muscular approach to the Iran has exacted a heavy toll on the Iranian economy. To call Obama’s position towards Iran and his policies in the greater Middle East “appeasement” is patently false. His opponent is either posturing for political advantage or engaging in policies that would border on reckless endangerment.

The lid is off the Arab authoritarian order, four dictators have fallen, awakening new political groups and opposing forces throughout the region. If history is a guide, it may take a decade or so for the dust to settle on unfolding political struggles in the Arab arena.

In the meantime, political turmoil and contestation will be a recurrent feature in Arab regional politics. The challenge facing US foreign policy – not confusing the Arab Spring with small radical factions such as the Salafis, who desperately try to spread their influence. Although aggressively attempting to gain control of popular anger and frustration, the Salafis are a small element. It would be a mistake to lump them together with the majority of peaceful protestors.

With American troops soon out of Afghanistan, the Obama administration is well positioned to play a key role in assisting Arab countries to transition to democracy. Washington should keep its cool, a sense of balance and perspective, with no knee-jerk reactions, as the Arab masses freed from years of oppressive control find their voice. Maintaining economic and political cooperation with appreciation of the sensitivities of new nationalism and identity politics is key to transforming US-Arab relations from suspicion and hostility to cooperation. Since his inauguration, Obama has had to clean up the damage caused by the Bush administration's failed policies. It’s not surprising that his failures have been more apparent than his successes in damage control.

But the test of this president is whether or not he can realign US foreign policy with progressive and democratic voices in the region, making a structural investment in improving people’s lives.

Fawaz A. Gerges is a professor of international relations at the London School of Economics, where he directs the Middle East Centre. His book Obama and the Middle East: The End of America’s Moment? was published in May. Rights:Copyright © 2012 Yale Center for the Study of Globalization. YaleGlobal Online