A Sizzling Summer Ahead

Kashmir is on the boil once again after the alleged rape and murder of two women in a southern village, frustrating the Omar Abdullah government and threatening a replay of the agitation unleashed last year over the Amarnath land row. Kashmir is on the boil once again after the alleged rape and murder of two women in a southern village, frustrating the Omar Abdullah government and threatening a replay of the agitation unleashed last year over the Amarnath land row.

The bodies of Nilofar Jan, 22, and her sister-in-law, Asiya, 17, were found on Saturday, May 30, on the banks of a stream near Shopian town after they had gone to collect fodder from the fields. Locals allege they were raped and murdered by troopers from a nearby paramilitary camp after they went missing on Friday. Police however says the bodies bore no marks of sexual assault and the women had probably drowned. But the stream was too shallow for that, locals argue. Nilofar was three months pregnant.

The incident has outraged the valley all over again, as people responded to separatists' call and took to the streets, just like the 2008 summer agitation, to demand azadi. Nearly 400 people were injured in clashes with the police in the first four days of protests. The killings have given the separatist groups an opportunity to hurtle back to the centre stage. Both, the moderates as well as hardliners are working hard to replicate the Amarnath land agitation. That the death of the two women followed close on the heels of the killing of a young protester in old Srinagar and a man in police custody is another reason for public outrage to spill out on the streets. 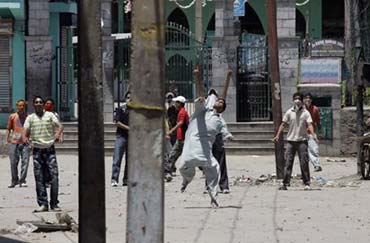 Moderate Hurriyat chairman Mirwaiz Umer Farooq has already threatened to launch a renewed agitation if New Delhi doesn’t launch a "serious and substantive" effort on Kashmir. Hurriyat hawk Syed Ali Shah Geelani, on the other hand, has started making noises about the soon-to-start Amarnath yatra. He wants curtailing of the yatra duration which, he says, was enhanced, with a political design, from 15 days to two months by former governor S K Sinha.

The Shopian incident has come at a time when the government was patting itself on the back for the huge arrival of tourists. Until last week, 16 flights arrived in Srinagar daily, while the famed Dal lake presented a carnival atmosphere. In fact, a trip to the valley from New Delhi was more expensive than a holiday abroad. The minimum cost for a one-way ticket from Delhi was Rs 14,000, prompting Chief Minister Omar Abdullah to request civil aviation minister Praful Patel for additional Indian Airlines flights to keep airfares under check.

Around 4,000 tourists, including some foreigners, arrived in the valley every day. And once the Amarnath Yatra begins from June 15, the government had hoped that the number of visitors would better all records this summer. Indeed, such was the tourist rush that even Geelani and JKLF chief Yasin Malik had to chip in and urge the "Indians to come to the valley freely" because, he said, "our fight is not against the people of India."

But sadly for the Omar Abdullah government, the Shopian incident has been a spoilsport. Tourist buses have been attacked by angry protesters in some places, forcing them to pack up. The number of arrivals too has fallen sharply. "If the turmoil continues the number of arrivals may come to a naught," says Aziz Tuman, chairman of the Houseboats Owners Association of Dal lake. "The government has to rise to the occasion."

In a desperate attempt to cool the tempers, chief minister Omar Abdullah has ordered a judicial probe into the deaths of the women. "The situation has reached a point that even if we conduct an impartial inquiry, people will not accept it," Omar said. "To restore the credibility of the government among people, I have ordered an inquiry by a retired judge. My government will ensure that the guilty is not spared." Separatists have however rejected the judicial probe as an eyewash. They demand one by the Amnesty International and Kashmir High Court Bar Association.

Adding to Omar’s problems is opposition Peoples Democratic Party (PDP) whose president Mehbooba Mufti is out to make political capital from the Shopian incident. On June 3, Mehbooba and her party legislators staged a protest demonstration at Srinagar’s Lal Chowk where even azadi slogans were heard.

Says Riyaz Wani, a journalist with Indian Express, "With all the ingredients of the potentially troubling inputs, Kashmir's political summer looks set to be sizzling one. That is, if the National Congress-Congress coalition does not wake up to the new unfolding reality and takes remedial measures."