A Tide Of Terror

Despite the geographical spread of various incidents, and the firepower expended or recovered, this is barely the tip of the iceberg of Pakistan sponsored Islamist terrorism in India. 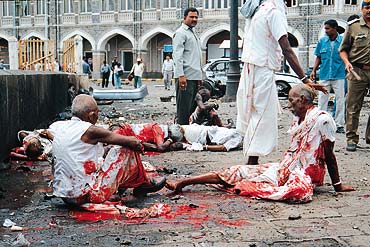 OPINION
A Tide Of Terror
Despite the geographical spread of various incidents, and the firepower expended or recovered, this is barely the tip of the iceberg of Pakistan sponsored Islamist terrorism in India.

For years now, the Institute for Conflict Management has built the case that the conflict in Kashmir is not about Kashmir; that it reflects, rather, an irreducible conflict between the ideology of religious exclusion and hatred that underlies the creation, existence, politics and strategic perspectives of Pakistan, and India's secular, pluralistic democracy; and that it has, at its heart, objectives that go far beyond the apparent territorial dispute over Kashmir, and those are intrinsically linked to the current 'global jehad' by a wide and interconnected network of Islamist terrorists.

The dramatic succession of incidents, arrests and seizures over an extended geographical area across India in the seven days past, virtually encapsulate the broad underlying dynamic that fuels the Islamist extremist jehad in South Asia, and its roots in the ideological and political pathology that lies at the core of the Pakistani state.

The week began with by far the worst of these incidents on August 25, in Mumbai, India's financial capital, where two coordinated bomb blasts killed 52 persons and injured another 148 in the vicinity of the historical landmark, the Gateway of India and at the crowded Zaveri Bazaar. While definitive identification of the perpetrators is still to come, forensic patterns and recent history - at least five similar explosions have occurred in different parts of the city since December 2002 - point the finger at cadres of Pakistan-based terrorist groups, particularly the Lashkar-e-Toiba (LeT), and their local affiliates, the proscribed Students Islamic Movement of India (SIMI) and the Kashmir-based militant Islamist women's organization, the Dukhtaran-e-Millat (DeM).

Hours after the blasts, more than 100 detonators were found inside a railway tunnel at Ghatandevi near Igatpuri, approximately 60 kilometers from Nashik in Maharashtra, just an hour before an express train carrying a large number of pilgrims was to pass.

On August 27, while the Inter-State Council was meeting at Srinagar, with several Chief Ministers and Union Cabinet Ministers in attendance, and presided over by Prime Minister Atal Behari Vajpayee, two terrorists entered Hotel Greenway - under three kilometers away from the venue of the Council - and engaged in an exchange of fire with the security forces (SFs) for approximately 12 hours. The encounter ended during the early hours of August 28, with five persons - including the terrorists - dead and an unspecified number injured. National Conference leader Javed Shah, a former militant and legislator, was among those killed. Al-Mansooran, a front organization of the LeT, claimed responsibility for the incident.

On August 30, acting on a tip-off, the Border Security Force (BSF), engaged with two terrorists - including, crucially, Shahnawaz Khan @ 'Ghazi Baba', the operational chief of the Pakistan based Jaish-e-Mohammad (JeM) in the Noorbagh locality of Srinagar. Three persons - including a BSF soldier and the two terrorists, were killed, though the JeM has claimed that Ghazi Baba was not among the dead. [Please also see the BSF claim - Ed]

The operation is extraordinary in its significance, and could mark the unraveling of an India-wide terrorist network directly controlled by Ghazi Baba, who was one of the key accused in the attack on India's Parliament at Delhi on December 13, 2001; the attack on the Jammu and Kashmir Legislative Assembly on October 1, 2001; the Akshardham Temple attack in Gujarat on September 24, 2002; the hijacking of IC 814 on December 24, 1999; the 1998 massacre of 25 Kashmiri Pandits (descendants of Hindu priests) at Wandhama in Anantnag, Kashmir; the abduction of six Western tourists, one of whom was beheaded, and another four of whom are yet to be traced and believed dead (one American tourists managed to escape), by the Al Faran in July 1995; and a succession of high profile fidayeen (suicide squad) attacks on security force establishment in Jammu & Kashmir.

On August 30, again, two terrorists - a Pakistani and a Delhi resident - of the JeM were killed in an encounter at the Indraprastha Millennium Park in Delhi. The encounter occurred after the Police had intercepted a truck containing a large quantity of explosives, arms and ammunition, including Under Barrel Grenade Launchers, from a truck, and arrested three terrorists. On interrogation, the arrested terrorists had disclosed that the weapons and explosives were intended to engineer major incidents in the capital, and that they were to be received by the terrorists at the Millennium Park. In another incident on the same day, the police found 148 sticks of gelatin explosives at the New Delhi railway station in an unclaimed bag.

In follow-up operations after the Delhi arrests and encounter, further arrests of two JeM terrorists took place in Bulandshahr in the State of Uttar Pradesh on August 31. 23 electronic detonators and three remote control devices were also recovered in this incident.

Despite the geographical spread of these various incidents, and the firepower expended or recovered, this is barely the tip of the iceberg of Pakistan sponsored Islamist terrorism in India. In the wake of the Mumbai blasts, a great deal of poorly informed 'analysis', both in the Indian and the international media, sought to link the incidents to proximate triggering events - including, among others, the Gujarat riots last year, and the disclosure of a report by the Archaeological Survey of India, on the very morning of the twin explosions in Mumbai, which claimed that a 10th Century Temple lay under the foundations of the disputed Babri Masjid (mosque) site in Ayodhya, Uttar Pradesh.

These analyses fail to comprehend the sheer enormity of the Islamist extremist enterprise in South Asia, the continuity of motives that underlie a long succession of incidents, and the complexity and number of cells and networks that have been established across the country to secure a sustained and subversive strategic agenda. For one thing, for each terrorist conspiracy that manifests itself in a successful operation, there are literally scores that are discovered and pre-empted.

In just the past four and a half years, since mid-1998, over 250 Pakistan-backed Islamist terrorist cells have been discovered and disrupted across the length and breadth of India outside Jammu & Kashmir. Hundreds of arrests occur, and literally thousands of kilograms of explosives and numberless weapons are seized each year. In private conversations, General Hamid Gul, the former Director General of Pakistan's Inter Services Intelligence (ISI), is reported to have recently boasted that this Agency had established at least another 300 operational cells across India, that these had been charged with the responsibility of recruitment and mobilization of local cadres, and that these could be activated on command.

Even a surface acquaintance with the motivating ideologies of the groups involved in the Islamist extremist enterprise in South Asia exposes the essential logic and dynamic of their operations. Hafiz Mohammad Saeed, the head of the LeT, for instance, writes that jehad is imperative until "the way of life prescribed by Allah dominates and overwhelms the whole world… Fighting is also obligatory until the disbelieving powers and states are subdued and they pay jizya (capitulation tax) with willing submission."

Similarly, the Harkat-ul-Mujahidin's Fazl-ur-Rahman declares, "Delhi, Calcutta, Mumbai and Washington are the real targets of militants. Muslims should cooperate with militants for dominance of Islam in the world." SIMI's manifesto rejects democracy, but resolves to exploit its processes to "expose the nature of the system, democracy, socialism, secularism, nationalism, etc., and ask the people to boycott the election and march for the Islamic revolution."

Significantly, despite the fact that SIMI draws its cadres from within India, its concerns are not integrally linked to local Muslim grievances. Of the nine major demonstrations organized by SIMI, and listed on its now-defunct website, only two related to communal violence in India. The last on the list was organized to protest the Saudi Arab Government's 1996 decision "to allow American troops to enter Hijaz (Saudi Arabia) in direct violation of the instruction of Prophet Mohammad." SIMI has integral and demonstrable links both to the ISI and a number of Pakistan-based terrorist groups, and substantially derives its inspiration from Osama bin Laden - who it iconizes as an outstanding example of a 'true mujahid' (holy warrior) and a 'champion and true savior of Islam.'

With their abiding ideological underpinnings, it must be clear that these groups are not swayed by local events, though they exploit local grievances to extend the resource pool of potential recruits. Groups like the LeT, JeM and SIMI will, consequently, continue to target India as long as they retain their capacities to strike, and as long as they continue to receive the enormous material and logistics support from, and safe-havens in, Pakistan.

While the dramatic incidents of the past week do focus attention on the enormity of the conspiracy that is being executed in South Asia, they tend to detract from the equally important 'bleeding war' that is integral to its realization. In Jammu & Kashmir alone, each month and on the average, well over 200 persons are killed in the ongoing campaign of cross-border terrorism, even as Pakistan engages in, and secures legitimacy from, the pretence of participation in a 'peace process' with India. Unless a far greater measure of realism and consistency attends the world's perceptions and assessments of the Islamist extremist enterprise, and Pakistan's unrelenting and central role in its advancement, the footprint of terror will continue to enlarge itself, not only in South Asia, but across the world.