A Tribute to Nek Chand Saini

The artist who created the magical realm called Rock Garden. 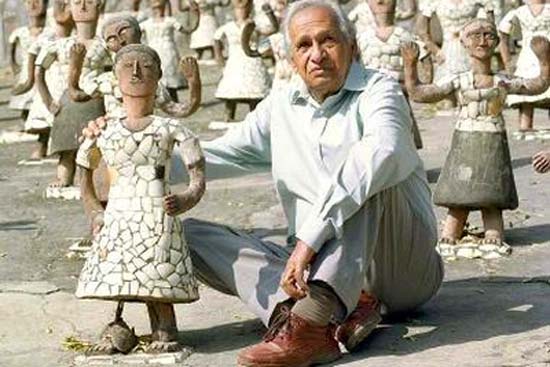 Beauty lies in the eyes of the beholder. Nek Chand Saini, who passed into the ages on June 12, was unique in that he saw beauty in what most or many people consider junk, scrap and trash. So much so he created a whole sculpture kingdom from waste materials.

The iconic Rock Garden of Chandigarh, one of the marvels of the world, is both a testimony and a tribute to Saini's genius as an artist.

The self-taught Saini toiled in secret for nearly two decades, worked dexterously on scrap and other discarded materials with an unmatched passion and created the Rock Garden that later became a top tourist attraction and made him internationally famous.

Saini's magical realm is spread across an area of nearly 40 acres. As you make your way through the narrow passages between soft-curved boulders and ranks of human and animal statues, hundreds of sculptures, including a forecourt with many chambers and a 'king's throne' greet you from rock formations, grottoes, waterfalls, canals, bridges, theaters and plazas that Saini began building more than half-a-century ago.

The Rock Garden exhibits innumerable life-like figures of a variety of animals, birds and humans. They are all fashioned out of trash and they inhabit their creator's surreal world. An arm is nothing but a piece of an old porcelain toilet bowl. A hat is actually a broken teacup.

There are houses and paths, shops and shrines, trees and vegetation that form a miniature village.

Nek Chand Saini was born on Dec. 5, 1924, in a family of landlords in Berian Kalan village (now in Pakistan) about 90 km north of Lahore. The geneses of his magnificent garden kingdom go back to his childhood when he would dream of "legends and magical realms" and "put things together".

After eight years of schooling, and matriculation from Lahore University, he came to India with his family and settled down in Gurudaspur in Punjab when Pakistan was born, in 1947.

In 1950, he got married to Kamla. They were blessed with a daughter, Neelam, and a son, Anuj.

In 1951, he was appointed a roads inspector to supervise the construction of roads of the rising Chandigarh, which was being created to reflect the independent India's first Prime Minister Jawaharlal Nehru's vision. The city was being redesigned by the Swiss-French architect Le Corbusier.

The artist in Saini discovered novel resources for his creativity in unlikely building and industrial waste. He would frequently bicycle to demolished sites around Chandigarh, river beds, forests and hills in search of old toilet bowls, broken bangles, shards of rock, attractive stones, wood, fossils, et al. Those who did not know who he was and what he was up to, thought he was a scrap dealer!

Around 1958 he began recycling these materials into his own vision of a fanciful kingdom, choosing for his work a wooded wasteland, which had been designated as a land conservancy. He would work surreptitiously at night by the smelly light of flaming tires and inner tubes. To give a distinct shape to his vision had become a mission for him. He would shun family and social responsibilities and turn down promotions.

It was not until 1975 that authorities finally discovered Saini's illegal work. By then he had already covered 12 acres with terraced courtyards filled with numerous pottery-covered concrete sculptures of animals, dancers and musicians. His creation came close to being demolished, but he managed to get public opinion on his side, and the Rock Garden was inaugurated as a public space in 1976.

In appreciation of what he had been doing, Saini was released from his original duties, given a new title ("Sub-Divisional Engineer, Rock Garden"), a salary and a workforce of 50 labourers and was encouraged to get on with the job. Saini would spend nearly12 hours a day at the garden, planning, building, sorting his piles of scrap or cultivating different plants. He never sold anything he created.

"I have had no formal education or training in art or drawing," he once said. "I get inspiration from the objects I see and the ideas begin to take shape in my mind. I have a good sense of imagination and capacity to work hard. They help me embody what I visualise. I humbly believe I have the ability to see beauty in what many people consider junk or scrap. I reckon it is God's gift to me."

Saini staged exhibitions of the Rock Garden figures in many cities of the world, including Berlin and London. In 1980, he built an exhibition at the Museum of Modern Art in Paris. In 1985, he created a smaller version of his garden at Capitol Children's Museum in Washington. He was given the keys to Baltimore.

Australia made a movie about Saini; France published a 500-page book on Rock Garden. India issued a Rock Garden stamp and honoured him with the Padma Shri. He received a number of other awards from across the globe.

He is survived by his wife, daughter, son and grandchildren.