One of the more vital contributions to Allied victory in World War II was made by the mathematician, Abraham Wald. 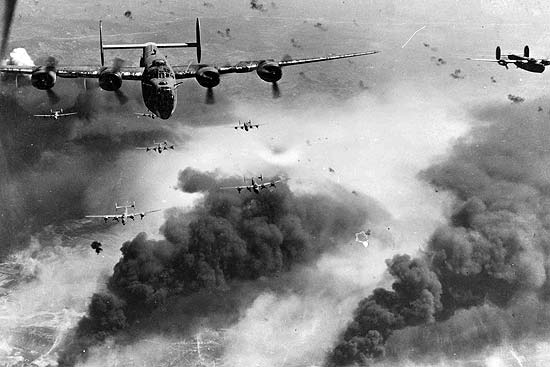 It was 1943. The tide of battle had turned. The Royal Air Force was conducting massive bombing raids into Germany every night.

However, the RAF was also suffering big losses. A lack of long-range fighters meant that heavily loaded bombers were flying unescorted. The bombers spent literally hours at a stretch over hostile skies. Typically, a raid might consist of a 1??,?500-2?,?000 km round trip. This took seven or eight hours in an Avro Lancaster. Most of that time, the bombers would be over enemy territory. Many bombers were being shot down, either by anti-aircraft ground fire, or by Luftwaffe fighters.

Designs for long-range fighters to do escort duty were on the drawing board. Methods to try and jam radar were also being developed. But quick fixes were needed. One bit of jugaad was suggested: fix armour plate onto aircraft.

Armour is heavy. It limits maneuverability. It also cuts down on range and bomb payload. So it was decided that armour would be fitted selectively to the most vulnerable areas. But how to decide which bits needed protection? Wald was asked to analyse the damage and recommend the armour coverage and design.

Like many Allied scientists, ?Abraham ?Wald was born on the "wrong" side. A Hungarian citizen; he had a Ph.D. from Vienna. Both Hungary and Austria were allies of Germany. But Wald was Jewish. He had fled before the Nazis rounded him up and sent him to concentration camp.

The RAF had lots of data on aircraft damage. Wald also inspected aircraft as they returned damaged from raids. He started simply by drawing cartoon pictures of aircraft and penciling in areas where damage typically occurred. His rough sketches showed that wings, nose and fuselage took the most hits. The tail, the engines and the cockpit tended to be undamaged.

Therefore, Wald recommended armour be placed to protect the cockpit, engines and tail.

It took a while for his logic to filter through. But it was ultimately accepted as impeccable. Wald pointed out that he was only getting data from aircraft that returned. Aircraft that got hit in other areas — in the cockpit, or tail, or engines? — did not make it back.

Wald specifically calculated that the highest chance of a single hit destroying an aircraft would be a cannon-shell hitting an engine, followed in terms of danger by a hit to the cockpit. The RAF armoured up according to Wald's advice. Aircraft losses declined overall. Aircraft that got hit in those places also started to limp back home as the armour provided some protection.

The mathematician made several important assumptions. One was that he thought the damage was random. That is, anti-aircraft gunners and German fighter pilots did not have the precision weaponry to target specific areas. They took shots in the general direction of the RAF bombers.

Wald's paper, "A method of estimating plane vulnerability based on damage of survivors", is often cited as a wonderful example of counter intuitive logic. Wald's methods still worked in Vietnam in the 1960s when aircraft designers noted that the US F-4 Phantom rarely returned if the tail was damaged. (They found a different design solution rather than using armour ). ?

?Of course, the assumption of random fire is no longer true in the modern era of precision armaments and more destructive weaponry. Afghanistan in the 1980s saw the extensive use of heat-seeking Stinger missiles fired from the shoulder to target Soviet choppers and MiGs. A single hit anywhere from a modern missile is likely to destroy aircraft and heat-seeking missiles directly target engines.

Wald's study is also often cited as an example of recognising and correcting for selection bias. Data was only gathered from planes that survived. Ergo, there was a selection bias — nobody studied planes that did not survive. ?

In this context, it is nice to recall another example. When motorcycle helmets became mandatory, hospitals noted that the number of bikers treated for head injuries had risen sharply. Guess why? That's right — in the pre-helmet era, those injuries were fatal.

Oddly enough, Wald and his wife died in a plane crash, in the Nilgiris, in 1950. He was travelling as a guest of the Indian government, which had invited him to deliver a series of lectures. He was only 48.