A Year of Failure

Despite an occasional counter-insurgency ‘success’ such as at Duli, the Maoists retain ample capacities to disrupt governance and to harass and selectively target the security forces 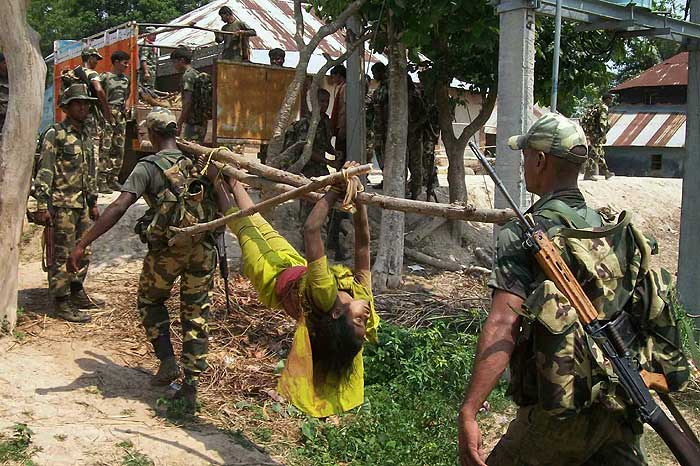 Police claimed that at least 12 Communist Party of India-Maoist (CPI-Maoist) cadres were killed, and ‘many others’ were injured, in an encounter with the security forces (SFs) at Duli village near Ranja forest in the Salboni Police Station area of West Midnapore district of West Bengal on June 16, 2010. Eight bodies were actually recovered, though senior Police officials said they had "information that four of the bodies were carried away by Maoists".

In their desperation to demonstrate a ‘notable success’ after more than a year of virtual breakdown in the West Midnapore district, the SFs, including both State Police and Central Paramilitary Force (CPMF) personnel, disgraced themselves by parading the enemy fallen strung out on poles like animal carcasses, to be photographed by the press. One ‘dreaded Naxalite’ also exhibited before the media, moreover, turned out to be a mentally challenged mute, reportedly from a village near the site of the encounter at Duli.

While the response from Delhi has been quick, condemning the manner in which the Maoist dead were flaunted before the media, significant damage had already been done. The incident will certainly provide grist for the CPI-Maoist propaganda mill. Crucially, however, it also demonstrates the unpreparedness – if not the incompetence – of the SFs to deal with the complexities of the campaign against the Maoists. While political rhetoric continues to muddy the issue with talk of ‘our own people’ and ‘political solutions’, with the centre making repeated and gratuitous offers of ‘talks’ with the Maoists, the message that has gone down to the forces appears to be to chalk up as many ‘kills’ as possible, and to use these in brutal displays of dominance across territories that are only nominally in the state’s control. Whether or not such ‘kills’ constitute any enduring gains within the context of a sustained counterinsurgency (CI) strategy seems irrelevant.

This is not to suggest that the state has not had some manifest successes beyond the macabre tally of Maoist fatalities. Bapi Mahato, a senior member of the People’s Committee against Police Atrocities (PCPA), the Maoist-backed grouping spearheading the disturbances in West Midnapore, was arrested by a joint team of the West Bengal and Jharkhand Police from the Adityapur area of Jamshedpur in Jharkhand on June 20, 2010. Mahato is the principal accused in the Gyaneshwari Express incident in which 148 persons were killed. Earlier, on June 4, Khagen Mahato, another prominent PCPA member, was arrested from Kharagpur in West Midnapore. On March 2, 2010, Venkateswar Reddy aka Telugu Dipak, was arrested from Sarshuna near Calcutta. Dipak was the suspected mastermind of the February 15, 2010, attack on the Eastern Frontier Rifles (EFR) camp at Silda, in which 24 EFR personnel and one civilian were killed. On June 18, 2010, State Chief Secretary Ardhendu Sen disclosed, moreover, that SFs operating in the Jungalmahal area, which includes Bankura, Purulia and West Midnapore districts, had arrested ‘about 400 to 500 Maoists’, though Koteswar Rao aka Kishanji, CPI-Maoist Politburo member in charge of West Bengal, Bihar, Jharkhand and Orissa, and the brain behind almost all the Maoist attacks in this region, remained elusive.

Nevertheless, police sources argue, the Duli operation reflects a new phase of the conflict around Lalgarh, which commenced in November 2008, after a failed assassination attempt targeting the state’s Chief Minister, Buddhadeb Bhattacharya. West Midnapore Superintendent of Police (SP) Manoj Verma, thus asserted, on June 17, "The situation in Lalgarh on 18th June 2009 was that the police couldn't enter the area. They couldn't leave police stations. They couldn't serve people. In comparison, today there is no such place that the police cannot enter."

It was on June 18, 2009 that the joint SFs, comprising state police and CPMF personnel, had launched their offensive against the Maoists in Lalgarh. For almost an year since then [till June 15, 2010] more than 4,000 troops launched repeated operations in Lalgarh and its adjacent areas, but failed to inflict any significant damage on the Maoist networks [there are currently an estimated 27 companies of CPMFs and 20 companies of State Armed Police operating in the area]. According to data compiled by the Institute for Conflict Management (ICM), a total of 28 Maoists had been killed during this entire period, as compared to 41 SFs. Moreover, a staggering total of 304 civilians had been killed by the Maoists in an around Lalgarh, including 148 killed in the Gyaneshwari Express derailment incident on May 28, 2010.

The most significant Maoist attacks included:

May 28, 2010: At least 148 passengers were killed when cadres of the Maoist-backed PCPA sabotaged the railway track between Khemasoli and Sardiha Railway Stations near Jhargram in West Midnapore district, causing the derailment of 13 coaches of the Gyaneshwari Express. Another 145 persons suffered injuries.

November 8, 2009: CPI-Maoist cadres killed four personnel of the EFR and looted their arms near a Police camp close to a school in Gidhni Bazaar area under Jamboni Police Station area of West Midnapore district.

The conflict around Lalgarh has passed through three distinct phases. In the first phase, between November 2008 and the first half of June 2009, the Maoists systematically fuelled tribal anger and hijacked the protest movement against the Police in Lalgarh, combining this campaign with the selective killing of ruling Communist Party of India-Marxist (CPI-M) cadres [these killings still continue]. The second phase commenced on June 18, 2009, when SF operations commenced, with the Maoists mainly offering defensive resistance to the SFs, and then gradually resuming their campaign of targeted annihilation against the CPI-M cadres and the anti-Maoist Gana Pratirodh Committee. The third phase began with the attack on the Sankrail Police Station on October 20, when the Maoists initiated a direct offensive against the SFs.

The Duli incident is being projected as a turnaround in this context. Police sources insist that the Maoist power has significantly been dented by infighting. In evidence, they note that Gurucharan Kisku aka Marshal, had formed his own squad on February 12, 2010, after accusing Koteswar Rao of failing to address tribal grievances. Kisku also declared that Rao was an ‘outsider’, and did not understand ‘tribal sentiments’. Police also claim to have been approached by ‘many Maoists’ in West Bengal, who are willing to surrender. On June 17, West Bengal Director General of Police (DGP) Bhupinder Singh stated, "We have received feelers that a number of people are willing to surrender. However, I can give you neither any numbers nor other details at this juncture." The state government had earlier announced a financial package for surrendering Maoists. The package followed Central Government guidelines, with a one-off payment of Rs  150,000, vocational training for three months, and Rs  2,000 in a monthly stipend for each surrendering cadre. If arms were also surrendered, they would receive Rs  15,000 for an AK-47 rifle, Rs  25,000 for a machine gun, and Rs  3,000 for a pistol or revolver, in addition.

Tales of imminent Maoist collapse due to internal dissensions and loss of morale have, however, long been a staple of police and intelligence folklore. Though individual conflicts have been a fact throughout the existence of the Naxalite movement, there is little reason to give credence to any expectations of an existential crisis within the rebel command structures in the foreseeable future. It would also be premature to ascribe any extraordinary strategic significance to the Duli operation, or to other SF successes, including the key arrests of the past months. The reality is that Maoist capacities in the area – and in the wider theatres they have come to dominate along India’s eastern board – show every sign of expansion, rather than any dramatic contraction, in the face of, at best, occasional SF successes.

Unconfirmed news reports, for instance, claim that at least 7,000 armed Maoists were active across the West Midnapore, Purulia and Bankura districts in West Bengal, and beyond, into the East Singhbhum district in the neighbouring state of Jharkhand. The numbers are not entirely incredible, if both armed Maoist squads and the people’s militia are taken into account. The Maoists have demonstrated capacities to assemble several hundred cadres and militia in several operations and, in some cases, such numbers have run well over a thousand. In the February 2, 2010, incident at a police station in the Bankura district, for instance, a mob of an estimated 2,000 persons had assembled to confront the police. Similarly, on May 3, 2009, several thousand tribals and villagers backed by Maoist armed cadres had overrun and destroyed government buildings at the Kalaimuri police camp near Lalgarh.

Maoist recruitment also continues in full swing in the Jangalmahal area, with reports suggesting that mobilisers are targeting and training significant numbers of teenagers as well. On May 11, 2010, West Midnapore SP Manoj Verma had disclosed that "Maoists have often been pushing teenagers into the frontlines of action. The boys are offered a monthly amount of Rs  2, 500." In the June 16 incident, Police records indicate that six of the dead were about 15 or 16 years old. Bela, the eldest female cadre killed, was a 20-year-old.

The Duli incident also demonstrated the robust networks that exist across the West Bengal – Jharkhand state borders. One of the dead, Arjun, has been identified as a member of a squad led by Bikash in Jharkhand, and forested areas along the Jharkhand-West Bengal as well as the Orissa-West Bengal border have been dominated by the Maoists for years now.

Significantly, within West Bengal, according to statistics compiled by the Union Ministry of Home Affairs, between January 1, 2010, and May 30, 2010, the Maoists had killed 291 persons, including 230 civilians and 61 SF personnel. The ICM database put this toll at 249, including 217 civilians and 32 SF personnel. Significantly, most of these fatalities occurred within the West Midnapore district, within which Lalgarh falls; and all but one of these occurred in the Jangalmahal area.

The Maoists also continue to draw significant support from ‘civil society’ groups, despite the union government’s threat that anyone found supporting the Maoists would be dealt with ‘sternly’. A day before the June 16 encounter, police arrested three persons from Kolkata — a scientist, a college teacher and a writer — and 10 PCPA cadres from the area around the encounter site.

Worse, in the election-bound state, the rivalry between the ruling CPI-M and the opposition Trinamool Congress led by union minister of railways Mamata Banerjee, has undermined any possible political agreement on dealing with the Maoists. Mamta Banrjee, had, in fact, blamed the CPI-M for the Gyaneshwari Express derailment, and had demanded a Central Bureau of Investigation (CBI) probe. On June 17, however, the CBI named three cadres of the PCPA - Bapi Mahato, Umakanta Mahato and Asit Mahato – as the key accused in the case and declared a cash reward of Rs  100,000 for information on their whereabouts.

There is, of course, much talk of significant capacity augmentation in CI forces in West Bengal. The state’s DGP has spoken about raising a 1,000-strong CI force patterned on the Greyhounds in Andhra Pradesh, and a special combat force of 3,500 personnel. The state government has also urged the centre to augment deployment of CPMFs in the affected area. All this, however, remains very much in the future. For the moment, the Maoists retain ample capacities to disrupt governance and to harass and selectively target the SFs. And, for each CI ‘success’, the Maoists are still chalking up several of their own.