During his two-day visit in end-June Kejriwal came, saw and conquered Goa 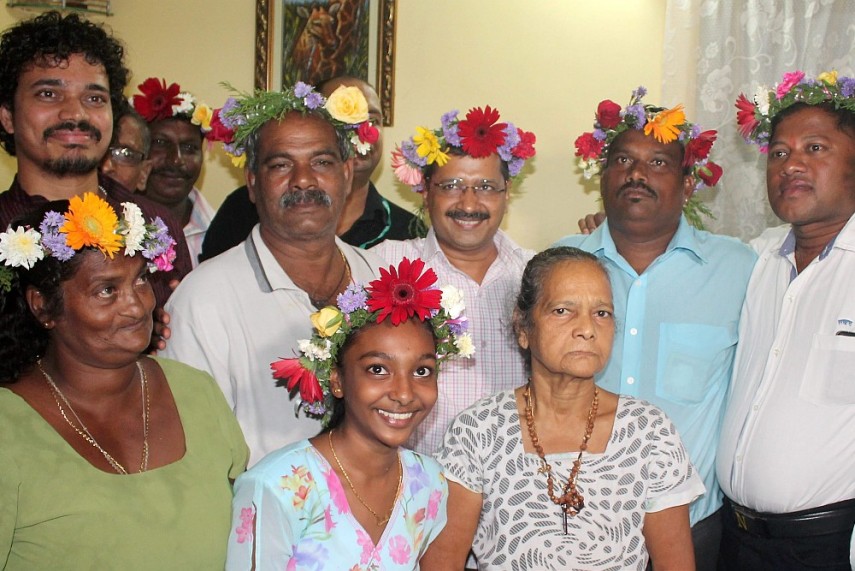 AAP is the new game in town

Aam Aadmi Party leader and Delhi CM Arvind Kejriwal’s preferred to stay at AAP national executive member and Goa leader, Dinesh Vaghela’s flat near Panaji instead of at the Raj Bhavan where the resident Governor Mridula Sinha is seen as a RSS acolyte.

During his two-day visit in end-June Kejriwal came, saw and conquered Goa, it would seem. Goans have been observing that the Congress has not learned the lessons they handed in the ballot box in 2012. And have also concluded that the BJP, to whom they gave the thumbs up, has blotted its copy book on every issue close to their heart. For instance, there’s a fifth offshore casino in the Mandovi and acres of land in this small state is given over for golf greens/ ‘model’ village, jetties all in the name of investment and what’s more, far from the election promise of “zero tolerance” for corruption, MLAs and ministers are seeming tainted.

Kejriwal moved around the state meeting a cross-section of people and associations including a dialogue with small hotel and guesthouse owners at Calangute. He tapped into the burning issue among fishermen who fear that the dredging by the Mormugoa Port Trust for a cruise terminal will rob them off their livelihood. Kejriwal later said, “We did not select Goa, but Goa is ready for a new form of governance.”

Saying one thing, doing another

PM Narendra Modi asked CM Parsekar straight some weeks ago when the latter went to Delhi: Does the BJP need to be concerned about the ripples AAP is creating? The CM brushed it aside.

But the BJP is rattled by AAP’s likeability quotient among Goans. And that was evident when his government sent Vaghela a site inspection notice about two weeks ago on the AAP’s office which functions from two flats (both owned by Vaghela) in an old building where there are illegal garages and shops. “AAP is mentioned twice in the same notice even though the letter is in reference to an alleged illegal construction by some persons,” said the party. Added Vaghela, “This is the BJP’s speciality. When they have no reply, they resort to a personal attack to divert attention from the issue.”

Vaghela’s explanation is that the notice came as a tit for tat for AAP writing a letter to the CM demanding an explanation for the abrupt transfer of two anti-corruption bureau officers who had caught Parsekar’s brother-in-law Ghanshyam Malvankar (a Goa industrial development corporation (GIDC) field officer) on August 19, 2015 while taking a bribe of 1 lakh from a pharmaceutical company to allow a plot in Tuem industrial estate.

Malvankar, from whose bank locker the ACB seized Rs 7.5 lakh in cash, two gold chips of 100g each and gold jewellery worth Rs 15 lakh, and who was suspended then was reinstated recently, a move. Parsekar has been hard put to justify. “He was suspended from service, not terminated. The law is equal for all,” Parsekar said but is unable to answer critics who question, why other government officers, who have been suspended, have not been reinstated like his relative was.

If one were to go by birthday extravaganzas of mantris, CM Laxmikant Parsekar’s bash for his 60th last week was relatively low profile as compared to Defence Minister, Manohar Parrikar’s (who flew here by a defence aircraft for his succcesor’s birthday) last December when he turned 60. An indicator again that Parrikar is the tallest leader in the BJP, which used Parsekar’s birthday to get into election mode with polls a few months away.

But for Parsekar personally never had his birthday been such a big deal, which explains why he broke down at all the praise heaped upon him. Parrikar was generous saying, “It was like Parsekar was left with the task of completing half-cooked food,” in reference to his sudden move to Delhi in November 2014. The jury is still out whether Parsekar finished the half-cooked food or left it half-baked as did Parrikar going by the dissatisfied noises that are getting louder.

No one referred to the heartburn that Parsekar’s deputy, Francis D’Souza had articulated when he was left out of the race for CM, or the speculation that the RSS preferred environment minister Rajendra Arlekar. In fact, D’Souza, who was present at the bash, along with the other Catholic MLA Michael Lobo, is more and more vocal in criticizing Parsekar’s moves, an indication that the weather-vane is whispering that Goa’s 25 percent Catholic community, which made it possible for the BJP to come to power in 2012, is disillusioned.

Say No to drugs?

Goa, over the years is seeing a decline in those coming for the sun and sea. Now, increasingly those coming here come because it is perceived as a drug-magnet, a gambler’s paradise even a tippler’s utopia, usually the bane of tourist destinations. Goans are furious, partly because the problems are slowly making inroads to the local population.

And angrier because successive governments have paid lip service but done nothing on the ground. In fact, some years ago, the then home minister’s son was reportedly cosy with drug lords and it’s no secret that an alleged drug kingpin (Yaniv Benaim aka Atala) who operated because of the politician-police-drug dealer nexus was allowed to slide.

But a Bollywood film or a TV serial referring to this image raises hackles. Tourism minister Dilip Parulekar was affronted with Bollywood’s upcoming crime thriller ‘Missing On AWeekend’ which refers to Goa as a place for “drugs, crime and prostitution”. Parulekar said, “More than tourism, the movie will affect the overall branding of the State.” Recently TV’s longest running serial “Tarak Mehta Ka Ooltah Chashmah” referred to Goa as a drug haven. For a while now cultural references in films have tended to portray Goa in a bad light.

But even studies have come to the same conclusion. Some months ago, Albert Pinheiro, Assistant Commissioner of Customs, Mumbai, while conducting a session for 35 members of Goa Police’s Anti-Narcotics task force, said the same thing - “Goa continues to be a drug hub in the international drug market besides providing an ample market for consumption and offering an extensive peddling network within the State.”

Then you have Muktesh Chander, Goa’s Director General of Police saying ,“Goa should not be allowed to become an ‘Udta Punjab’. On a flippant level, the makers of the film, which ran into controversy recently, should probably give him a share of the marketing budget for his “Everyone should watch the movie as it sheds light on the drug menace in Punjab.”

But his statement created angst and anger. It’s being pointed out that as the top-cop, he is the one armed with the information and background about Goa’s descent into a drug destination, he should handle it. His appeal that people share information with the police is treated with contempt because there is a house committee report, now buried, that talked about the police being hand in glove with drug dons.

But the CM’s statement was more realistic. “We want that tourists go back with good memories of Goa being a scenic destination and a place where drugs are not available. We need to change the image of Goa on the globe as the place where drugs are freely available,” he said. Just a pretty speech for International Day Against Drug Abuse & Illicit Trafficking ?