The 33-year-old Briton, who reeled off the 11th win of a dominant season that brought him his fifth drivers' world championship ahead of four-time champ Sebastian Vettel. 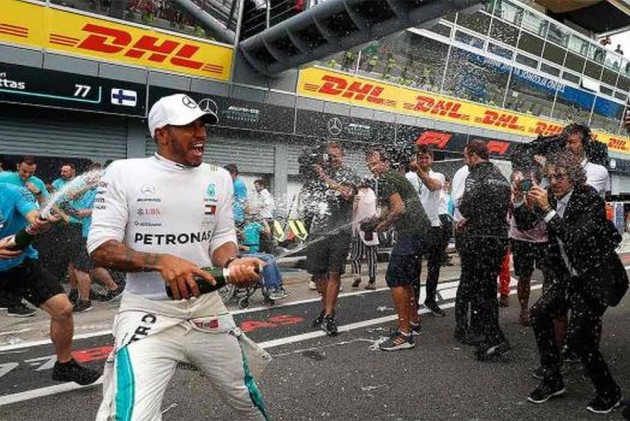 Lewis Hamilton ended his near-perfect 2018 with a typically assured victory in Sunday's eventful season-ending Abu Dhabi Grand Prix amid topless celebrations and farewells on an emotional evening at the Yas Marina Circuit.

The 33-year-old Briton, who reeled off the 11th win of a dominant season that brought him his fifth drivers' world championship ahead of four-time champ Sebastian Vettel, showed off his tattooed torso on the podium amid goodbyes for former foe Fernando Alonso, who retired from F1 after 17 years and 311 GPs.

"I really wanted to end the season strong," said Hamilton, who won the F1 championship last month in Mexico.

"The team did an exceptional job all year long, and I really wanted, race on, race off, to deliver for them and wanted to end the way that I plan to start next year. That was kind of the new psyche."

Hamilton's latest win came after Nico Hulkenberg survived a spectacular accident on the opening lap -- escaping unhurst as flames licked around him while he hung on the barriers "like a cow" in his upside-down Renault.

Hulkenberg smiled as he recalled the experience of hanging in his car while "the barbecue was lit" behind him.

The German driver's accident came after tangling with Romain Grosjean's Haas led to a Safety Car intervention, but neither that, nor the later deployment of a Virtual Safety Car, could stop Hamilton from triumphing.

Mercedes team manager Tom Wolff said that for Hamilton and the team it was important to maintain impetus as they head towards defending their record-equalling sequence of five consecutive drivers' and teams' double title wins next year.

"It was a great fight this season with Ferrari and then Red Bull came into the mix and there were six cars able to win -- that's why the television ratings increased."

"It's been a real honour and a privilege racing against Sebastian," said Hamilton.

"I've known him since our Formula Three days and he's an honest driver who has always raced his heart out.

"I know he's going to come back strong next year."