Adding Colour To An Adulting World 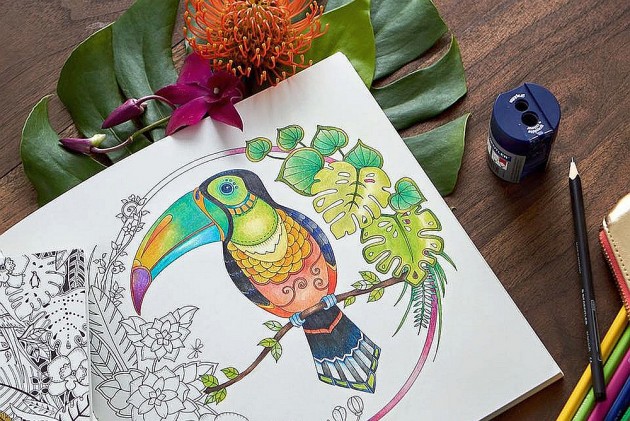 Sprawled on the bed, head bent in seeming concentration over the large black-and-white book, Kavita Chowdhary is scrambling through her 100-something colour pencil collection to find the perfect turquoise blue. Chowdhary, 53, has just returned from a long day at work, to mysteriously find a hummingbird hiding behind the bushes in the 'Enchanted Forest': a few more hours of colouring in, and her 'masterpiece' will be complete. Chowdhary is not an artist; she is what they call a colourist, one of many enthusiasts who are "magically" popping up as customers for the growing industry of colouring books for adults.

Adult colouring books are exactly what the name suggests: colouring books for adults. The trend started in 2014, with Johanna Basford bringing out the first book, Secret Garden, a collection of line drawings inspired by her grandpa's love for gardening, and all living things in it. Since then the market has been flooded with colouring books of all kinds, with buyers flocking to them. In India, the trend is only catching up, but in a big way, with most publishing houses coming out with titles of their own. There is Devdutt Pattnaik's rendition of Mahabharata and Ramayana stories The Sita Colouring Book and The Jaya Colouring Book; and another inspired by the Mughal Gardens called Bagh-e-Bahar, all by Penguin Books. Hachette India has brought out Dream Cities — colouring for calm and Secret Japan. Then there are individual and self-published works like those of illustrators Subadra Kalyanaraman, Indu Harikumar, and Sujaya Batra. "The market response to the idea has been great in its nascent stage, and is only getting bigger," says Kapil Kapoor, director at Roli Books, which brought Johanna Basford's collection to India.

What is the difference between these colouring books and those for children? "The intricacy of the designs, the narratives that the line drawings tell, and the need for a steady hand," says Batra, a textile designer-turned-illustrator, who recently released The Mystical Land, a book based on Khalil Gibran's The Prophet and inspired by nature. Each colouring book has its own set of characteristics and themes. "There are endless possibilities in the way one can colour in an adult colouring book. It is not just a take-colour-pencils-and-fill-the-page-randomly-with-colours kind of an activity. I have seen people work magic by using so many different colouring tools," says Kalyanaraman, whose book Shakuntala and Her Magic Box recently hit the market.

While some books are only designs, some are illustrations of what we see around — trees, leaves, flowers, wilderness, animals, even constellations, and some are storybook narrations made in illustration, all waiting to be coloured. "As a doodler of mehendi designs, I was immediately captivated by Giant Mandalas and picked up the book immediately. Three months into the book, I am now considering buying a story book for colouring,”" says colourist Poorva Joshi, 23. With the level of complexity of drawings in the books, colouring in requires dexterity, detailed work, and time-consuming filling in. "Patience is paramount," says Basford. So consuming is the colouring book that Sonali Basu, 29, has taken almost three years to finish the book her aunt got her from London.

But this level of involvement is the biggest selling point of adult colouring books. The gentle stimulation, coupled with minimal activity helps calm the mind. It is like meditation, many claim. Harikumar, whose book Beauty Needs Space has mindfulness as its theme, says, "Colouring helps you switch off, and brings the mind to focus, and calmness." Batra agrees: "The intricate drawings in an adult colouring book require a great deal of concentration, which transports you away from the stress to a relaxing place." In fact, it is this very reason that Chowdhary turned colourist. "It is a good, self-indulgent activity, to come home to after a long day of work, away from the TV and the phone — and even human intrusions," she says, a sense of peace on her face.

Even psychiatrists recommend colouring books for adults as great stress-busters, and also as an active part of therapy. "I often recommend colouring as an activity for patients dealing with mild depression. And for people with mild cognitive impairment, the onset of Alzheimer's, colouring is an excellent activity as it helps connectivity with brains, and expression through fine motor skills," says Brahmdeep Sindhu, a psychiatrist at Civil Hospital, Gurgaon. It is perhaps the idea of being transported to a time when you didn't have a mortgage, a mean boss, or money troubles, which is perhaps the biggest appeal of colouring books. "A reminder of carefree days," says Basford. She has received numerous letters from users: from an investment banker de-stressing on his lunch break, a busy mum taking an hour for herself, and a cancer patient keeping their hands busy during chemo! Daryl Cagle, the South California-based editorial cartoonist, has recently published colouring books for the political-minded: a stress-reliever at the time of political insanity. Colouring, he says in an interview with the Washington Post, is like a church: a familiar setting where reassurance of preconceived views is calming.

Another reason why Batra believes colouring appeals to adults is "because everyone has a creative spark". "An empty sheet of paper can be daunting, but a colouring book offers a gentle buffer to those with blank-canvas anxiety," chuckles Basford. Kalyanaraman agrees, "Regardless of how creatively challenged you are feeling, the output is going to look great". For the likes of Basu, who sits with her sister to colour every weekend, it is a great bonding activity. "A lot better than going out for coffee," she sighs.

Whatever be the reason for the appeal, the demand for this blissfully submersible creative activity has gone up, with almost all publishers and illustrators working on new adult colouring books. Basford who has three nature-based colouring books so far — Secret Garden, Enchanted Forest, and Lost Ocean, is set to launch her fourth, Magical Jungle. Harikumar is working on her second book, after her first limited collection sold out in a wink, and Batra and Kalyanaraman already has an idea which she think would make for a relaxing, thought-provoking book. Even Kapoor thinks the best is yet to come, and more and more publishers and illustrators are likely to explore the idea.

And to think that all this fervor was the result of unwitting art! "A few years ago, I had created an online series for people to download as wallpapers, as a way to widen my profile and connect with potential clients," says Basford. Before she knew it, one of her downloaders — an editor at a publishing house — got in touch to create a children's colouring book, which later became an adult colouring book on Basford's suggestion. "We were unsure of the demand, but the way it has picked up is great," says Basford. Harikumar has a similar success story. Unsure of the demand in India, she began creating illustrations and putting them online for people to download and colour, but high demand led her to bring out a self-published limited edition book. "It has gone around the world," she exclaims. And publishers bringing out colouring books based on fiction, like Game of Thrones, Mills and Boon series, or the Harry Potter saga testifies to the craze.

But, whether this is, a passing fad or an experiential activity that will stay on, is still hard to establish. Many like Chowdhary, who are picky about their colouring books, preferring ones with thinner lines, think it is a passing indulgence. "Colouring is a labourious, tedious activity, one which does not have mass appeal. It is likely to become a lot more niche once the craze passes," she says. Basu, who has been colouring before the craze hit India, agrees. For others like Batra and Harikumar, the detox value it adds to the increasingly stressful lives people lead is reason enough for it to stay on. Perhaps the fact that there are colouring parties being organised this very moment around the globe, and that, since the onset of the colouring craze, America has declared August 2 as National Colouring Day, says something about the institutionalisation and the probable longevity of the 'colouring for adults' activity.