For the third day running, bad light played spoilsport but that did not prevent the Proteas from tightening the screws -- the hosts built up a 152-run lead after bowling out India for 240. The Indians showed poor application on a sporting Kingsmead track to be bundled out for 240 in their first innings and concede an 88-run lead to the hosts who pressed home the advantage by reaching 64 for no loss at close on the third day for an overall lead of 152.

South African skipper Graeme Smith, battling a miserable form slump, was unbeaten on 28 while AB de Villiers was on 31 when play was called off early for the third day running due to bad light.

Heavy clouds throughout the day forced the match to be conducted under floodlights but against all odds it did not rain.

India, who resumed at overnight 103 for 3, could not go beyond 240, built largely on half centuries by Sachin Tendulkar (63) and VVS Laxman (50) and a plucky 28 by tailender S Sreesanth.

South Africa then had their best start of the series -- in fact the best opening stand for either side in this engrossing series which India lead 1-0.

Much of the drama centred around the final session when the match was stopped because of power failure after 46 minutes of play; then resumed after 39 minutes of interruption and finally, stopped again, after only eight further balls had been bowled.

Initially, Smith and De Villiers were reluctant to go off the field after power had failed and three of the four floodlight towers had stopped functioning.

But then VRV Singh bowled a lifting delivery which nearly took the head off De Villiers and after couple of minutes, Smith from the other end sought to take the option of poor light.

Once power was restored, umpires Asad Rauf and Ian Howell, substituting for Mark Benson who left the field this morning after five minutes because of palpitations in the heart, asked for the game to be resumed but only after eight deliveries, once again put an end to proceedings, this time at the behest of the fielding side because of poor light.

Smith and De Villiers tried to argue their case but it was a case of no go as the match ended with 36 overs for the day still to be bowled, a shortage of 80 overs from three days' proceedings.

The morning belonged to the hosts who reduced the Indians to 183 for 8 in the extended first session of two and half hours.

Earlier, Tendulkar brought up his first fifty in 2006 and Laxman scored a patient 50 but finally ran out of partners at the other end.

Resuming on the overnight score of 103 for three India lost five wickets for just 80 runs in the first session.

Tendulkar fell after a 64-run partnership with Laxman. He was caught behind by Mark Boucher off Makhaya Ntini for 63. His knock included 11 hits to the fence.

The bowler picked up his second Test wicket an over later. He had Anil Kumble caught by Boucher for naught. Morkel added a third against his name, Zaheer Khan caught by Hashim Amla for two. 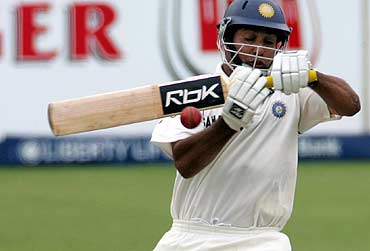 In the post-lunch session, S Sreesanth and Laxman put on an invaluable 52 runs for the ninth wicket to take India past the 200-run mark. Sreesanth made 28 before he was dismissed by Andrew Hall, caught behind by Boucher.

VRV Singh was the last man to go, caught behind by Boucher off Shaun Pollock for four.