After 46 Years, Karunanidhi Bids Adieu To His Trademark Dark Glasses 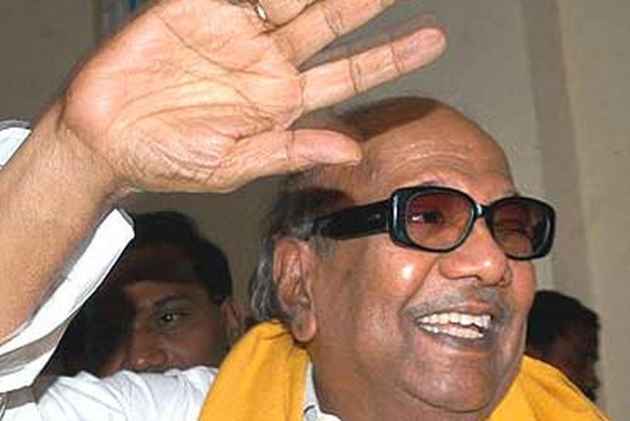 At age 93, DMK supremo M Karunanidhi has bid adieu to his trademark dark glasses after wearing it for 46 years.

The five-time chief minister has now got a new pair of spectacles with tinted glasses and lightweight frame.

A latest photograph of Karunanidhi, also a playwright and a poet, wearing his new pair of spectacles has now come out in public. For those who know him, dark glasses and yellow shawl have been the trademarks of Karunanidhi for long.

According to a report by The Hindu, Chennai-based Vijaya Opticals imported the glasses from Germany after a 40-day search.

A statement from Vijaya Opticals said, "The pair he had been wearing was heavy and uncomfortable.”

Karunanidhi was advised by his doctor to change the glasses.

"His son Tamilarasu approached us to get them changed. After searching for a suitable pair across the country for 40 days, we sourced a new lightweight frame from abroad. It has prescription tinted glasses in amber brown. He felt very comfortable wearing them; he smiled to acknowledge as much," The Times of India quoted from the statement.

When asked about Karunanidhi’s style change, DMK Rajya Sabha member TKS Elangovan told Outlook that Kalaignar has always been style conscious. “He shaves every day and never changed his style of wearing yellow shawl,” said Elangovan, who has known Karunanidhi since childhood as his father T.K. Srinivasan, a DMK member and a Rajya Sabha member, had close relation with Karunanidhi.

Elangovan recalled that Karunanidhi started searing dark glasses after he met with an accident in the late 1960s that damaged his left eye.

“Nowadays, he doesn’t go outside as he is unwell. So, he must have thought it is okay to change it. Also, it must have caused him discomfort,” he said. Interestingly, Karunanidhi’s friend-turned rival MGR also had made dark glasses a trademark. A Pair of sunglasses, hat, and watch were the style statements for MGR. It is said that MGR was buried with his glasses and hat after his death. The Karunanidhi-MGR duo had even created a dark glass craze in Tamil Nadu with many people imitating the leaders’ style.