The UK is due to leave the 28-member European Union on March 29, 2019, but the two sides have yet to agree how trade will work between them afterwards. 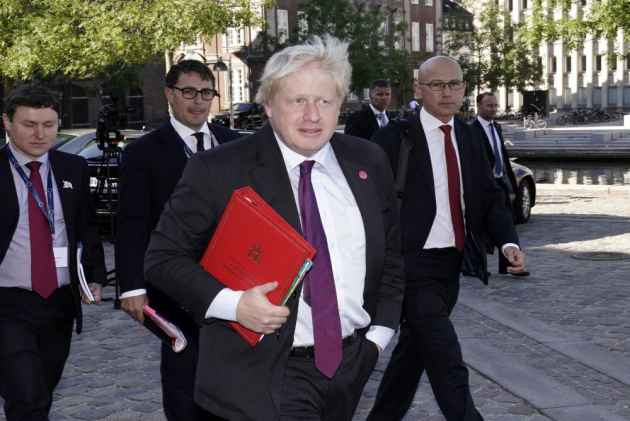 The government of British Prime Minister Theresa May was plunged into turmoil on Monday with the resignation of two senior Cabinet ministers, including Foreign Secretary Boris Johnson, signalling a growing split over her strategy to quit the European Union next year.

Johnson, the poster boy in the Cabinet for pro-Brexit ministers, quit, hours after the resignation of the minister in charge of Brexit negotiations, David Davis.

Their decision to leave the government came three days after May appeared to have agreed a deal with her fractured Cabinet on the UK's post-Brexit relationship with the EU. That plan is now in tatters and her political future appears uncertain.

Johnson did not arrive at the Foreign Office near Downing Street this morning, triggering speculation over further trouble ahead for the embattled British Prime Minister.

“This afternoon, the Prime Minister accepted the resignation of Boris Johnson as foreign secretary. His replacement will be announced shortly. The Prime Minister thanks Boris for his work,” a Downing Street spokesperson said.

May told Parliament that she did not agree with the two ex-ministers about "the best way to honour" the result of the 2016 Brexit vote.

The UK is due to leave the 28-member European Union on March 29, 2019, but the two sides have yet to agree how trade will work between them afterwards.

It had been widely reported that Johnson was not supportive of May's latest Brexit plans, thrashed out at a crucial meeting last Friday. However, there seemed to have been a shaky truce in place until Brexit minister Davis, resigned from the Cabinet stating policy differences over her exit plan from the European Union, but insisted that he had no plans of backing a revolt against May.

The Secretary of State for Exiting the EU said he remained “unpersuaded” about the government's negotiating position, just days after the British Prime Minister had rallied her Cabinet to a crucial away day at her country retreat, Chequers, to thrash out a “collective” position on the issue.

May quickly announced a replacement for Davis, with Dominic Raab taking charge of day to day negotiations as the new Brexit minister. Raab, previously housing minister in the Cabinet, has been promoted largely because he was a prominent Leave campaigner during the 2016 EU referendum and likely to appeal to grumbling hard-Brexit MPs.

In his resignation letter, Davis said it looked "less and less likely" the Conservative party would deliver on the Brexit result and the commitment to leave the EU Customs Union and Single Market – dubbed by many as a “soft” Brexit.

"The general direction of policy will leave us in at best a weak negotiating position, and possibly an inescapable one," Davis wrote.

"I am also unpersuaded that our negotiating approach will not just lead to further demands for concession," he says in the letter addressed to May.

He ends by saying that May needs "an enthusiastic believer in your approach, and not merely a reluctant conscript".

While he accused the British Prime Minister of “giving away too much, too easily” to negotiators in Brussels, Davis insisted that he still believes she is the best person for the job of delivering Brexit.

In her own letter, May thanked Davis for his service, but adds: "I do not agree with your characterisation of the policy we agreed at Cabinet on Friday."

Hitting back at his claims, May sets out 12 points "how we will deliver on the result of the referendum and the commitments we made in our manifesto".

She is set to face her disgruntled party MPs at a meeting of the powerful backbench 1922 Committee. A leadership contest would be triggered if 48 Conservative MPs formally submit letters, and some have already reportedly been sent to the Committee.

The key differences within the Tories remain over how far the UK should prioritise the economy by compromising on issues.

Davis' departure from the Department for Exiting the European Union, which he set up from scratch after his appointment in the wake of the Brexit referendum in June 2016, was followed by the resignation of another Brexit junior minister, Steve Baker.

The latest move is expected to put pressure on other Eurosceptic ministers, already toying with the idea of whether to resign over what is being perceived as a soft Brexit strategy by May. This has led to growing doubts about whether the British Prime Minister, already functioning on a slim majority, has the votes to push her Brexit plan through Parliament should a deal be reached with the EU in the coming months.

May's Conservative Party only has a majority in Parliament with the support in key votes of the 10 MPs from Northern Ireland's Democratic Unionist Party.

The prospect of Brexiteer Tories joining forces with Opposition parties, despite their own differences, to throw out the deal now seem more and more likely. This would leave the entire Brexit process in chaos as the March 29, 2019 deadline for Britain's exit from the economic bloc nears.

EU leaders have already warned that time is running out to get a Brexit deal sorted and the latest Cabinet resignation is expected to throw the process into further disarray as British officials prepare to travel to Brussels this week for the next round of talks.